From genes to kilos

A biotechnology facility with a difference has opened on Teesside, UK - this one is open access. Its objective is to help turn bright biotech ideas into commercial success.

The National Industrial Biotechnology Facility (NIBF), a ?12 million centre set up in former ICI labs, is a not-for-profit facility that aims to allow academics and companies to assess whether their new ideas will work as well on a commercial scale as they do on the bench.

’There was this fantastic academic research going on,’ explains Chris Dowle, director of advanced processing at NIBF, ’but it wasn’t easy for many companies, and certainly not smaller companies, to bring forward these ideas - to scale them up, test them out economically, verify that they work in the way they were intended to work. And that’s where we began to have the idea to create such a scale-up facility.’ 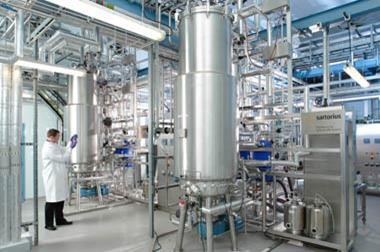 The NIBF has two 1000 L reactors, as well as continuous flow reactors

NIBF is integrally linked with the Centre of Excellence for Biocatalysis, Biotransformations and Biocatalytic Manufacture (CoEBio3) in Manchester. ’What we do here is very much the early stage research and discovery of novel biocatalysts,’ said Nick Turner, Director of CoEBio3, ’and the idea was to link in with a facility that had scale-up capability. We work with the NIBF on projects to bring in industrial customers, based on what we call the genes to kilos concept.’ A series of projects will transfer from CoEBio3 to NIBF over the next 12 months, added Turner.

This ’genes to kilos’ open-access service is unique in the world, Turner told Chemistry World. ’We deliberately set this up to be the only facility of its type,’ he said. ’We have a very extensive network of companies that we interact with, and they generally tell us they can’t find this anywhere else, outside of private industry.’

Other institutes tend be either strong on basic research, or strong on scale-up, but not both, according to Turner. For example, the Research Centre Applied Biocatalysis at the Technical University of Graz in Austria is strong in research but not in scale-up, he said. ’What we’re doing with places like Graz that don’t have this facility is saying, you can have access to our facility,’ said Turner.

State of the art

’Flexibility of operations is key when you have a succession of projects, and a succession of customers,’ said Jerry Cooper, Operations Manager of NIBF. The facility has a range of skid-mounted equipment that can be connected up as projects require. Reaction vessels are monitored, and valves opened and closed, remotely via computer. ’This makes the facility very cost-effective, said Cooper. ’Just two teams of two can run the facility around the clock.’

The state of the art equipment used at NIBF, like continuous flow reactors and marine fermenters, hasn’t gone unnoticed. ’We’ve already been approached by equipment sellers asking us to test out their new products,’ said Cooper.

Reducing the potentially prohibitive costs of commercialising biotechnology is one of the main aims behind the facility. ’The resources for converting science to wealth need to be 50 times larger than what goes in to the original science,’ estimates Nigel Perry, CEO of the Centre for Process Innovation, the not-for-profit organisation of which NIBF is part. Companies can use the facility to collect the necessary data to prove to potential financial backers that their ideas are commercially viable.

The CPI incorporates several technology platforms, including the Fuel Cells Application Facility, with a similar purpose to NIBF - putting existing technology into real life, commercial applications. The next facility to open at CPI will be a biofuel plant, which will be closely linked to the fuel cell group, said Dowle. ’We already have organisms to convert waste into hydrogen or methanol [to power the fuel cells],’ he adds.

’We think [CoEBio3 and NIBF] will have a significant impact on the UK chemical industry,’ said Nick Turner. ’We set ourselves up to service the pharmaceutical industry, which is where our main contacts had come from. But where we’ve seen the really big growth has been in non-traditional areas like fine chemicals, cosmetics, fragrances, biofuels.’