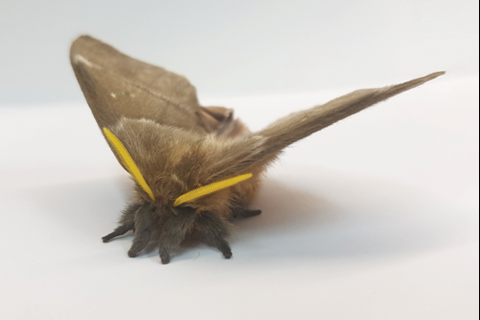 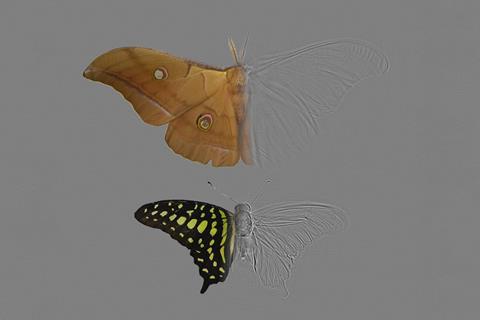 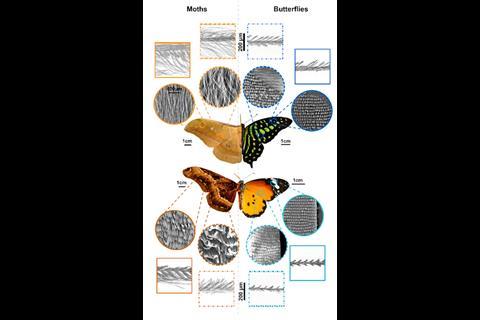 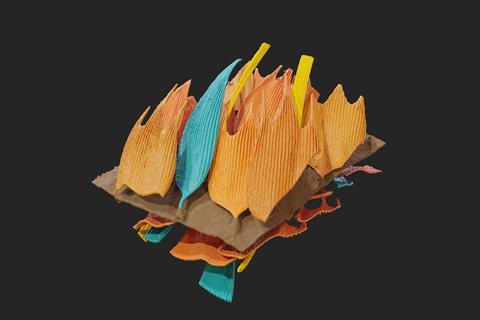 False-colour 3D representation of a 0.21 mm x 0.28 mm wing section of the moth Lasiocampa quercus showing structure, diversity, and arrangement of base scales (orange) and cover scales (blue and yellow)

Moths can hide from the sonar of feeding bats using their acoustically camouflaged wings. Their evolved stealth adaptation is the result of an array of scales attached to their wing membranes that absorb ultrasound frequencies emitted by hunting bats, and are the first acoustic metamaterials found in nature.

A University of Bristol team discovered that sound waves from bats that hit the fork-shaped scales found on two species of moth cause them to bend and twist, dissipating the energy. ‘Less sound is reflected back to the bat, and the moth thereby disappears or partially disappears from the bat’s sonar screen,’ explains Marc Holderied, an acoustic biologist at the University of Bristol, UK.

The strategy differs from one that his team reported earlier this year, whereby fur on a moth’s body absorbs on average 69% of ultrasound energy. ‘We showed that body fur is not much different from our traditional sound absorbers that we use in our buildings,’ Holderied explains.

Wings necessitate a thinner material and different strategy. The scales are less than a millimetre long and only a few hundred micrometres thick and each one resonates at a particular frequency. Added together, tens of thousands of individually tuned scales absorb at least three octaves of sound. ‘An assembly of resonators each absorb at their individual frequency, but they are then arranged in a way that they interact and collectively act as a metamaterial, creating broadband absorption,’ says Holderied.

The fine structure of each scale is remarkable. ‘They are highly structured on a nanometre scale with strongly perforated corrugated top and bottom layers that are interconnected by a network of minute pillars,’ explains Holderied.

The acoustic cloak works between 20kHz and 160kHz, performing best at lower frequencies, around the ranges that bats scan for prey. Peak absorption occurred at 78kHz, with 72% of sound absorbed.

The passive stealth wing scales were found in two species, the Chinese tusar moth (Antheraea pernyi) and Dactyloceras lucina, a large African moth. These were chosen because they do not have ears to hear approaching bats, an adaptation that has evolved many times in insects over the last 50 million years. Holdereid describes the emergent stealth property as ‘absolutely stunning’, and one that relies on principles that engineers have only just begun to explore.

‘I haven’t seen anything quite like this in a manmade technology,’ says Trevor Cox, an acoustic engineer at the University of Salford, Manchester. ‘Getting things to work across the frequency range is one of the big challenges. One approach is to use porous absorption, so materials like mineral wool, but this requires lots of material.’

‘If you want to absorb lower frequencies and use less material, you have to use resonance,’ Cox explains. Space and weight is at a premium in planes and cars so the search is on for lighter sound-absorbing materials. ‘There’s a tremendous amount of acoustic absorption [material] in cars shunted around by petrol or diesel,’ says Cox. ‘Getting lighter materials is really important.’

Holderied says it could be possible to make materials ‘10 times more efficient at absorbing sounds than what we are using in our homes and offices’. Think sound-absorbing wallpaper, not panels, he adds.