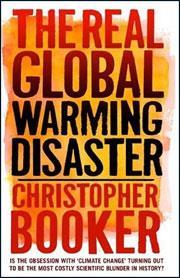 Although global warming is one of the most important topics today, it is difficult to get an overall view of the subject. This book aims to do this by giving both sides of the argument. The author initially sets the scene by showing how the issue began in the early 1970s and then describes how it developed during the next three decades to mid-2009, with appropriate technical detail.

All the scientific evidence on which the UN Intergovernmental Panel on Climate Change (IPCC) has based its conclusion - that global warming is the result of human-induced activity (CO2 emissions) - is critically challenged by the author. The visual evidence of melting ice caps, together with Al Gore’s film, are discussed in detail and put into perspective. The book explains how the ’consensus’ of 2500 scientists claimed by the IPCC is reduced to about 50 who have formed themselves into a tight-knit group. Serious questions are asked about their lack of quality assessment of results and overall ethical behaviour.

This is a well researched book containing a lot of food for thought, not least the lack of scrutiny of scientific results, and will allow readers to form a rational view. Surprisingly, it is full of drama and skulduggery involving scientists and politicians.

The only quibble is that the author doesn’t make clear that consensus is not a scientific concept, but a political one.