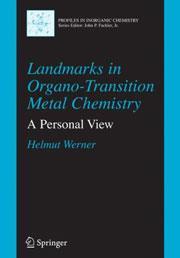 The 20th century was notable for the initiation and burgeoning of many scientific disciplines which then profoundly influenced everyday lives. However, even among the amazing advances elsewhere, the blossoming of organometallic chemistry has been spectacular.

Many striking synthetic discoveries were associated with the names of Geoffrey Wilkinson, Ernst Otto Fischer, Gordon Stone, Joe Chatt, Jack Lewis, and Mike Lappert, and we eagerly scanned each new issue of Chemical Communications and the Journal of the American Chemical Society to read about the latest extraordinary molecule that had been reported.

Helmut Werner has now published his scientific autobiography on a professional life that has been coincident with the development of organo-transition metal chemistry.

As Werner studied with Hein, who (albeit unknowingly) made the first arene sandwich complexes, then did his PhD with Fischer, and was a key actor in many advances, he is well-placed to comment.

In this book, liberally illustrated with photographs, including pictures of Wilkinson and Fischer in funny hats, he chronicles entertainingly the key events from the pioneering work of Grignard, Zeise and Frankland to the recent C-H and C-C bond activation discoveries by Bergman, Graham and Milstein.

This is not a dry textbook - though much of significance for teaching can be learnt from it. It focuses strongly on the historic development of the subject and on the people who made it happen. I particularly appreciated the nice pen-portraits of many of the dramatis personae; a similar construction was used by Akio Yamamoto in the intermezzi in his 1986 book on the same subject.

Organometallic chemistry is now sufficiently established that we can allow ourselves the luxury of looking back over its history, as it offers an interesting view of the development of a scientific discipline. I can warmly recommend it as ’a good read’ to students and teachers alike.