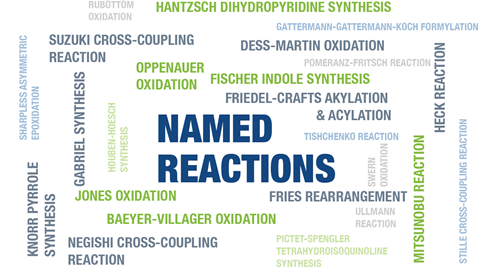 Discover the most important named reactions

Today, named chemical reactions play a crucial role in organic synthesis, which continues to grow in its ability to construct ever more complex and diverse chemical molecules.

The first named reaction in organic synthesis, the Lieben Haloform Reaction, had its origin in 1822 when Serullas found that iodine crystals dissolved in a mixture of alkali and ethanol yielded a yellow precipitate which he called ‘hydroiodide of carbon’, today we know this as iodoform (CHI3).

In 1870, A. Lieben studied the reaction of many carbonyl compounds with iodine and alkali, and postulated rules that formed the basis for the iodoform test. Before spectroscopic methods became widely available for structural identification, the iodoform test helped identify the structure of many organic molecules.

To this day, many new chemical reactions are being reported and named after their discoverers in recognition of their valuable contribution to synthetic organic chemistry.

Visit our reaction categories for details on the history, applications, and mechanisms of key named reactions, and don’t forget to vote for your favorite below:

Vote here for your favorite named reaction or to submit your details to be informed of future categories as they are added.