1
Introduction: the coronavirus pandemic and the future 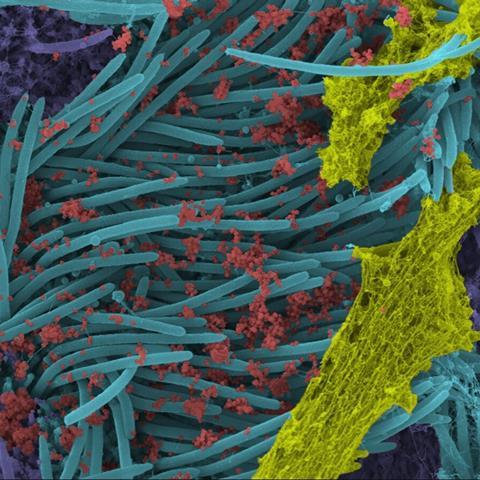 The coronavirus pandemic and the future

This series of Chemistry World reports is part of a forth coming e-book and hardback to be published by the Royal Society of Chemistry. The book was motivated by a desire on the part of the editors and the authors to produce a body of information on the new and deadly coronavirus about which the world was largely uninformed and for which it was totally unprepared.

Our hope and our goal in producing this book is that scientific knowledge will enable us to survive this pandemic and to be better prepared for future viral epidemics and pandemics. These articles are dedicated to those who lost their lives to COVID-19, and to the health care workers who valiantly tried to save them, as well as to the scientists who worked in the field to develop new test methods, pharmaceuticals, and vaccines.

Our perception is that few Western scientists or non-scientists took much note of the either the 2003 outbreak of Severe Acute Respiratory Syndrome coronavirus (SARS-CoV) in China, or the 2012 outbreak of Middle East Respiratory Syndrome coronavirus (MERS-CoV) in Saudi Arabia. Both viruses spread to about 30 countries, and each killed between 800 and 900 people - with mortality rates of 10% and 35%, respectively. By contrast, with a lower mortality rate, estimated at 3-5%, SARS-CoV-2 spread around the globe in just four months, and in less than eight months killed more than one million people, still counting. Those countries that immediately began lockdown, testing, and contact tracing were able to contain the virus; those that did not continue to experience large numbers of hospitalisations and deaths.

Here are the facts: The first case of SARS emerged in Guangdong Province, China, in November 2002. SARS-CoV was identified in 2003 and spread to 32 countries or regions, primarily in mainland China, but also Hong Kong, Taiwan, Singapore, Vietnam, and Canada. There were 8437 reported cases of SARS and 813 deaths reported to the World Health Organization (WHO). The first case of MERS was reported in 2012 in Saudi Arabia. Since then, 27 countries have reported cases, although 80% were in Saudi Arabia. From September 2012, until the end of November 2019 and now, WHO has been notified of 2494 confirmed cases of MERS and 858 deaths.

Transmission of SARS-CoV is person-to person through unprotected contact, while MERS is transmitted via dromedary camels or infected people (WHO 2019). Although there are gross similarities in the clinical spectra of SARS, MERS and COVID-19, the new viral disease is far more contagious and dangerous than its predecessors. In part because SARS and MERS were more deadly than COVID-19, they have all but disappeared. However, the morbidities suffered from COVID-19 infections are more pervasive and more persistent than in the case of SARS or MERS, and people afflicted with moderate to severe cases of COVID-19 are more likely to suffer chronic debilitation.

Like MERS-CoV, the clinical spectrum of SARS-CoV-2 infection ranges from no symptoms (asymptomatic) or mild respiratory symptoms to severe acute respiratory disease and death. A typical presentation of MERS involves fever, cough, and shortness of breath. Pneumonia is a common finding, but not always present. Gastrointestinal symptoms, including diarrhea, have also been reported. Both with MERS and COVID-19 severe illness can cause respiratory failure that requires mechanical ventilation and life support in an intensive care unit. Both viruses appear to cause more severe disease in older people, people with weakened immune systems, and those with chronic diseases such as renal disease, cancer, chronic lung disease, and diabetes.

Like SARS-CoV, transmission of SARS-CoV-2 is primarily from person to person. However, according to the World Health Organization (WHO 2020), SARS-CoV transmission appears to occur mainly during the second week of illness, which corresponds to the peak of virus excretion in respiratory secretions and stool, and when hospitalised patients with severe disease start to deteriorate clinically. Symptoms are readily apparent including fever, cough, and shortness of breath, which facilitate detection and hospitalisation. Many cases of human-to-human transmission of SARS-CoV have occurred in a health care setting in the absence of adequate infection control precautions.

Transmission of SARS-CoV-2 is altogether different in that pre-symptomatic or asymptomatic individuals can shed and transmit the virus within days of infection, and well before the onset of symptoms. In fact, viral infection, reproduction, and shedding occur entirely without symptoms in a large percentage of patients who test positive for SARS-CoV-2. This alteration in the pattern of disease transmission may relate to the acquisition of the furin cleavage site in the spike protein and/or increased binding affinity for ACE2 in the case of SARS-CoV-2 as compared with SARS-CoV.

COVID-19 can progress in severity from mild to moderate to severe, sometimes with a precipitous drop in oxygen saturation in severe cases such that mechanical ventilatory life support is required. This is can be because the virus is equipped to circumvent the immune system such that a cytokine storm, in which cells release massive quantities of small proteins called cytokines, results in extensive tissue damage with dysfunctional coagulation and multi-organ failure. Cytokine storm is a component of the respiratory diseases caused by SARS and MERS as well as by COVID-19 and is particularly detrimental to patients with comorbidities such as hypertension, diabetes, and cardiovascular disease.

The main threat of SARS-CoV-2 is its propensity to be spread by unknowing asymptomatic carriers in exhaled aerosols containing their respiratory droplets. In fact, this attribute presents the greatest challenge to effective public and global health management, since the virus can survive for hours as indoor aerosols and on non-porous surfaces. Social distancing, mask wearing, hand washing, and disinfection are effective tools in slowing the spread of the virus, but gatherings of large numbers of people are to be avoided until community spread is contained.

This series of twelve Chemistry World reports chronicles the outbreak of the novel coronavirus (SARS-CoV-2) beginning with the first known disease case in China on 1 December 2019 and describes what has been learned and practiced during the first six months after the declaration of the COVID-19 Pandemic on 11 March 2020. While the world awaits a safe and efficacious vaccine many efforts have been undertaken to find suitable pharmaceutical therapies and appropriate patient management interventions. Future articles will continue to document progress over the next six months and will include recommendations for the future.

More The coronavirus pandemic and the future