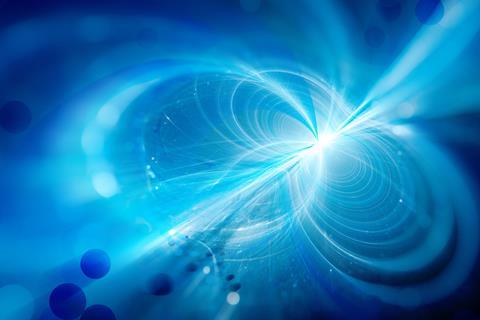 In 1995 Allen Bard, Fred McLafferty, George Whitesides and I were invited to assemble a collection of articles for Accounts of Chemical Research about the holy grails of chemistry. I welcomed this task because I believe that identifying holy grails inspires others to pursue promising pathways to advance the chemical sciences. This time I have been asked to put forward an aspiration of my own. I do so with pleasure but also with some trepidation because one person’s quest for a holy grail may be another person’s twisted journey to nowhere. However, my belief is that harnessing interfacial electric fields to control chemical reactions will advance chemistry rather than be a dead end.

Electrostatic interactions underlie all of chemistry. Beyond the complicated chemical equations and reaction schemes that are used to describe chemical reactions, it is the rearrangement of charges and their associated electric fields that govern chemical reactivity. This is the conceptual understanding from which we derive our electron-pushing mechanisms and rationalise how we go from starting materials to products. Given that the probability and mechanism by which a reactant species is transformed into product is so dependent on the nature of the associated electric fields, it is not surprising that modulating the electric field environment surrounding a reacting system can influence its outcome.

Indeed, the importance of electric fields in controlling chemistry has long been recognised.1 An example of this is how enzymes work. During the 1980s and 1990s Arieh Warshel of the University of Southern California in the US and co-workers presented arguments that electrostatic interactions were mainly responsible for enzymatic catalysis.2 This was beautifully demonstrated experimentally by the work of Steven Boxer and co-workers at Stanford University3, US, who used vibrational Stark spectroscopy to demonstrate a causal relationship between the strong electric field (~107V/cm) measured at the active pocket of the enzyme and the catalytic rate. Mark Spackman of the University of Western Australia and co-workers4 further substantiated this result in 2019. By performing high-resolution synchrotron and neutron charge density analysis on a host–guest system that models the substrate selectivity of enzymes, they observed measurable enhancement in the dipole moments associated with substrate molecules in the presence of a host.

One might ask if it is possible to apply an external electric field to a chemical reaction system to mimic how enzymes behave. The answer is certainly in the affirmative. Although the large field strengths associated with enzymatic catalysis cannot be generated by typical static field sources, scanning tunnelling microscope (STM) techniques allow for large, orienting electric fields (~107–108V/cm) to be generated in the small space between the STM tip and a substrate. Several studies using STM technology have demonstrated control over the rates of single-molecule reactions. For example, the rate of bridge formation for a Diels–Alder reaction has been shown to increase five-fold in the presence of the STM field compared to its absence, and STM has been used to catalyse the cis-to-trans isomerisation of cumulenes in solution. Control of dynamical processes has also been demonstrated using the electric field associated with an intense pulse of laser radiation, first in the gas phase and then, most recently, in the condensed phase.7

Much more can be learned from extending these studies to other systems, but the big question for me is whether this control of chemical reactivity by the application of an external electric field can be scaled to lead to preparative synthesis. This question remains unanswered; it constitutes my holy grail.

One possible way to achieve this goal might be to use the strong electric field associated with the formation of a double layer at an interface. This idea conjures the topic of electrochemistry, but double layers can also occur naturally at the boundary of two phases without the application of an external voltage source.8,9 To exploit this effect, one would seek to increase the surface area in contact between the two phases. This reasoning leads to the use of aqueous droplets, bubbles or films surrounded by oil or air. Already, the rates of reactions in water microdroplets have been shown to be dramatically accelerated compared with the rates of the same reactions in bulk water.10

According to legend, those who discover the Holy Grail will achieve immortality and enlightenment. Perhaps, by searching for this holy grail of chemistry, we will open a new type of preparative chemistry of practical and enduring importance.