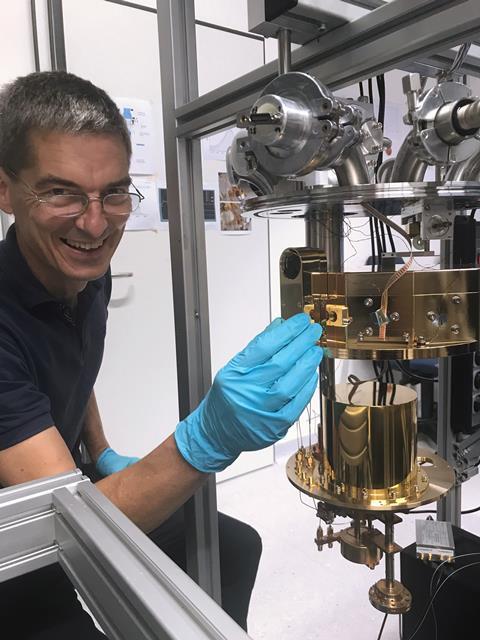 Dirk Schwarzer at the Max Planck Institute for Biophysical Chemistry, Goettingen, with the superconducting nanowire single photon detector that made the work possible

‘This is a completely new way to run a reaction that no one ever thought of before,’ says Alec Wodtke from the Max Planck Institute for Biophysical Chemistry in Germany about his team’s first-of-a-kind system that harvests vibrational energy from infrared light and uses it to perform an isomerisation. ‘We can put energy into a system in a way that’s going beyond what’s possible with simply thermal energy,’ Wodtke adds. One day, this could allow chemists to carry out reactions that are impossible to do by traditional synthesis.

In photosynthetic plants and bacteria, light-harvesting proteins concentrate visible light energy and funnel it to a reaction centre. This means organisms can capture more light than the reaction centre alone can. However, infrared light lacks the energy to create these excited electronic states – it can only manage to form lower energy vibrational states – so is of no use to plants. ‘What we’ve set up is an analogous to light-harvesting systems but for infrared, which is actually bizarre, because normally for light harvesting, you need excited electronic states,’ Wodtke explains. His team discovered that excited vibrational states can also be pooled and the energy transported to a reaction centre.

In the team’s setup, the reaction centre is a monolayer of ‘heavy’ carbon monoxide, containing carbon-13 and oxygen-18, sitting on a sodium chloride surface. The infrared-harvesting part of the experiment is a thick overlayer – up to 100 monolayers – of regular carbon monoxide. The entire experiment is kept at ultra-low temperature to immobilise the gaseous components.

‘When we pumped all the vibrational energy into the light isotope [using an infrared laser], it would efficiently transfer all that energy to the heavy isotope and we could actually use that to drive a reaction,’ says Wodtke. Compared with directly exciting the heavy isotope layer, its vibrational energy density was 30 times higher when using the infrared-harvesting overlayer.

The reaction in this case is simple: the carbon monoxide molecules, which start off being bound to the surface via the carbon atom, flip upside down. But Wodtke and his colleagues hope to use vibrational energy pooling to drive other processes, such as Diels–Alder reactions or even carbon dioxide activation.

‘[This is] a very selective way of driving a reaction under conditions far from thermal equilibrium – very high vibrational energy at very low temperature,’ says Rainer Beck who does quantum-state resolved reactivity measurements at the Swiss Federal Institute of Technology Lausanne. He stresses that the study also shows how important sensor technology is as it was only made possible by a new, ultra-sensitive detector that can pinpoint individual infrared photons.

Robert Field from the Massachusetts Institute of Technology in the US, where he investigate molecules’ structural and dynamical properties, is impressed. ‘This experiment is destined for elementary statistical mechanics textbooks.’

At first glance, the setup resembles Maxwell’s Demon, a thought experiment on how the second law of thermodynamics might be violated by decreasing a system’s entropy. ‘You normally don’t think of being able to control how a molecule attaches to a surface, thermodynamics decide what is the relative amounts of one isomer versus another,’ Field explains. Being able to influence this is like removing surface defects, lowering the surface’s entropy.

‘This has enormous practical significance,’ Field concludes. Because energy can be funnelled to near-surface defects in solids, an infrared antenna could be used to transiently remove impurities. ‘I think that there probably will be patents applied for by the Wodtke group to put it to uses that involve modifying surfaces in a constructive way.’