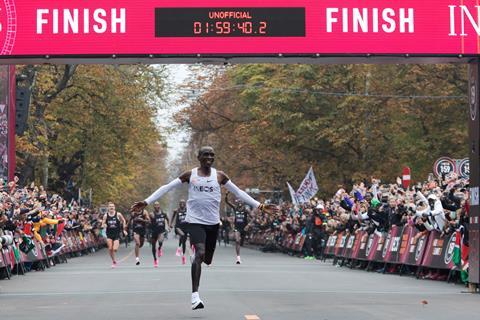 Eliud Kipchoge at the finish line

Kenya's Eliud Kipchoge (white jersey) celebrates as he crosses the finish line at the end of his attempt to bust the mythical two-hour barrier for the marathon on October 12 2019 in Vienna. - Kenya's Eliud Kipchoge on Saturday made history, busting the mythical two-hour barrier for the marathon on a specially prepared course in a huge Vienna park. With an unofficial time of 1hr 59min 40.2sec, the Olympic champion became the first ever to run a marathon in under two hours in the Prater park with the course readied to make it as even as possible.