Science taught in schools can seem wildly different to the research carried out in universities. While the first is based on facts, the second is an exploration of the unknown. The Inspire PGCE course attempts to bridge this gap, by bringing scientists with PhD or research experience into education.

‘The selling point is taking people with research backgrounds, who have a very deep understanding of science, to the classroom to teach [pupils] how to think about the process of science rather than to just give answers and tick boxes.’ says Naheed Alizadeh, formerly Inspire project director at Imperial College London, UK. 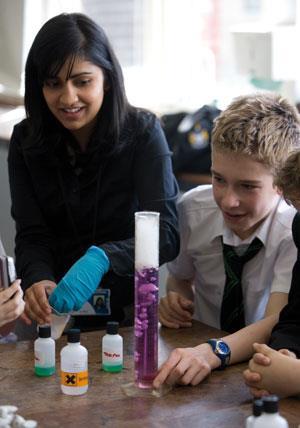 Inspire is open to graduates with a PhD or a research-based MSc degree in chemistry, physics or engineering. Taking scientists with research experience into schools connects both pupils and fellow teachers with cutting-edge science, says Alizadeh. ‘They also show the children that scientists are young people like them, and break that stereotypical image that students have of scientists.’

With a limit of 15 places every year, the course’s impact is small, but noticeable. Asma Qazi is one chemist who made the switch to teaching through the Inspire programme.  Qazi’s interest in teaching was fired during her PhD at Queen Mary University of London, UK, while participating in the now discontinued Researchers in Residence scheme. When she completed her PhD in December 2010, Qazi’s thoughts turned to her next career step. ‘I was thinking about academic posts, both teaching and research. Then I came across Inspire.’

Qazi started the following September. After a few weeks of intensive training at Imperial, she was given her first school placement at a mixed comprehensive in Chingford where she taught physics and general science classes. ‘I started off by taking on a year seven class, building my confidence, getting to know how to interact with the kids and finding my feet,’ she says.

As well as two school placements and PGCE training, Inspire students develop and deliver outreach activities during the nine-month course. These include Christmas lectures, activities during National Science and Engineering Week, and activities specific to their school such as running science clubs, giving careers advice or mentoring pupils.

These activities are a chance for scientists to bring their research into a classroom environment. ‘Given that I worked in catalysis during my PhD, I used that in Inspire talks,’ says Qazi. ‘I had a couple of demos on how catalysts make reactions go faster. Then we had a practical using the example of how people are lactose intolerant because they don’t have an enzyme called lactase produced by the body.’ Students are taken to a number of different schools to carry out Inspire activities. ‘Over the whole of the Inspire course I visited eight or nine different schools,’ says Qazi. ‘You have to develop yourself in adapting your style of teaching and really interact with the kids. I think that’s a real positive.’

It is this aspect that makes Inspire different, and potentially more challenging than other PGCE courses, says Alizadeh. ‘We teach [students] how to be very good science communicators as well as teachers.’

Employment rates for the course’s graduates are high; all of Qazi’s year secured teaching posts on completion of the course, if not before. ‘Coming from a research background you have that expertise and you can use that in the classroom and understand the subject a little bit better. Not only that, but things you learn when you’re doing a PhD are used in the classroom as well: skills like leadership and time management,’ Qazi says.

For Qazi, at least, Inspire was definitely the right choice and one she would recommend to others. ‘If you’re one of those people who likes the teaching side of research and you like working with other people then most definitely do the Inspire PGCE,’ she says.