As a teenager in a small Russian town, Andrei Khlobystov stood out for his desire to be a chemist. He is now making waves in the UK with his nano work, as he tells Yfke Hager

As a teenager in a small Russian town, Andrei Khlobystov stood out for his desire to be a chemist. He is now making waves in the UK with his nano work, as he tells Yfke Hager

When Andrei Khlobystov was 15, he decided that he wanted to be a chemist. In the small Russian town where he grew up, this was unusual. ’Everyone wanted to be a doctor or engineer,’ Khlobystov says, ’but I was fascinated by the idea that everything is made up of molecules.’ Fast-forward 16 years, and Khlobystov has certainly achieved his childhood ambitions: he is now a Royal Society fellow with a 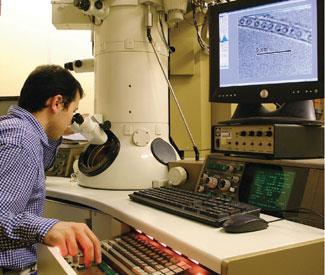 But the road to academic independence wasn’t always a smooth one; Khlobystov almost gave up during his first year at university. He applied to Moscow State University (MSU), which boasts the best chemistry department in Russia. Competition for undergraduate places is fierce. Khlobystov passed the entrance exams and was awarded a place, but soon started doubting his decision. ’The first year was quite miserable,’ Khlobystov recalls, ’I wasn’t expecting so much maths, and I nearly gave up.’ Encouraged by older students, Khlobystov persevered through five years of intense study. ’I didn’t lose sight of the bigger picture,’ he says, ’and now I can see that it laid a good foundation for topics like quantum mechanics.’

Chemistry in the UK

Towards the end of his fifth year, Khlobystov met Martin Schr?der, an inorganic chemist from the University of Nottingham, UK. Schr?der invited Khlobystov to Nottingham for a three month research project. In England, Khlobystov met the people who would shape his research career. Neil Champness, then a teaching fellow in inorganic chemistry, enthused Khlobystov with his discussions of exciting emerging research topics. ’Meeting enthusiastic mentors makes all the difference,’ Khlobystov says. After completing his PhD at Nottingham, he decided that he wanted to do something different. ’Up to this point, I had only done fundamental chemistry. Now I was driven by applications,’ he says.

Khlobystov’s research sparked media interest when he and his colleagues at the University of Oxford and the University of Nottingham developed the world’s smallest test tube, a feat that gained an entry in the Guinness Book of World Records. Khlobystov and his colleagues developed a technique to polymerise fullerene oxide molecules (buckyballs) in an orderly fashion, using a carbon nanotube as a miniature test tube to coerce the buckyballs into a line just one molecule thick. Khlobystov found it challenging to get journalists to appreciate the importance of this new technique. ’Luckily, it’s very visual work and it helps if you can show pictures,’ he says.

While Khlobystov enjoyed working at the interface between chemistry and materials science, he eventually turned back to chemistry. ’I’m a chemist at heart,’ he explains. In rapid succession, he received a Leverhulme Trust early career fellowship followed by a Royal Society university research fellowship.

1.2 million research grant from the European Science Foundation as part of the European Young Investigators awards scheme. ’I believe that I am the only chemist in Britain to hold this type of award,’ he says. ’Getting a grant like this makes a substantial difference.’ It has allowed him to set up his own lab at the University of Nottingham, which already houses six research students and two postdoctoral researchers working on carbon nanotube functionalisation for electronic applications, including sensors and transistors. ’We’re aiming for research that can be commercialised,’ Khlobystov says. It’s likely that this won’t be the last we hear of this promising young researcher.

Other
Holder of two patents