A Twitter presence can be a valuable career tool for researchers

Last July, US comedian Emo Philips commented on a Chemistry World tweet about a complex containing a triplet benzene dianon, joking to his followers, ‘this really hit home’. Pointing out the impenetrability of chemistry to the wider world may be low-hanging comedic fruit, but this represented one of the rare occasions when chemistry broke out of its Twitter silo. There is a large and flourishing community of chemists on Twitter and while many researchers still see social media as a waste of time, those who regularly engage say it provides both personal and career benefits.

‘Chemistry Twitter has evolved a lot over the last eight years,’ says atmospheric chemist Nadine Borduas-Dedekind (@nadineborduas). Now an assistant professor at the University of British Columbia, Canada, she joined Twitter as a student in 2014, when she says most chemists on Twitter quickly got to know each other. ‘I would say [its] a little less of a tight knit community now … a lot more people have come on board.’

‘Covid times and the inability to attend events in person have meant engagement online has become more important than ever,’ says Jason Woolford (@Doctor_Galactic), a chemistry editor at the Royal Society of Chemistry and the manager of #RealTimeChem – a popular community feed with over 18,000 followers. Woolford says Twitter is now the place to reach your peers, although it may still be hard to reach a broad audience. Visibility within your field is a major benefit agrees Borduas-Dedekind, who says being on Twitter has led to numerous career opportunities: ‘I probably can’t even appreciate the extent of where that visibility has taken me.’

Nessa Carson (@SuperScienceGrl) is another long-time tweeter. As an undergraduate she tweeted for advice on summer internships. ‘One of the responses was to invite me for a role that summer in a lab in the USA – I swiftly accepted!’ Now an automation chemist at Syngenta, Carson says she has been approached several times with job offers on Twitter: ‘Real ones, not just LinkedIn mass recruitment messages.’

Another active tweeter, postdoc Andryj Borys (@AndryjBorys), has also used Twitter to shape his career, identifying groups that he wanted to join, including his current position in the lab of Eva Hevia at the University of Bern in Switzerland (@EvaHeviaGroup). ‘[Twitter] was especially rewarding for me when I first launched my website since the retweets and likes gave it huge publicity that I wouldn’t have gotten through other means.’

‘Chemistry Twitter is also wonderful if you have a question or query – you’re almost guaranteed to get the answer,’ says Borys. For some, this goes beyond the practical, with the Twitter community providing emotional support. Borduas-Dedekind admits she found her first year of teaching hard and tweeted about her experiences. ‘[I got] this huge wave of support of 400 other people that went through the same thing, and you [feel] “I’m not alone”.’ Borys also found the Twitter community crucial for making new friends when he moved cities, and he adds, ‘I even met my partner through chemistry Twitter.’ 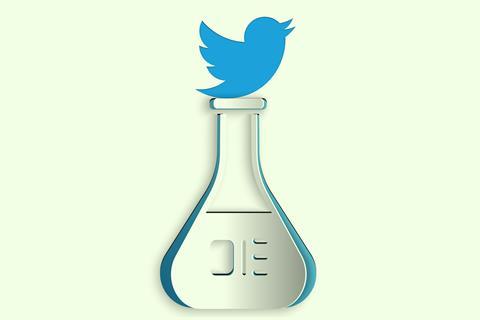 Experiments aren’t the only thing chemists talk about on Twitter

For those new to chemistry Twitter, the hashtags #chemtwitter and #RealTimeChem are a good place to start. RealTimeChem was started in 2012 at Imperial College London, UK, and taken on by Woolford who launched a RealTimeChem day to encourage all chemists to tweet about their work. ‘Since then, I’ve run RealTimeChem, or curated it, as I like to say, because it runs itself,’ says Woolford. His role now is mainly retweeting content that he thinks will interest the community. Another account many chemists follow is @Chemjobber, which provides links to jobs but also more light-hearted community banter and memes.

A more recent trend is the introduction of academic group Twitter accounts. ‘I’ve noticed a lot more over the last couple of years,’ says Woolford. ‘Tweeting about your research has become a big thing, there is a big audience out there.’ ‘They tend to be very dry,’ complains Lee Cronin (@leecronin) who has a well-followed personal account, as well as one for his digital chemistry group at the University of Glasgow, UK. He has been on Twitter for over a decade and says he uses it to provide context for his research and to ‘give people hints of what’s coming’, particularly where times to publication might not be as quick as he would hope.

Borduas-Dedekind says chemistry Twitter has become a little more political over the eight years she has been tweeting, with people now discussing departmental policies they don’t like, for example. ‘I don’t know how much of this is pandemic related either, but it’s become less light hearted,’ she feels. ‘It’s also been a lot more inclusive, and there’s been a lot more diverse voices, which is absolutely excellent,’ she adds. Twitter hashtags are being used for several campaigns to support and celebrate the achievements of chemists from more marginalised groups. For example, the BlackinChem movement uses Twitter to amplify Black voices, providing a platform to showcase members’ work, and to highlight people who are looking for postdocs.

The more engagements you make, the more positive feedback you’re going to get

Getting started and acquiring an audience for your tweets can be daunting. ‘There are several different ways people are approaching it,’ says science journalist and Twitter enthusiast Kit Chapman (@ChemistryKit). One is to start following other people, who may reciprocate and follow you. But that’s not the route Chapman took. His approach was to look for engaging content to post: ‘It could be interesting scientific facts, which is how I’ve gone.’ The third method is to join conversations and respond to people who engage with you. After all, says Cronin, ‘it’s a social media, the more engagements you make, the more positive feedback you’re going to get.’

Building up a presence takes some time commitment. ‘If you only tweet once every few months, it’s not how you are going to engage with the community, you have to be there regularly,’ says Borduas-Dedekind. Her feeling is that it’s worthwhile to make the time to use Twitter to build a community – in the same way as you would take time out of the lab to go to a conference. Now she has a more established presence and is at a different career stage she is less engaged. ‘Sometimes there are a few days that I go without checking it. And that’s okay, because when I decide that I have time to check it, it’s waiting.’

Another important decision is what sort of Twitter identity to adopt – do you want to exclusively discuss chemistry or reveal more about yourself? ‘I think you need to show your personality and show who you are and share a mix of chemistry and other personal things,’ says Woolford. Carson agrees: ‘I shift my balance regularly without thinking about it,’ but she notes, ‘whatever you talk about probably won’t benefit you unless it’s interesting’.

‘What I’m trying to do is make sure that my Twitter account is authentic,’ says Cronin. He advises others to be themselves and engage with topics they are interested in, but says it’s crucial to ‘maintain a professional approach at all times’. Borduas-Dedekind says the one thing she avoids is politics and recommends a separate account for chemists wanting to engage in political debates. She mainly sticks to work-related content but does occasionally post skiing photos, ‘because that’s a big part of who I am’.

Sticking to these guidelines should make engagements fruitful, but Woolford says users should bear in mind Twitter’s reputation for pile ons and ‘Twitter mobs’. ‘Within chemistry Twitter, things are generally positive, it’s what keeps me coming back … that is not to say that trouble has not occurred. There have been arguments.’ He points to some of the heated debates Cronin has been involved in regarding PhD student working hours, and also the abuse targeted at US-based scientific integrity consultant Elisabeth Bik, known for her work detecting photo manipulation in scientific publications.

Borys suggests becoming familiar with the mute and block functions if you do receive negative attention. One area he says that can cause a backlash is dangerous or sloppy experimental set ups: ‘People will readily criticise or comment on your setup or fumehood if you post a picture of it.’

‘The reality of trolling and abuse is especially strong for women and racial and sexual orientation minority groups,’ says Carson. ‘I have had some dangerous moments … but overall, I have had thousands of times more positive moments.’

The situation can be more perilous for those trying to engage a wider public audience with science. ‘I actually shut down [my] Twitter for almost a month,’ explains Chapman. An off-the-cuff remark related to the cleanliness of a city he was visiting set off an incredibly unpleasant pile on. ‘Any hot button topic, any political debates, even when you don’t consider it necessarily political yourself, can suddenly turn into a serious issue and you can find when you open up your phone at 9–10pm at night you’ve got a list of people telling you what a terrible human being you are.’

Chapman says the experience has made him more careful. Woolford cautions users ‘if in doubt don’t tweet it. Always be aware that Twitter is a public sphere.’ Cronin has also learnt lessons and is keen to refocus some of his interactions on Twitter. ‘I’m an incredibly optimistic person. I love doing science, I just want to make sure that comes across,’ he says. Though Chapman hopes there is still space for some light-hearted ribbing. ‘You can always wind up organic chemists by saying that RB Woodward is overrated. Just post that and I guarantee you’ll get 200 responses!’

While the research community mostly focuses on Twitter, other social media platforms also host chemists, particularly those whose interests are in chemistry education or public engagement. One well-established chemist on Instagram is Martina Hestericova, who is a forensic chemist and freelance science writer based in Basel, Switzerland. Her science outreach activities via the Instagram account science_exercises.eu reaches over 31,000 followers and include a series on bread science and coffee science.

The short video-focused platform TikTok has also emerged in the last few years, being particularly popular with younger viewers. ‘I don’t think it’s fully formed yet in terms of chemistry, but you do see a lot of science communicators,’ says Chapman. The platform seems well suited to short practical demonstrations, and videos from accounts such as nilered and chemteacherphil regularly receive several million views. Popular videos include some extreme stunts such as what creator nickuhas claims is ‘the world’s largest elephant toothpaste experiment’, which has a stunning 106.6 million likes.

How the chemistry research community will respond to new platforms remains to be seen. For now, a Twitter presence is becoming a critical tool for career development. ‘Sometimes, it’s also just fun,’ says Borduas-Dedekind.