The biggest paradox in science is that the better you are at something, the less time you get to spend doing it. PhD students spend years slaving in the lab, wondering if they’ll ever be free from the test tube (then start their thesis and instantly regret their naïvety). Postdocs begin to take on more paperwork, and yearn for the halcyon days of just getting on with stuff. And by the time you’re leading a group, all the practical stuff is often done by your team. That leaves you stuck in front of the computer, wondering what you’ve done to deserve the Kafkaesque nightmare thrust upon you. 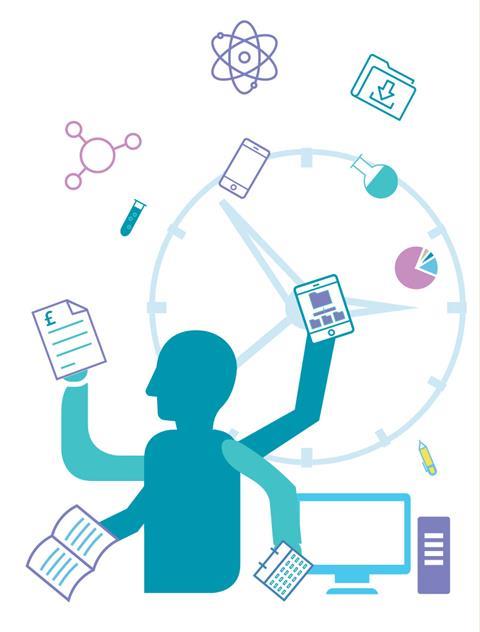 It’s not your imagination. According to Nature’s 2016 jobs survey, the average researcher spends only 38% of their time on research. This is higher in those aged under 35 (over 50% spent actually getting on with the job), while those aged 45 or older said that research comprised less than 30% of their daily routine. Instead of experiments, the bulk of a researcher’s working life is made up of writing papers (16%), grant applications (10%) or general admin and data storage (16%). The final 20% is spent teaching.

It’s getting worse, too. Most respondents said this had increased in the past five years. The cause (to the surprise of no one) is likely to be competition for funding – a problem that over 50% of researchers told Nature was the biggest challenge to their career progression.

Clearly, something is going wrong when a researcher spends more time filling out forms than actually doing research. No one goes into a career in science dreaming about all those different ways to get a project rubber-stamped, or how to dance around the dreaded comments from ‘peer reviewer 3’. But – pernicious competition for ever-decreasing funds aside – the unglamourous side of science could have its benefits.

In his autobiography (Surely you’re joking, Mr Feynman, if you’re looking for an excellent stocking filler), physicist Richard Feynman describes being offered a position free from any responsibility other than research with none of that pesky administration work. Feynman was smart enough to refuse, realising that he needed his ideas to be challenged. Answering student questions, explaining his theories, justifying his research goals – the basic graft of science – kept him fresh. Last month, chemistry’s latest Nobel laureate Ben Feringa said he was told of the award while discussing a problem with students (Chemistry World, November 2016, p2). Feringa accepted the award then called his students back in. Lab work matters, but passing knowledge on is just as vital.

Only spending 40% of your time on research may seem too little, but it might be the other 60%, away from the lab, that’s the secret of your success.