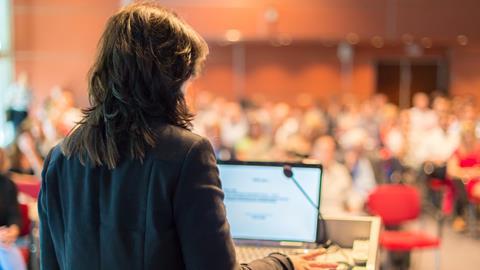 How to give a scientific presentation

Whether lecturing, presenting results at a conference or applying for a research proposal, giving presentations are a way of life for any chemist. But what are the best ways to get your point across while keeping your audience interested? 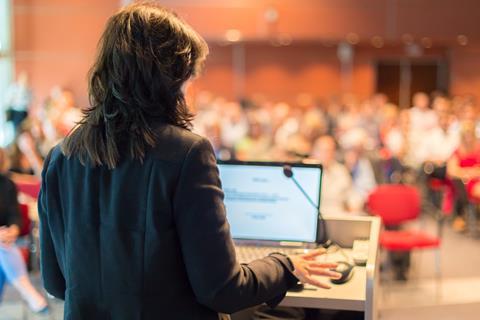 Jacquie Robson, is an associate professor of teaching at Durham University, UK, while Paul Bader is creative director at Screenhouse, an organisation which regularly trains scientists on how to develop better presentation skills. Here are their top tips.

Think about your audience

Whether presenting to colleagues or the general public, remember not everyone in your audience will be specialists. A common mistake scientists make is to assume others know as much as them when – more often than not – they are the expert in the room.

Even if your audience is well versed in the topic – for example, if you are presenting to a funding committee – do not start off with complex details. ‘If one person on the panel is outside the field, then you’ve lost them at the beginning,’ says Bader. Remember to give the big picture: it’s a good way in and a great way to make an impact.

‘Stories are easy to listen to and easy to tell,’ says Bader, who believes one of the most common mistakes is to cram too much information into just one talk. Structuring your talk in this way will help you to be selective.

Robson and Bader advise against learning a script by rote or reading a sheet of prose aloud. Written text is often more formal than convoluted than speech and sounds unnatural. Instead, have a set of key points on cue cards or use your slides as aide-mémoires. With a strong narrative, one point will lead to the next, making your talk more logical to follow and simpler to remember.

While PowerPoint is almost a given in today’s scientific presentations, try not to rely on it too much. ‘Slides should be clear, uncluttered and readable,’ says Robson. ‘Use diagrams rather than text.’

Slides should be used to highlight key points, not replicate your talk in written form. And remember never to turn your back on the audience – otherwise will be giving your presentation to the screen instead.

‘Think about how you present yourself,’ says Robson. Have an open stance, smile, maintain eye contact, speak to the back of the room and at a good volume. ‘If you act confidently, they won’t know you’re feeling nervous.’

One of Robson’s pet peeves is a speaker who distracts the audience, for example by chewing gum or overusing laser pointers. Try to identify any habits you have while speaking that might take your audience’s attention away from your talk.

If you are feeling anxious, Robson advises against holding pieces of paper, which might shake in your hands. Bader suggests taking a moment to breathe. And both say the best technique is to ignore your nerves. The audience doesn’t want you to fail, and often won’t notice slip-ups. If you do make a big mistake, just correct yourself and carry on.

Perhaps the most important tip is to go through your presentation out loud before delivering it on the day.

‘People spend a lot of time writing their presentation or working on their slides but often the first time in public is the first time [they] do it,’ says Bader. By practising in advance and timing your run-throughs, you can discover if your talk is too long or too complicated.

There are many ways to practice, and it’s important to find the technique that works for you: you could video yourself on a phone and play it back, speak to yourself in front of a mirror or get somebody to listen to a rehearsal. According to Bader, the best way is to deliver your talk to a colleague or friend as you can see which parts they are engaged with (or not). ‘[But] any of the above is better than doing nothing,’ he adds.

And what about the dreaded questions at the end? ‘You can’t prepare for questions, so don’t fret,’ says Robson. ‘It’s not a spot exam, it’s a discussion. Make it into a conversation and don’t be afraid of saying “I don’t know the answer”.’