Managing change: Reasons to be cheerful

Getting the economy back on track calls for innovation, and that calls for a mobile job market, says Bea Perks

Getting the economy back on track calls for innovation, and that calls for a mobile job market, says Bea Perks

2011 is well under way, the UK has just come out of recession, and belts are being tightened around the world. So what sort of career prospects can chemists look forward to?

The truth is that there are some great opportunities to be taken, but they are not always easy to find. And, understandably, the fear of leaping into the unknown is holding back some of the very best candidates. Nevertheless, a surprising number of employers are crying out for the specialist skills that many readers of Chemistry World  are likely to have.

It’s a recruiter’s market, says Charlotte Ashley-Roberts, the RSC’s careers advisor. The number of candidates is growing in light of a sadly inevitable swathe of redundancies. But it’s also a conservative market. ’People are hesitant to move jobs,’ says Ashley-Roberts. There is an air of pessimism in the shadow of a depressed economy and the move of several companies and/or company divisions overseas. ’It’s a fairly slow market right now,’ she says. 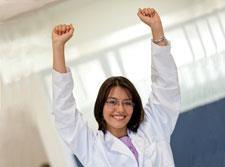 But it’s certainly not all bad news. ’There are some particularly exciting opportunities for chemists among the steadily increasing number of smaller, innovative start up companies,’ says Ashley-Roberts.

The importance of such companies is highlighted in the government report Technology and innovation futures: UK growth opportunities for the 2020s, which was released at the end of last year.

The report concluded that, if businesses could harness scientific and industrial capabilities to take advantage of technology developments, there were strong opportunities for growth in the UK economy through the 2020s.

The problem for innovative start up companies, which are well placed to drive forward these developments, is that it is not easy to find the specialist support they need.

’The problem at the moment is that people don’t know where to look,’ says Ashley-Roberts. A buoyant economy needs the support of technological innovation, but finding innovators isn’t as straightforward as you’d hope. Innovative chemists are tending to stay where they are.

Recognising the need for a forum where employers can find candidates with exactly the scientific and technological expertise required, and where potential employees can learn about the options available, the RSC is launching a state-of-the-art online careers resource (www.chemistrywordjobs.com).

Last year, the RSC and the Engineering and physical sciences research council (EPSRC) released the results of a report they had commissioned reviewing the economic benefits of chemistry research to the UK. According to the report, one in every five pounds in the UK economy is dependent on developments in chemistry research.

Industries reliant on chemistry contributed an astonishing ?258 billion to the UK economy in 2007 - equivalent to 21 per cent of UK GDP - and supported six million jobs, accounting for at least 15 per cent of the UK’s exported goods and attracting significant inward investment.

The report, by leading economic forecasting consultancy Oxford Economics, evaluated the contribution of chemistry research to many different industries and found that fifteen key sectors, including health, electronics, textiles and aerospace, are wholly or partly reliant on the chemical sciences.

The upstream chemistry industry - involving the manufacture of chemicals and chemical products - from dyes, pigments and fertilisers to plastics, detergents, paints and pharmaceuticals - contributed ?17 billion directly to UK GDP in 2007 with a turnover of ?63 billion. Global players in the sector include such luminaries as BASF, Syngenta and Unilever, but there are also about 3500 small and medium sized companies in the UK with fewer than 200 employees. The upstream industry employs approximately 205 000 workers.

’We have developed the all new Chemistry World  Jobs site for 2011 to facilitate interaction between what is clearly a vast pool of potential employers and what we know is a rich seam of highly qualified and experienced chemists,’ says David Mallinder, senior sales executive, recruitment, for the RSC.