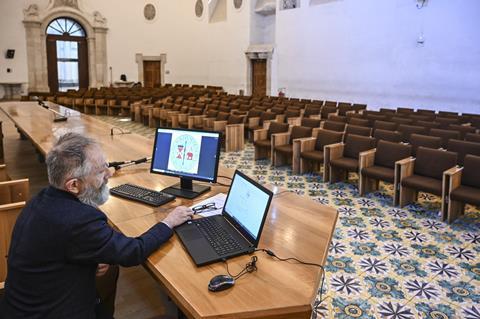 Lecturing to an empty room: dystopian sci-fi had nothing on this

As a child, I was excited to think that I would be alive in the impossibly futuristic year of 2020. It would be a world of virtual reality, holograms and Star Trek-style replicators, where there’d never be any need to leave the house. What bliss.

Since then, I’ve increased my appreciation for the outdoors and been mildly disappointed by how long it takes to develop sci-fi technologies. Yet I was accidentally right about one thing: 2020 is the year of virtualisation. Despite the challenges brought by the pandemic, scientists continue to share their research through virtual conferences, PhDs are being awarded through virtual vivas, and the business of education continues in a variety of virtual classrooms.

As with anything new, the move to a virtual world brought challenges – particularly since this change happened so suddenly for so many. But there are also many advantages to scientific life online, and a big one is improved accessibility. Events can draw a more diverse and global audience when participants don’t face travel costs and visa restrictions, and recorded lectures allow students to digest material at their own pace.

That’s not to say online events are automatically more accessible than in-person events. The advertised global reach of online resources only actually reaches parts of the globe that are fortunate (or wealthy) enough to have a good, stable internet connection. Timezones are always going to limit who can turn up to a live event. And for those who rely on assistive technologies, online content can be frustratingly impenetrable; earlier this year an evaluation of one million websites found that over 98% of homepages contain at least one element that doesn’t meet web accessibility standards. We need to be wary of congratulating ourselves for our inclusivity, while in reality leaving certain groups further behind.

And not everyone wins in a virtual world. Lecture videos have long been a source of contention between universities and unions, as lecturers balance giving the best possible educational experience with fears of being made redundant by their own recordings. With many universities facing financial instability as recession looms, the people who’ve made online teaching such a success shouldn’t be seen merely as costs to be cut.

More of the world’s lockdowns are starting to lift, but it looks like parts of the virtual world will remain with us long-term: for instance, the University of Cambridge, UK, has announced that lectures will remain online throughout the next academic year. How this will be implemented – and whether other universities will follow suit – remains to be seen. But perhaps it’s an opportunity to build on the best parts of our online experiences to support everyone who wants to be part of the scientific world. That’s a future worth being excited about.