Michael Braungart - an environmentalist, chemist, and businessman - is determined to use science to remove waste from industry, as Ned Stafford finds out

Michael Braungart - an environmentalist, chemist, and businessman - is determined to use science to remove waste from industry, as Ned Stafford finds out 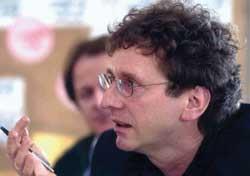 It is not easy finding an open slot to chat with chemist Michael Braungart. His secretary in Hamburg, Germany, scans his calendar. ’He’ll be back from the US on Monday,’ she says. ’You can call him at 9 am. He’ll be in his car driving to the Netherlands.’

Sure enough, Braungart is buzzing down the Autobahn when he answers his phone. ’I do not have much time,’ he warns. That is not surprising. Braungart, 51, who in the 1980s built Greenpeace International’s chemistry section, carries several business cards. Now on leave from the University of L?neburg, Germany, he has a business chair at Erasmus University in Rotterdam, the Netherlands, where he teaches and carries out research. He is founder/manager of two eco companies (one in Hamburg and one in the US) as well as scientific manager of the Hamburg Environmental Institute, a non-profit research centre.

When asked whether he is now maybe more of a businessman than a chemist, he replies: ’No. I am a scientist. And I think I am one of the best scientists in my field.’

’I only studied chemistry for one reason,’ he says. ’To learn about environmental issues caused by chemistry and how to solve them.’

At Greenpeace, his goal was to rally public support for environmental causes and make life difficult for corporations believed to be poisoning the earth. He recalls once getting beaten up by factory workers. When asked whether it’s true that he once lived in a tree for the cause, he says: ’There are a lot of tree stories but I don’t want to focus on them.’

During his Greenpeace years, he was always amazed at how primitive chemistry was. ’Nobody was looking at what things are made out of and where things are going to after usage. This was just stupid chemistry.’ In the late 1980s, Braungart began exploring a more collaborative strategy to promote the environment. In 1987 he left Greenpeace and founded the Environmental Protection Encouragement Agency (EPEA), a consulting firm that works with clients to develop processes, products and services that do not create waste.

By the early 1990s, his marriage to Monika Griefahn, also a former Greenpeace board member, began to pose potential conflict-of-interest problems with his business. She had become politically involved and in 1990 was named Environmental Minister of the State of Lower Saxony. So Braungart sought opportunities outside Germany by opening an EPEA office in New York, US. There he met William McDonough, a champion of environmental issues and also dean of the School of Architecture at the University of Virginia in Charlottesville. The two men clicked intellectually and in 1995 founded McDonough Braungart Design Chemistry (MBDC).

The guiding force behind MBDC is ’cradle to cradle design,’ a concept for designing and developing products ’based on patterns found in nature, eliminating the concept of waste entirely’. Braungart says: ’It is not intelligent [for humans] to make waste. No other species makes waste.’ In 2002, the two published a book titled: Cradle to cradle: remaking the way we make things  .

Both of Braungart’s businesses are successful, with MBDC boasting clients such as BASF, British Petroleum, and the US Air Force. With his wife often in Berlin as a member of the Bundestag, he says he spends more time in airports than at home. But he insists he has not sold out his environmental principles. He is still angry at carcinogens in toys and he continues to teach. ’The whole world will become a graveyard if we don’t change the way we do things,’ he says. ’I want to make sure we have the right scientists.’

He has no time for hobbies, saying his varied business interests keep him relaxed. ’After doing business, I find it relaxing to teach.’

As he drives to the Netherlands to discuss business plans to turn the 2012 Floriade international flower and garden exhibition into a ’cradle-to-cradle’ event, another call comes in. One more quick question: how long can he keep up this fast pace? ’I think the next 20 years,’ he says. ’I have to go. Bye.’ Click. 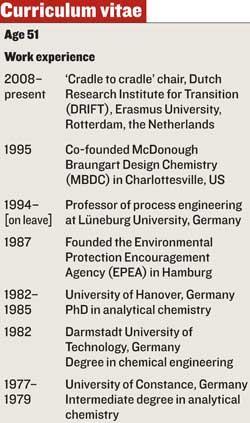