Justin Gooding balances his own drive to succeed with the desire to nurture his team, while working to develop new and better biosensors, writes Karen Harries-Rees 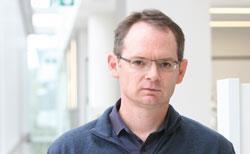 Justin Gooding leads the Biosensor and Biodevices Research Group at the University of New South Wales, Australia. He develops biosensors with applications in environmental monitoring and biomedical diagnostics, specialising in nanostructuring surfaces to get unique functionality.

He hopes his work will lead to biosensors that allow more personalised medical treatment, and is developing cell chips to answer questions about how bulk tissue responses to drugs relate to single cell responses. He is also interested in making sensors that can detect analytes in bodily fluids at very low concentrations and could, for example, be used in early cancer diagnosis. Another goal is to make electrodes and other surfaces that don’t foul so much in biological environments.

Gooding uses self-assembled monolayers, nanomaterials and polymers to modify biosensor surfaces. ’We make the surface selective for a particular analyte or enable it to interact with a biological system in a highly defined manner,’ he says. The general theme is to have a high degree of control over how we modify that surface and exploit that control to give us new types of information.’

Gooding’s group is recognised internationally for the work they did on the interface of carbon nanotubes and protein. And in 2009, Gooding’s recognition in the scientific community got another boost when he won the Eureka prize for scientific research - Australia’s premier science award.

He was ’absolutely stunned’ by his win and by the scale of the event. ’It blew me away how much hype and excitement there was for science,’ he says. He is keen to credit his team for their input. ’It might be a prize given to me but it’s really a prize for the work the group has done. It gave everybody a sense of pride.’

His pride in his team’s work is evident and his desire to help his colleagues succeed is key to what motivates him. ’PhD students and postdocs that join your group are vulnerable. If you don’t create the right environment for them and work hard for them then they won’t be successful and that’s going to affect their lives. My obligation to the people in the group is one of the things that really drives me to work hard,’ he says. 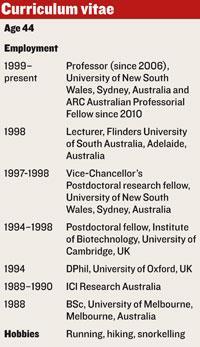 He also acknowledges the help he’s received from his own supervisors during his career. ’I’ve taken something from all the major people I’ve worked with,’ he says.

Gooding’s career choices have largely been about keeping his options open. He went to university planning to become a palaeontologist but quickly discovered that he preferred chemistry and by the end of his degree had settled on surface chemistry. This interest led him to work in explosives research for ICI in Australia. But after 18 months he decided he wanted to travel and do a PhD, so he moved to the UK to do his PhD at the University of Oxford.

From Oxford he went to the University of Cambridge to refocus his interest on surface chemistry and couple it with biology. ’It allowed me to bring surface chemistry into the biosensor field but also take my first baby steps into biology, so it was the perfect position for me,’ he says.

His move back to Australia was a hard decision. ’It has proved to be a good decision but I’m sure it would also have been a good decision if I’d chosen to stay in UK. I’ve learnt that it doesn’t matter which option you choose as long as whichever road you take you attack it with gusto.’

Karen Harries-Rees is a science writer based in Melbourne, Australia