British chemist Steve Woodhead's career in fragment-based drug discovery has taken him on a fast-paced 6000 mile trip from the UK to the US, reports Yfke Hager 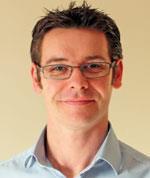 Steve Woodhead has forged a career in drug hunting on both sides of the pond. Specialising in fragment-based drug discovery, he recently navigated his career across the Atlantic, moving from a biotechnology company in the UK to a leading biopharmaceutical company in the US.

A secondary school chemistry award first motivated Woodhead to pursue science as a career. ’I had a flair for science from an early age,’ he recalls, ’but it was the efforts of a very enthusiastic science teacher that caused me to gravitate towards chemistry.’ During his undergraduate degree at the University of Sheffield, UK, Woodhead found himself inclined towards organic chemistry. ’It presented more opportunity for creativity, and the links with biology and medicine appealed to me.’

A final year research project with Charles Stirling, professor in the chemistry department at Sheffield, encouraged Woodhead to consider prolonging his academic career, but the younger breed of scientists teaching the final year courses at Sheffield also proved instrumental in his decision to embark on a PhD. ’Alan Spivey had just been recruited to Sheffield and was kick-starting his career, and I was his first PhD student,’ he says. Under the tutelage of Spivey, Woodhead made his first forays into organic synthesis.
His research focused on a series of naturally occurring sesquiterpenoids, which are found in plants in Ethiopia
and China.

Believing that a postdoctoral position abroad would enhance his job prospects, Woodhead sought research opportunities outside the UK after completing his PhD. ’I wanted to augment my knowledge and get a foothold in industry,’ he says. Joining Robert Holton’s group at Florida State University, US, he gained his first real insights into medicinal chemistry through the group’s work toward the design and synthesis of second-generation analogues of paclitaxel, a chemotherapy drug derived from the Pacific yew tree. ’My learning curve was exponential during my postdoctoral research,’ says Woodhead, in part fuelled by the fast-paced environment of a US lab. ’It was a demanding but ultimately very rewarding experience.’

At this point in his career, Woodhead already knew that he wanted to work in the pharmaceutical industry, but decided that additional postdoctoral experience would serve as a good springboard. After receiving an offer from Gerry Pattenden, he moved to the University of Nottingham, UK, where he gained experience managing other scientists. ’I was now in a good position to confidently mentor PhD students, and very much enjoyed that part of my role at Nottingham.’

In 2001, he decided to take the plunge. He applied for a position at Astex Therapeutics, an emerging biotechnology company based in Cambridge, UK, which was looking to expand into chemistry. Joining as a research associate, Woodhead was tasked with helping establish the company’s discovery chemistry platform. ’I was drawn to the focused approach of a smaller company,’ he says. It turned out to be a good move; Astex became one of the pioneers of fragment-based drug discovery. While at Astex, Woodhead led the protein kinase B drug discovery project that delivered the drug candidate AT13148. In 2009, he was highly commended in the RSC’s Young Industrialist of the Year award for his contribution to the project, which was a collaboration between Astex, Cancer Research Technology, the Institute of Cancer Research and AstraZeneca.

After eight years at Astex, Woodhead was motivated to broaden his horizons again. Across the Atlantic, Eli Lilly and Company was recruiting new experts to expand its fragment-based discovery team. ’Here was an opportunity to challenge myself and experience working for a major biopharmaceutical company. Moving abroad also appealed to my family. All of the components just fell into place,’ he says. His new workplace, the Lilly Biotechnology Center - San Diego, houses nearly 200 scientists. ’We have all the tools under one roof for collaborative fragment research. The facility maintains a biotech feel, but under the umbrella of a large biopharma corporation,’ says Woodhead. He looks forward to making new discoveries and collaborating with Lilly chemists around the globe, one of the benefits of working for a large international corporation. ’I’ve ended up 6000 miles from where I started,’ he says, ’it’s certainly been an interesting journey so far.’ 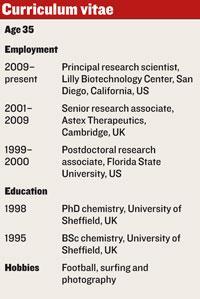