Ned Stafford visits a German research centre focused on using high pressure to develop materials which are harder, but cheaper, than diamonds

Ned Stafford visits a German research centre focused on using high pressure to develop materials which are harder, but cheaper, than diamonds

What do you get when you combine eight scientists specialising in chemistry, physics, materials, mineralogy, geo-engineering, and drilling technology, plus a dozen students and lab technicians?

You get, of course, a research centre that focuses on using high pressure to develop extremely hard materials, while training doctoral students in the field. To this end, the Technical University Mining Academy in Freiberg, near Dresden, Germany has founded the Freiberg High-Pressure Research Centre (FHP). 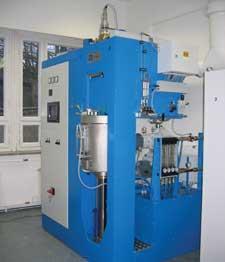 Jens Kortus, a theoretical physicist who is coordinator of the FHP, says the primary goal of the centre is to synthesise extremely hard materials at a much lower cost than industrial diamonds. The materials should also be much more resistant to corrosion and high temperatures than diamonds.

The impetus for the FHP centre came in 2006, when businessman and real estate magnate Peter Kr?ger bequeathed assets worth millions of euros to the Technical University via a foundation named after his father, Erich Kr?ger, who had worked at the university.

Kortus says part of the donation was to be used to create a new interdisciplinary center that would focus on research of ’strategic importance’ that could be applied in the commercial world. In 2007, the Technical University invited ideas from its researchers. Edwin Kroke, an inorganic chemist at the university, was an early proponent of a high-pressure centre: ’He was a driving force behind it,’ says Kortus.

Kroke was already interested in hard materials. In 1999 his work describing the synthesis of a third polymorph of silicon nitride was published in Nature  .

The Technical University already had the expertise and some of the infrastructure necessary for the new centre, including a mine and facilities for explosives experiments. ’It really is a perfect place to do high pressure research,’ says Kroke.

Eight professors at the university banded together to develop a plan to submit to the university. In addition to Kortus and Kroke, there were three materials scientists; one from mineralogy, one from geosciences, and one from drilling and mining. Fourteen applications were submitted.

600 000 (?534 000) on 1 October 2007, the first of five annual grants. An additional €400 000 in annual funding comes from other sources. ’This is kind of a start-up fund,’ says physicist Kortus. The centre mostly operates from existing structures, but new equipment has been purchased, including a spark plasma sintering device and a multi-anvil press. The FHP will be evaluated at the end of five years, when it could receive another half-decade of funding, he says.

The eight FHP professors have remained members of their respective faculties, including carrying their former workloads. Chemist Kroke admits the combined load is heavy, but says: ’We [professors] are able to do it because we have excellent workers, an excellent group of students.’

Kroke notes that Europe is already home to some well known high-pressure research centres, such as the Centre for Science at Extreme Conditions in Edinburgh, UK. ’There are labs around focusing on different high-pressure issues,’ he says. ’At FHP, we are focusing our efforts on an interdisciplinary approach with a lot of engineers to develop novel hard materials for drilling, cutting, machinery, etc.’

The interdisciplinary approach will be beneficial, he says, noting that engineers and commercial users are not always as interested in a fundamental understanding of materials properties as are chemists or physicists. ’They are primarily interested in product improvements and proper problem solutions,’ says Kroke. ’As an inorganic chemist, I think in terms of syntheses, chemical composition and structures on different length scales, and their correlation with product properties such as hardness, density, toughness and thermal stability.’

The FHP currently has nine doctoral students, one post-doc and two lab technicians. Each doctoral student is assigned to one of the eight professors, who leads a designated research area. The students are enrolled in one of the main university departments, which would issue the degree, but they would all be certified as high-pressure material specialists.

Kroke needs an additional PhD student, and says he is open to English-speaking candidates. And there is the possibility of a second position. ’The best candidate for me would be an inorganic chemist with experience in synthesis and handling of air-sensitive compounds and interest in materials science, or a materials scientist who is fascinated by the chemical precursor approach to high pressure phases,’ he says.

Ned Stafford is a freelance writer based in Hamburg, Germany