Originally from Italy, Daniele Leonarduzzi moved to the UK after graduating from the University of Padova with a master’s in chemistry. One PhD and a job later, he now finds himself at Velocys, a company developing gas-to-liquids (GTL) technology, where he has discovered that bigger is not always better. 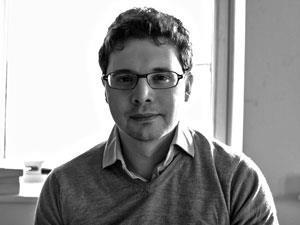 ‘The main R&D efforts at Velocys are in Fischer–Tropsch applications,’ says Leonarduzzi. ‘In particular, we focus on a sort of compact technology that can transform methane into diesel, and fine chemicals such as lubricants, at smaller scales than are possible using conventional GTL technology.’ Leonarduzzi has been a researcher at Velocys since 2012 – when the company was still known as Oxford Catalysts – and researches and develops the catalytic part of its technology.

Although Velocys has sites in Houston and Ohio in the US and at Milton Park near Oxford in the UK, it is a small company with only 100 employees in total. 20 staff work alongside Leonarduzzi at the Milton Park site, 12 of whom are dedicated to R&D. For Leonarduzzi, the team’s small size is a great advantage.

‘Everyone has to do a bit of everything and this is the exciting part,’ says Leonarduzzi. ‘We don’t focus on only one particular aspect; we really have a broad range of things we need to do.’ For example, Leonarduzzi may start with a preparation in the lab before working with potential manufacturers to help scale up the process. His job also involves identifying possible characterisation techniques, both those that can be used for lab-scale analysis and for quality control methods during manufacture.

It’s all a far cry from Leonarduzzi’s previous employer, Johnson Matthey, where he carried out his PhD in collaboration with the University of Oxford. Here, he studied nanoparticles for catalytic purposes, and it was this experience that encouraged him to pursue a career in industry.

‘I was lucky to see both [industry and academia] at the same time,’ says Leonarduzzi. ‘Before doing my PhD I probably thought I would follow an academic career but then when I entered industry, I liked the idea of seeing a profit at the end of the process.’ 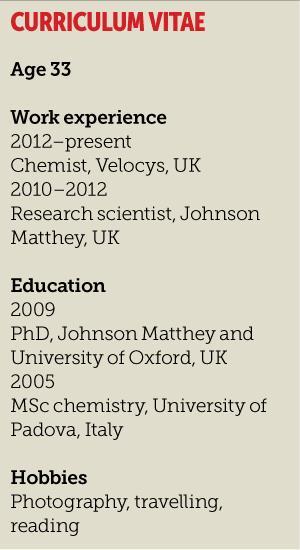 Post-PhD, Leonarduzzi stayed on at Johnson Matthey, taking on a variety of roles that included working on a large EU project and organising an open day for his department. He also found himself working as a consultant for a company developing oil tagging devices, where he provided chemical expertise to a team with a mainly physics background. ‘It was very interesting because I ended up working with people that had very different knowledge to me.’

Although Leonarduzzi enjoyed his time at Johnson Matthey, he wanted to move somewhere where his work would have more impact. Indeed, this is what he finds most attractive about his current role at Velocys: ‘It’s the idea that you can really, in each aspect, in catalyst preparation and production, have an impact,’ he explains. ‘That’s probably the most exciting part.’

The smaller size of the business also brings with it a slightly different mentality. ‘We are extremely focused on products, because we are not as large an organisation as Johnson Matthey,’ he says. That means making efficient use of resources is a priority for Leonarduzzi and his colleagues.

As an early-career chemist, Leonarduzzi is aware that he may need to focus on a particular expertise further on in the future. ‘At some point I think I’ll need to specialise, become an expert at something. But the world is changing very fast and I think you need to keep a good baseline while always look for opportunities and challenges.’ For the moment, he’s enjoying being in a small company and being exposed to the broad range of experiences that entails.