To detect and defend 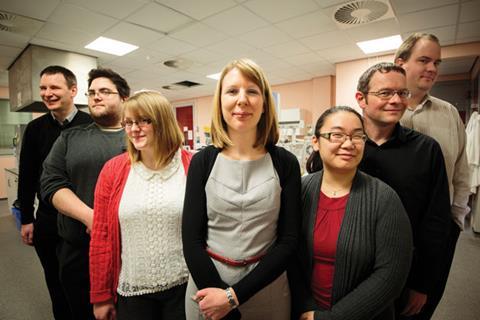 One glance at Rebecca Hopkins’ lab tells you that she is a physical chemist: every inch of bench space groans under squat blocks of instrumentation and computer hardware. It’s also clear she has a dedicated team – they bustle about the narrow walkways, tending to their experiments and harvesting data. But a glimpse of that data might reveal something more unusual. The techniques her team are developing are designed to detect chemicals that would not be found in many laboratories: chemical warfare agents.

Hopkins works for the UK’s Defence Science and Technology Laboratory (DSTL) at Porton Down, where scientists and engineers provide the UK’s military with their expertise.

Hopkins’ particular speciality is spectroscopy, which began with her PhD at the University of Bristol, working with Jonathan Reid to develop techniques to characterise aerosols. ‘We were using light to trap individual aerosol droplets and then manipulate them. For example, looking at the uptake of gases or bringing them together to the point of coagulation,’ she explains.

A two-year postdoc in the US at Lawrence Berkeley National Lab in California followed, which gave Hopkins a taste of field work. ‘I didn’t hesitate to take that opportunity,’ she recalls. ‘One of my greatest memories is of a field campaign we did in Mexico City. We spent a month sat on the roof of a building in the smog and the baking heat, collecting aerosol particles.’

Hopkins’ measurements enabled climate scientists to produce better-informed atmospheric models. ‘That’s why I really enjoy doing science,’ she smiles, ‘to create new knowledge and put that into the public domain for others to create further knowledge.’

As Hopkins’ postdoc drew to a close, she knew that she wanted to keep working at the interface of research and application. When she learned that DSTL’s chemical detection team was  looking for an aerosol chemist, the role ‘sounded like it was made for me’.

Hopkins has since progressed to become a team leader in chemical detection, and although she is still passionate about research, she has discovered that she prizes her role as a leader even more. ‘I have science to deliver, but the team comes first. Developing the team’s capabilities – our facilities, or helping people meet their aspirations – is immensely rewarding.’

Her 10-person team now identifies and develops new tools for detecting chemicals to serve the needs of the Ministry of Defence and other government departments. Each problem requires a different approach, she explains, according to its final purpose: what’s being detected, the environment or circumstances and who’s doing the detecting.

One of Hopkins’ latest projects involves ‘through-barrier’ detection – identifying chemicals inside a container. ‘It’s based on spatially offset Raman spectroscopy; you take two Raman measurements at different positions and each spectrum will have a component of a Raman spectrum from the container and also the sample.’ Combining the two spectra allows the response from the container to be subtracted, leaving only the spectrum of its contents. ‘So, for example,’ Hopkins hints, ‘you can determine whether or not a bottle of shampoo is actually a bottle of shampoo.’

As well as unique problems to solve, DSTL also offers unique opportunities for Hopkins to provide her expertise around the world, which included a subterranean soujourn in Boston, US. ‘I was looking at the transport of particulates and gases on the Boston underground,’ she explains. ‘Which is quite challenging when the trains are still running.’

Hopkins admits her work is quite different to academic life, and the nature of her work means that her research is often classified. But she explains that DSTL cannot rely solely on its staff to innovate – it must be open and collaborate with external partners. So she still attends conferences and her team publishes its work as much as possible. ‘And when we’re developing technologies that we want to put into service and make commercially available, it’s essential that we engage with industry,’ she adds.

Hopkins predicts that DSTL’s unique mix of fundamental and applied research is likely to keep her here for years to come. ‘Chemistry itself is a broad science,’ she continues, ‘[and at DSTL] there are mathematicians and physicists and engineers, every discipline you can think of … the breadth of science probably isn’t appreciated externally.’