Toxicologist with pesticides on the brain

Vanessa Fitsanakis’ career in toxicology goes all the way back to the farm where she grew up. Helen Carmichael traces her journey from agriculture to academia

Vanessa Fitsanakis uses her neurotoxicology expertise to research pesticides’ impact on the nervous system. Her career in science has encompassed chemistry, mathematics, social science and neuroscience, but Fitsanakis says that its roots lie in rural Tennessee, where her family has farmed for generations.

Growing up, Fitsanakis spent her days in the hay fields, riding horses and rounding up cattle. ‘We also grew tobacco, which was extremely labour intensive and required a lot of pesticides,’ she explains. So it is perhaps not surprising that her research focuses on the relationship between pesticides and diseases of the nervous system, such as Parkinson’s disease. 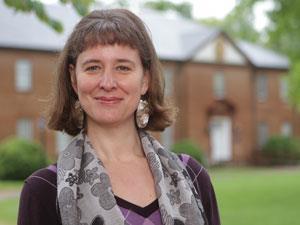 Chemistry with a purpose

Even at high school, Fitsanakis recognised that biology could best be explained through a deeper understanding of chemistry. This led her to take chemistry and mathematics as an undergraduate, a background that she says has served her well. ‘While doing my graduate work in toxicology, I was more fully convinced of the importance of a solid grounding in chemistry. If I could understand the various chemical reactions that led a particular toxicant to interact with DNA, or promote an increase in oxidative stress through production or reactive oxygen species or mitochondrial inhibition, then I had a better understanding of how to prevent these harmful interactions.’

Fitsanakis clearly excelled at chemistry. She was awarded an internship at a biochemistry lab at the Medical College of Virginia after her second year at university, with the encouragement of her chemistry professor, Richard Lura. ‘At the time, it was almost unheard of for a second-year student to get such a placement, but he believed in me and my abilities and helped me get a position in a lab,’ says Fitsanakis. ‘I absolutely loved it, and knew from that point that I wanted to continue in research.’

Her PhD advisor, Doyle Graham, was another significant mentor, ensuring that Fitsanakis attended scientific meetings as an early graduate student, and introducing her to several leading toxicologists. Looking back, Fitsanakis says that both mentors contributed significantly to her success. ‘They also showed me that high standards of professionalism and ethics are important in science. Finally, they helped me recognise the importance of treating all of my colleagues (students, faculty, and staff) with respect, not just those who are in superior positions.’ Today, Fitsanakis is paying her mentorship forward: her own students attend the international meeting of the Society of Toxicology with her, where they present their research alongside graduate students and science professionals from academia, government and industry.

Their research involves working on the small transparent worm Caenorhabditis elegans to model the effects of pesticide exposure on the nervous system. ‘We do this in the context of Parkinson’s disease, autism and autism spectrum disorders, as well as neurodevelopment,’ says Fitsanakis. One of her favourite research topics is how glyphosate-containing herbicides could increase people’s susceptibility to neuronal cell death, which is associated with Parkinson’s disease. The latest tests look at whether C. elegans’ eggs exposed to these pesticides have a greater chance of subsequent neurodegeneration, even if the hatched worms are never exposed to the pesticide. As well as helping with Parkinson’s disease research, this work has important implications when looking at the effects of environmental exposure to common farm chemicals.

Fitsanakis not only grew up on a farm, but also still lives in a rural community with many farming neighbours. ‘Often people in this community see research as something that is esoteric and not applicable to their daily lives. I am able to help them recognise that their tax dollars are being used in their own community to address questions that are important to them. It helps give them a different perspective about the importance of the national science budget.’

Fitsanakis also finds time to bring science to children, visiting rural schools in the foothills of the Appalachian Mountains. She uses the topic of brain safety to discuss the importance of wearing cycle helmets and other protective gear. ‘For many of the schoolchildren, it is the first time they’ve ever met a real scientist. It is really gratifying to encourage them to pursue chemistry or biology as they go through school.’

Fitsanakis has also started to do outreach work with patients who suffer from neurological illness and their families, offering support so that they can understand their conditions. ‘I would love to be affiliated with a hospital system or a neurology practice as a neuro-consultant,’ she says. ‘Using my neuroscience and chemistry backgrounds, I would be able to provide a much-needed service.’

Whether in the lab or out in the field, Fitsanakis clearly takes the wellbeing of what’s inside our heads very much to heart.