Beyond the finite: the sublime in art and science 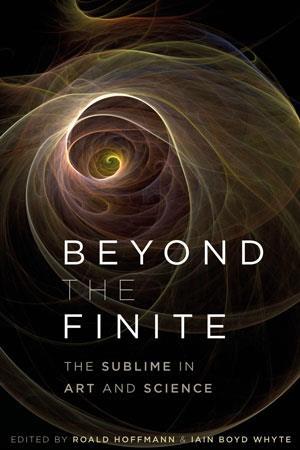 A conference essay collection should be more than the sum of its parts; it puts you at the conference, with all of its surprises, lacunae and synergies. Beyond the finite: the sublime in art and science does one better, compiling four essays originating at a 2005 conference on The sublime in art and science, plus five more, in hopes of raising new discourses in science based on aesthetic considerations shared with art. The tensions and blue-sky philosophising that result make you feel as though you were at that Los Angeles conference in 2005: curious, a bit off balance, and ultimately intellectually charged.

Part of that wobbly feeling comes from tensions over the definition and use of the term sublime. Co-editor Whyte’s introductory essay defines it as the attempt to explain those things we find inexplicable:  ‘The terror engendered when human existence is threatened by forces beyond its control or comprehension is the dynamo, therefore, of the sublime aesthetic.’ The articles following Whyte’s line of historical consideration range from Jaak Pankseep’s essay on the psycho-mechanical origins of our aesthetic responses (where the sublime comes from) to Scott Bukatman’s evaluation of what’s so terrifying and beautiful cinematically created life in science fiction.

Whyte’s definition of the sublime is contested by James Elkins’ warning of the sublime’s prosthetic nature; the sublime should not, he cautions, be a catch-all for unexplainable scientific phenomena, or a fuzzy blanket for over-awed art critics. Elkins forces deeper considerations of how we discuss the insensible, a theme pursued vigorously in Margaret Stafford’s essay where she urges escape from the ‘cognitive meltdown of the sublime’. The theme is also taken in Roald Hoffmann’s view that synthesis, the key to Stafford’s transformation of sublime imagery, plays a similar role in modern chemistry, resulting in a new sublime in science. These essays in particular raise fascinating epistemic questions.

Each of the essays collected in Beyond the finite offers an interesting facet on the theme. However, they rely on each other in combination to create new space for discussion of the sublime, rendering it accessible to audiences of scientists, philosophers, artists and combinations thereof.