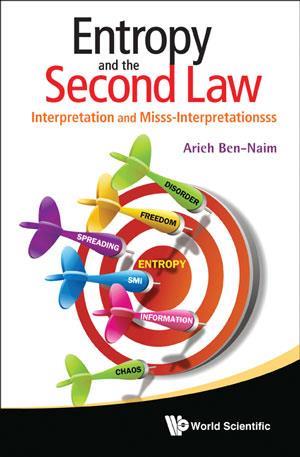 In the long-running debate about the best way to teach and understand entropy in thermodynamics, Arieh Ben-Naim forcefully advocates the probabilistic interpretation of thermodynamic entropy in terms of (Claude) Shannon’s measure of information (SMI). The SMI is an equation, which is not immediately obvious, that sums the logarithm of each microstate’s probability, weighted by its probability, over all of a system’s microstates.

In guiding readers ‘in choosing their own interpretation of entropy’, Ben-Naim confronts a number of so-called ‘misss-interpretationsss’ [sic]. These include the qualitative descriptors of disorder, chaos, freedom, mixing, spreading and even information, all of which frequently lead to ambiguity and confusion. For example, mixing is equivalent to expansion, or a uniform distribution has higher entropy than a non-uniform one. He maintains the superiority of SMI over the equivalent equations proposed decades earlier by Ludwig Boltzmann and Josiah Gibbs because of SMI’s greater generality to any distribution of any kind of information, a somewhat tenuous name-change. He saves his strongest criticism for Frank Lambert, the main advocate of explaining entropy change as the dispersal of energy. This is the approach inspired by Rudolf Clausius’ equality, which equates entropy change to heat flow divided by temperature. In a biblical allusion, Lambert is diplomatically compared to a lion’s carcass bringing forth the honey of this book.

Of all these approaches, is there a best way to understand entropy, let alone teach it? Macroscopic or microscopic? Qualitative or quantitative? Familiar or abstract? A difference between states or an absolute state? The state of a person who already understands entropy may be fairly well defined but there are many more paths of learning leading to it. Even though the SMI belongs to the core theory for predicting entropy, does that make it the best way to learn it? Building on a long series of books, Ben-Naim does a thorough job in making the SMI a familiar and intuitive quantity. He presents his case in a very readable examination of entropy’s multifaceted nature, and contends that even Humpty-Dumpty might one day be put back together again.

Purchase Entropy and the second law from Amazon.co.uk