In situ with Ewine van Dishoeck

The pioneering astrochemist on art, gathering strength and taking the leap into a new discipline 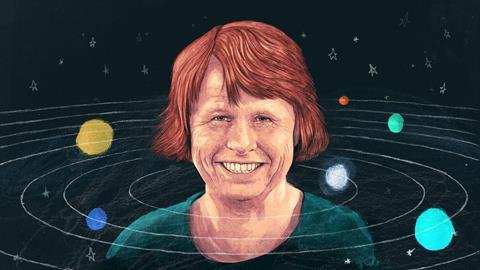 Ewine van Dishoeck is professor of molecular astrophysics at Leiden Obervatory in the Netherlands, and the president of the International Astronomical Union. One of the pioneers of astrochemistry, her research focuses on interstellar molecules and how these evolve during the formation of stars and planets. She has received numerous highly prestigious awards for her research, including the Spinoza Prize in 2000 and the Kavli Prize in 2018.

On the birth card that my parents made for me you see a little baby crawling towards a university building. So my parents clearly had an academic career in mind for me. I also like very much the quote that they gave me: ‘Vires aequiret eundo’, she will gather her strength on route. I think that’s a very important message. You don’t go from being a PhD student to being a star in one shot, you have to gather strengths to make it work.

When I was 13 years old, my father retired and he went on a sabbatical in San Diego. We went along for six months, and I enrolled in a public high school. In Holland, I was in the Dutch Grammar School, which was very thorough – lots of Latin and Greek. And here in this high school I could choose the topics that I wanted. That was my first exposure to science. My teacher was very inspiring. Teachers are incredibly important.

Dare to look elsewhere. Your research career never goes from A to B to C to D – be prepared to make an interdisciplinary jump. I wanted to do a quantum chemistry PhD in Leiden, but the professor had just died. My boyfriend (now husband) Tim had just had a lecture from a professor in astronomy about interstellar molecules, which had just been discovered. He said to me, ‘Well, there’s molecules between the stars, isn’t that something for you?’ I’m extremely fortunate to have ended up in this field.

It was so important for me to spend six years in the United States. At top institutions in the US, you make so many connections that you only later realise how important they are. It’s so important for young people to build up their network across the world. Don’t go too early into a faculty position because teaching takes up a lot of your time – stretch those postdoc years because they never come back.

In astronomy, a lot of our data become public after a year, sometimes they’re even public immediately. This is good! But somebody from outside our collaboration can simply grab our data and publish it before us. Although I must say that the culture is such that in many cases, somebody who is using your data will contact the PI and say, ‘am I interfering with the work of some PhD students?’ Because we try to avoid that.

We let PhD students, even sometimes master’s students, be principal investigators on an observing proposal, even on the most powerful telescopes. When they get their proposal accepted, and they get the data, they are super excited. That certainly helps in terms of motivation and ownership of the data.

Having a passion for what you do is incredibly important. That is something I try to show to the students that I teach, and instil enthusiasm in them. What I’m missing most with Covid is the direct, eye-to-eye interaction – asking a question and getting a response, having a little conversation in the class.

I think an optimal group size is anywhere between 10 and 15 people. I like a diverse group, in terms of gender, nationalities and background. Some people in my group come from chemistry, others from astronomy. I try to run my group as openly as possible, meaning that I encourage them as much as possible to work with each other rather than everything having to go through me, and to speak up in meetings.

Working from home, I miss the round table in my office that holds about five people. On a normal working day, if I had no committee meetings or teaching, there would be nonstop meetings on different topics around the table. That I just enjoyed the most.

My advice to young people is to make sure you excel in one area. Take a steep trajectory early in your career – seize opportunity. Position yourself such that you get noticed, and you’ll have a larger chance of ending up where you really want to end up.

Every summer we go camping somewhere in the western part of the United States, in the middle of nowhere. I turn off my iPhone and my laptop. Making sure that you step away from your work from time to time is really very important.

I curated an exhibition on art and astronomy in one of the museums in Leiden last year. It ended just as Covid was striking. It was a lot of fun. I collect art a little bit myself but it was also an opportunity to bring this to the larger public. We had 60,000 people visit.

Unfortunately I don’t have the time at the moment to play the violin. I used to love playing both in a more classical orchestra but also playing Hungarian and Romanian folk music. That’s wonderful. I met my husband playing in a gypsy music orchestra.