How to change minds about our changing climate 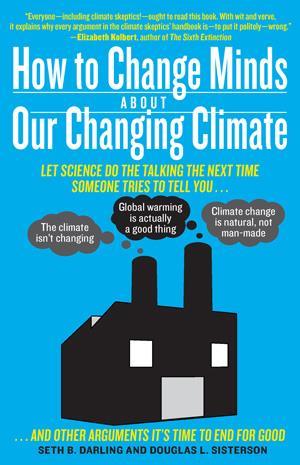 Even though the overwhelming evidence for human-caused emission raising the global average temperature exists, there remain dissenters on the matter, which are not untypically encountered in various social settings: enter Brad, our fictional ‘hero’, and personification of a mind we might seek to change.

Brad comes armed with 15 lines of arguments that aim to disprove the existence of climate change or certainly of any human culpability for it. He argues that climate change might even be good for us or, as a compromise, that there’s nothing we can do about it. Each of these arguments proves to be an Aunt Sally that is readily decapitated by an accurately thrown baton of scientific fact.

The later chapters, including the epilogue, attend to the sentiment of ‘there’s nothing we can do about it’, which is shown to be more inertial than real. The crux of the matter here is transferring the psyche from a passive fatalism of acceptance to an empowering momentum of forward-planning and action. Tenets, such as ‘carbon taxes or cap and trade systems will destroy the economy, kill jobs and hurt the poor’, are shown to be invalid and probably an inversion of the truth.

The authors conclude that there are limits to the amount of energy that can be provided from most renewable energy sources such as wind, geothermal heat and tides and waves. The only naturally replenishing source that can meet human energy demand – projected to rise from 18TW now to 30TW by 2050 – is the sun. However, adapting to the decline in conventional oil supply will pose a critical challenge for the mechanics of civilization.

The book is written is a conversational style and is highly readable, all the more so because the detailed technical points are illustrated with leavening humour and hand-drawn illustrations in appropriate places.

PurchaseHow to change minds about our changing climate from Amazon.co.uk