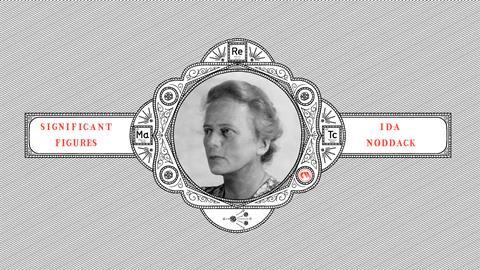 Ida Noddack and the trouble with element 43

The German chemist discovered one element and may have been the first to suggest nuclear fission – but her legacy is troubled, as Rachel Brazil discovers

‘We want a heroine or a martyr’ when we read about forgotten women scientists, says Brigitte van Tiggelen, the Science History Institute’s director of European operations. Ida Noddack does not fit that description. Her legacy is complicated by her work for the academic regime set up by the Nazi government in 1930s Germany, which likely clouded post-war judgement of her work. But even before the war, Noddack’s insights were ignored and diminished by scientific contemporaries. As well as discovering the element rhenium, one of the last of the naturally occurring elements to be discovered, she suggested that bombardment of heavy nuclei could lead to their breakup, four years before the idea of nuclear fission was widely accepted. But disputed claims to have discovered the element technetium, as well as the barriers she faced as a woman, have left her uncelebrated and her story largely forgotten.

Ida Tacke was born in 1896 in Lackhausen, Germany, the daughter of a lacquer and varnish manufacturer. She studied chemical and metallurgical engineering in Berlin, and was one of only 20 women across Germany to gain a PhD in 1921. The likely plan was for her to return to her family’s business, suggests van Tiggelen, but Ida clearly had other ideas. She had met Walter Noddack, a former doctoral student of Walther Nernst, and who was now at the prestigious Imperial Physical Technical Bureau chemistry division. In 1923, she began working in his lab as an unpaid ‘guest researcher’, joining his hunt for the missing elements below manganese in the periodic table (atomic numbers 43 and 75). In 1926, they were married.

Although she clearly did not have the status of Walter, van Tiggelen says Ida herself made it clear they were co-workers, developing the analytical procedure that would be needed to isolate the elements together. They started looking in minerals containing manganese and then platinum, and surveyed about 1800 ores, including meteorites. Finally, in 1925, with Otto Berg from Siemens & Halske lamp factory carrying out x-ray spectroscopy, they announced they had identified both rhenium (75) and element 43. When Ida presented their results to the Association of German Chemists that year, the chair noted that she was the first ‘female colleague’ to address the association.

Element 43 became a stain on their reputation

The Noddacks had only isolated 1g of rhenium by 1929, but subsequently larger quantities were found in the ore molybdenite, so that by the mid-1930s, 120kg could be produced every year. They were granted patents for various applications, including lamp filaments and catalysts, and were nominated for several Nobel prizes without ever winning.

But the situation was different for the second element they claimed to have detected but were unable to isolate. ‘Element 43 became a stain on their reputation,’ says van Tiggelen. Their discovery was disputed but they refused to back down and referred to the element by the name they gave it – masurium. ‘They were accused of being completely inflexible, and not withdrawing their claim, even when it was more or less shown to them that it could not have been element 43,’ says chemist and writer Eric Scerri from the University of California Los Angeles in the US.

Although they tried to isolate the element into the 1950s, they could not do so, because it undergoes radioactive decay and only exists naturally in minute traces (from more recent uranium decay). ‘Never in their [wildest] dreams did they imagine it would be a disappearing element,’ says van Tiggelen. Ultimately element 43 was created artificially in 1937 by Emilio Segrè and Carlo Perrier, by bombarding a molybdenum plate with a deuteron beam, and in the 1950s it was officially named technetium.

In 1988, Belgian physicist Pieter van Assche and US colleagues re-analysed the Noddacks’ x-ray data and argued that they had detected technetium. He noted they only claimed to have observed it in ores containing uranium, a correlation that would have been unknown in 1925 and which van Assche calls the ’credibility test’. But the majority opinion is still that even if traces were present, it would not have been possible to detect the element above the background x-ray signal. ‘It would have required their instrument to have a level of efficacy that was much higher than they claimed they had,’ says Van Tiggelen.

Ironically, while her failure to discover element 43 can be put down to a lack of understanding of nuclear chemistry, it was Ida’s observations on the possibility of nuclear fission that showed her in some ways to be ahead of others in her thinking. In 1934, Enrico Fermi suggested that he had discovered elements 93 and 94 (neptunium and plutonium), which he proposed had formed from nuclear fusion when uranium was bombarded with neutrons. But Ida, with her expertise in element-hunting, criticised Fermi’s conclusions, in a paper she published without Walter (who perhaps saw this as too controversial).

In her paper, she said that Fermi had not ‘compared his new radio-element with all known elements’. He had stopped at lead, which was the established endpoint of radioactive decay. Ida also said his products did not show the expected properties based on their positions in the periodic table. Instead, she suggested, ‘when heavy nuclei are bombarded by neutrons, it would be reasonable to conceive that they break down into numerous large fragments which are isotopes of known elements but are not neighbours of the bombarded elements’. This was five years before the confirmation of fission by physicists Lise Meitner and Otto Frisch, but as van Tiggelen concedes, ‘She certainly is not the one who discovered it, because she didn’t have a theory [or have] experimental proof … but she was the first to suggest this.’

Unfortunately her ideas were met with derision from the rest of the overwhelmingly male scientific community. Her suggestion was rebuffed by leading German scientist Otto Hahn, who repeated Fermi’s results between 1935 and 1938, eventually realising that he had formed barium from the bombardment of uranium. ‘[But] for those four years [they] tried all kinds of crazy accommodation for the things they were actually seeing,’ says van Tiggelen. When Walter brought up their dismissal of Ida’s idea, Hahn reportedly told him that he chose to ignore it because he didn’t want to ‘embarrass’ his wife.

Van Tiggelen says her sex was not the only reason her ideas were rejected outright. ‘[The Noddacks] were not well regarded anymore, because of the [contested] masurium claim.’ It was only decades later that Hahn did admit she had been right, having previously refused to give her any recognition. Until her death, ‘she was bitter that no famous chemist or famous physicist listened to her’, says metallurgist Fathi Habashi from Laval University in Quebec, Canada. Habashi met and corresponded with Noddack after meeting her at a conference in Germany in the 1950s. He recalls on one visit she showed him an ashtray made of rhenium, that had been given to her by the mining company who extracting the metal.

The other factor from the 1930s onwards was the rise of Nazism in Germany and the Noddacks’ involvement. ‘They were not members of the Nazi Party, but they definitely were supporters of this kind of ideology,’ says van Tiggelen. In 1935 Walter was promoted to a professorship at Freiburg University, after the removal of Jewish chemist Georg Hevesy, and in 1941, the couple moved to the University of Strasbourg, then under German control. ‘Apparently, Hitler regarded the University of Strasbourg as the jewel in the crown,’ says Scerri. ‘[The Noddacks] were celebrated as a great German couple, doing something similar to Marie and Pierre Currie,’ adds van Tiggelen. Ironically, given the Nazi’s regressive ideology on women’s roles, this was the only time that Ida had a paid university professorship.

After the war, Germany went through the process of denazification, and only those academics who had been exonerated could retain their jobs. Ida and Walter were officially exonerated, but they were tainted and could not find positions at any major universities. Eventually Walter set up a geochemistry institute in Bamber and Ida returned to her role as an unpaid assistant. In this atmosphere, criticism of their claim to have discovered element 43 continued and Segrè even accused them of being dishonest about it.

Historian Gildo Magalhães Santos from the University of São Paulo, Brazil, recently re-evaluated Noddack’s work and thinks her scientific ideas were far more penetrating than has generally been recognised. In the one book she wrote for a popular audience, for example, she wrote that science is made up of a continuous revelation of truth. ‘This kind of thing was not common in the 1930s or 40s when she wrote the book,’ says Santos. With her understanding of elemental distribution, she also suggested that sea animals would make use of traces of heavy metals that could be found in seawater – pre-dating the discovery of the cobalt-containing vitamin B12.

She could be extremely conservative, even while expressing other revolutionary ideas

One of the bold ideas she put forward was the hypothesis that the creation and distribution of elements in the universe was not random but linked to nuclear properties. ‘She called it the universal distribution of the elements … and this idea was very important,’ explains Santos. It led her to the hypothesis that, analogous to electron structure, the nucleus of an atom is itself structured, with particles in different shells as atomic number increases. Eventually this highly speculative idea gained ground, with a physics Nobel prize awarded for nuclear shell theory in 1963. ‘It turned out to be perfectly correct,’ says Scerri. ‘It was almost another prediction [of hers] that came true.’

Not all her ideas were useful though. She thought that matter should be organised based on isotopes, rather than the newer concept of atomic number. ‘She had an extended periodic table, where the isotopes were the fundamental pieces, and not the elements by themselves,’ explains Santos. She thought a classification based on the nuclear structure could provide a more ‘natural’ system. Chemists did not ultimately find this idea useful and Scerri suggests it’s an example of how she could be extremely conservative, even while expressing other revolutionary and speculative ideas. ‘That’s often the case with with great scientists,’ he adds.

While Ida Noddack may have once been seen as the German Marie Curie, she isn’t remembered in the same way. In contrast to Curie, ’she lacked a “fan club”’, says Santos. But assessing the work of past women scientists is difficult, cautions van Tiggelen. ‘There are a lot of pitfalls and one of them is of course over-crediting.’ What she achieved will always be complicated by the times in which she lived, both in how she was treated as a woman scientist and her own role in the academic machine of the Nazis. For Santos, she stands out as a scientist who should be remembered for her bold thinking. ‘She was not afraid of putting up a hypothesis, even if it was not easy to prove.’