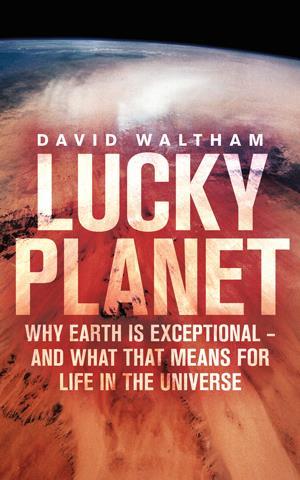 In Lucky planet, David Waltham argues that planets as friendly to life as the Earth are probably rare in the universe.

Waltham’s basic argument is that given the sensitivity of Earth’s climate to changes in atmospheric composition, the variations in Earth’s albedo (the reflectiveness of its surface) and the increasing luminosity of the Sun – and the complicated feedback loops between all of these things – it is astonishing that our planet has remained continuously habitable for the last 4 billion years.

Given the numerous possibilities for disaster (including both runaway ice ages and runaway greenhouse effects), there seem to be only two possibilities: either the Earth’s climate system has been extraordinarily well regulated throughout its history, or we have been extraordinarily lucky. After examining the various proposals for natural climate stabilisation mechanisms, Waltham argues that the latter explanation is the more likely.

Waltham also points out that although the Earth has been habitable for almost its entire history, we cannot infer from this that such an outcome was likely or inevitable. Regardless of how rare habitable planets may be – and Waltham argues that ours may be unique in the observable universe – it is inevitable that intelligent observers will find themselves living on one. This is simply the observational bias that the history of our planet must be compatible with our existence, and it tells us nothing about the likelihood of finding life elsewhere in the universe.

Moreover, as Waltham notes in the book’s concluding chapter, the rarity of habitable planets would explain why we see no evidence of intelligent neighbours. After 50 years of increasingly sensitive observations, the Search for Extraterrestrial Intelligence has revealed no evidence for other technological civilisations in the galaxy.

Nevertheless, although Waltham’s arguments are persuasive, it would be premature to adopt them uncritically. We simply do not yet know enough about the universe to be sure of our ground. Only by continuing to explore our neighbouring planets, and by making increasingly detailed observations of planets orbiting other stars, will we get a firm handle on the prevalence, or otherwise, of habitable worlds in the cosmos.

Whatever one may think of its conclusions, Lucky Planet is a well-written, engaging, and thought-provoking addition to discussions of extraterrestrial life. I recommend it highly to anyone with an interest in such things – which ought to be all of us!