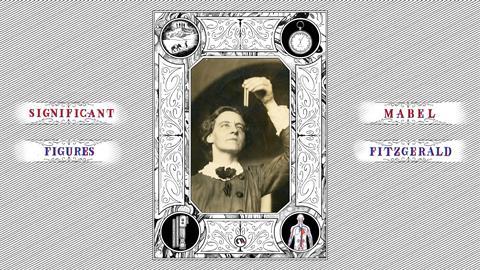 Mabel FitzGerald and the mystery of oxygen sensing

Katharine Sanderson celebrates the tenacious and brilliant researcher who came tantalizingly close to describing oxygen sensing, a concept that earned the Nobel prize over 100 years later

In 1911 a group of four scientists set off in relative luxury to the top of Pikes Peak, a mountain just outside Colorado Springs with an elevation of 4300m above sea level. This group included ace biologist John Scott Haldane who was intent on getting some more data to investigate the effects of high altitude on the respiratory system in humans. Arriving by train at the summit, Haldane’s team spent five weeks there in a comfortable hotel conducting meticulous experiments. They investigated the alveolar partial pressure of oxygen and carbon dioxide in the expedition members during acclimatisation to altitude, and throughout their stay. They also took measurements of haemoglobin concentration and oxygen capacity of the blood.

Meanwhile another ace, yet less well-known biologist was also scaling the mountains around Colorado, but in significantly less luxury. That biologist, Mabel FitzGerald, gathered data on how altitude affects blood oxygen levels at incremental altitudes, in the miners and other residents of the many small towns she passed through. Her research was to be instrumental in working out how our body responds to changing oxygen levels. Her contributions outside the circle of expertise she worked in have long been overlooked.

Mabel Purefoy FitzGerald was born in 1872, in the family home at Preston Candover in Hampshire where she lived with her four sisters and two brothers. But in 1895, at the age of 22, her world changed dramatically. Both her parents died unexpectedly from illness and Mabel found herself living in the Purefoy family home – Shalstone, in Buckinghamshire, England – with her grandmother and sisters. During her year living in Shalstone, FitzGerald’s interest in physiology and medicine was ignited – she often went on rounds with the village doctor.

After a year the sisters all moved to Oxford and found themselves at 12 Crick Road. Their neighbour at number 11 was to be a huge influence on FitzGerald’s life and career: J. S. Haldane himself. Although it’s nice to think that the neighbours bonded over their shared love of biology, it’s unlikely they would have met then, says Martha Tissot van Patot. A physiologist turned writer based in Colorado, US, Tissot van Patot has spent much of the past 10 years finding out more about FitzGerald’s life and research, and is writing her biography.

Her interest in medicine already affirmed, FitzGerald started a pursuit of education that never stopped. At that time women weren’t allowed to get degrees from the University of Oxford, but they were allowed to attend lectures. And this is what FitzGerald did. In 1896–7 she studied some chemistry and biology, and then in 1897 enrolled on a physiology course. She was the first female student in the medical school at Oxford. FitzGerald’s desire to study medicine, and gain a degree in it, was a driving force in the direction of her career. At Oxford she completed more than 1500 hours in the medical curriculum, and attended three years of clinical training with William Osler, Regius professor of medicine. But her lack of a degree didn’t mean that she didn’t have influence at Oxford. She did so well in the physiology exams that Francis Gotch, a physiology professor, altered the rules to allow women to officially sit the exams.

FitzGerald started her research career at the same time, working with Gotch and histologist Gustav Mann. FitzGerald’s expertise in staining and histology, learned in Mann’s labs, was critical to her later success, says Tissot van Patot. FitzGerald’s work with Mann led to her first single-author paper, a trend that continued throughout her career. ‘They let her be the sole author of her papers,’ Tissot van Patot remarks on FitzGerald’s mentors and colleagues.

FitzGerald travelled on her own, carrying her equipment by mule, slowly ascending the mountain

After a brief research position in Copenhagen, Denmark, FitzGerald returned to Oxford in 1905 and began work with her one-time neighbour, Haldane. They were researching the role of carbon dioxide in the respiratory system. In 1907, with the encouragement of Osler she applied to the Rockefeller Institute in New York City and became a research fellow there. While in the US she tried again, unsuccessfully, to be admitted to study medicine. She would never succeed with her quest, despite many attempts.

On returning to Oxford, Haldane invited her to take part in the Pikes Peak expedition in 1911. The team set off for Colorado, but it was decided that it wouldn’t be safe for a lone woman, unchaperoned, to join a group of four men atop a high mountain.

FitzGerald and began work with her one-time neighbour, Haldane, in 1905. In 1911, the team set off for Colorado, but it was decided that it wouldn’t be safe for a lone woman, unchaperoned, to join a group of four men atop a high mountain.

So instead, FitzGerald undertook her own part of the expedition – to measure effects on the human body at intermediate altitudes. Arguably this was a far less safe option. She travelled on her own, carrying her equipment by mule, slowly ascending the mountain, through a string of mining towns. ‘It’s so courageous,’ says Tammie Bishop, lecturer in hypoxia at the University of Oxford. FitzGerald’s journey was in stark contrast to the men’s team, ascending by train and staying in a hotel.

The Pikes Peak expedition was critical in helping to shape our understanding of how the body responds to changes in oxygen. Until that point, Bishop says, scientists thought that the way the body responded to oxygen was a fixed process, and wouldn’t change with lower levels of oxygen. The Pikes Peak team, building on Haldane’s work and others, changed that thinking.

FitzGerald, in her studies, looked at people who were fully acclimatised to the altitude, at different gradations between sea level and Pikes Peak summit. She showed that as the altitude rose – and levels of oxygen decreased – there was a corresponding increase in haemoglobin levels in the people she sampled. There were also increases in breathing, and so a decrease in carbon dioxide. And all studies showed differences between men and women.

Her own partial pressure of carbon dioxide didn’t change to small changes in altitude, she found, but her haemoglobin levels rose. In his inaugural J S Haldane lecture at Oxford in 2019, oxygen-sensing expert Peter Ratcliffe said: ‘Really that ought to have been the clue that it was probably oxygen that was being sensed’. ‘She doesn’t quite hit the nail on the head,’ says Bishop, but adds that FitzGerald’s 1913 paper containing her findings was the first evidence that the body is able to sense oxygen. Ratcliffe and his colleagues then unpicked and uncovered the process behind that, Bishop says.

Even though she’s the sole author, people still referred to it as Haldane’s work

In 2019 Ratcliffe, together with William Kaelin and Gregg Semenza, was awarded the Nobel prize in physiology or medicine for discovering the molecular mechanisms behind oxygen sensing in cells, and how animals respond to changes in oxygen using these pathways. FitzGerald, in her work on that climb to Pikes Peak, almost reached the conclusion that there was an oxygen sensing mechanism at play.

The four Pikes Peak male scientists published their findings on their return. FitzGerald took a bit longer to write up her experiments, but when she did, another single-author paper was published in 1913. Despite these stand-alone publications, her contributions tended to be lumped together with those of Haldane, says Tissot van Patot. ‘Everybody knew Haldane. Everybody knew she was working with Haldane. So even though she’s the sole author, people still referred to it as Haldane’s work,’ says Tissot van Patot. ‘It was society. That’s what buried her.’

But for researchers in the field of hypoxia and oxygen sensing, FitzGerald remains part of the story. ‘Mabel is a hero for many in the field,’ says Nobel laureate Ratcliffe. ‘Her work has long been unrecognised and is still unrecognised by many.’ And Ratcliffe’s own remarkable scientific story itself starts with her: ‘It would be fair to say that Mabel FitzGerald’s work was one of the first to describe the sensitivity of adaptation to altitude (and hence low oxygen) at different levels. It was this sensitivity that was later reflected in the erythropoietin response to minor perturbations in blood oxygen that led me into the field,’ he says.

After he was awarded the Nobel prize, Ratcliffe made sure to commemorate FitzGerald’s work. He included the Pikes Peak single-author paper in his Nobel speech to show to the audience in Stockholm. And he also donated Haldane’s barometer, which FitzGerald used to take measurements on Pike’s Peak, to the Nobel Museum.

FitzGerald’s research interests were far broader than the Pikes Peak expedition, and she published 12 papers in total. The last of these papers was published in 1915. Even after 1915 she remained an active scientist. In 1915 she was invited to be a clinical pathologist at the University of Edinburgh, and she also became a lecturer in bacteriology at the Royal College of Surgeons. Tissot van Patot says that well into her 60s she continued to take classes. But she never did get accepted to take a full medical degree, and returned to Oxford in the late 1930s.

FitzGerald died at the age of 101 in 1973. When she turned 100 a year earlier, among her birthday presents were a telegram from the Queen, an honorary MA from Oxford and membership of the Physiological Society. These last two gifts were perhaps a little late. After all she has been a member of the American Physiological Society for 60 years. In a 1999 biographical paper by Oxford physiologist Robert Torrance he suggests that these gestures were prompted out of a sense of guilt: ‘Oxford and England felt rather guilty about her: they had ignored her.’

Katharine Sanderson is a freelance journalist based in Cornwall, UK