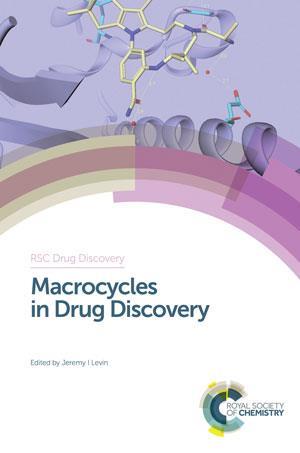 Macrocycles are ring-shaped molecules containing 12 or more ring atoms. Many important drugs belong to this structural class, for example the immunosuppressant cyclosporine or the antibiotic vancomycin. Macrocycles’ ability to bind difficult targets that are considered ‘undruggable’ by traditional small molecule drugs has produced much interest. Recent innovations for designing de novo macrocycles and for screening large combinatorial macrocycle libraries have given an additional impulse to the field’s development. The book is a well-made snapshot of current research, describing development stories of established macrocycle drugs and their properties, as well as new avenues in their development.

The book’s 11 chapters, written by distinguished experts, are mostly dedicated to macrocycles for a specific protein target or target class. The targets discussed include heat shock protein, tubulin, histone deacetylases, kinases, proteases, G-protein coupled receptors, integrins and protein–protein interactions. Several authors provide introductory sections about the general characteristics of macrocycles, meaning that there is a small overlap between some chapters. However, this is not negative at all as it offers different perspectives on the topic.

Most established macrocyclic drugs are based on natural products that were identified in bacteria, fungi, plants or other organisms. Consequently, the majority of molecules discussed are natural products or derivatives thereof. As nature does not offer macrocycles for every therapeutic target, scientists have designed new macrocycles, which are also covered in the book. Chapters are dedicated to the design of kinase inhibitors and to intriguing strategies for developing macrocycles de novo by mimicking protein epitopes such as ß-hairpins or a-helices.

To develop novel macrocycles, it is essential to understand the factors that affect their permeability and bioavailability – important topics that are discussed in the penultimate chapter. The book concludes with a comprehensive chapter on synthetic strategies for the production of macrocycles.

In summary, this title is an in-depth discussion of macrocycle drug discovery. Numerous examples presented along with the compounds’ potency, selectivity, permeability, bioavailability and other properties allow the reader to understand which determinants make a successful macrocyclic drug.