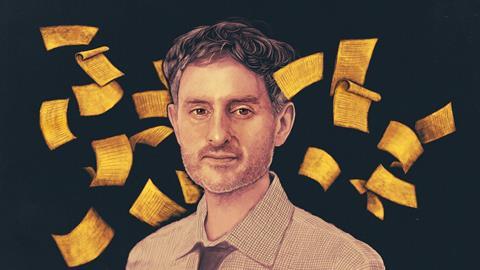 In situ with Mohammad Seyedsayamdost

Mohammad R. Seyedsayamdost is professor of chemistry and molecular biology at Princeton University. His work brings together wide-ranging biological and chemical techniques to discover, study and synthesise small bioactive molecules produced by bacteria. In 2020, he was named a MacArthur Fellow. Informally known as a Genius Grant, this rewards individuals who show ‘extraordinary originality and dedication in their creative pursuits’.

Entering college, I had a premed track in mind. But I didn’t like the memorisation that was required in some of the courses, and I fell in love with organic chemistry, which is a course that I think most pre-med students dislike. Then I took two biochemistry courses, taught by Melissa Moore and Liz Hedstrom, that were really influential for me. I just found it fascinating to be able to explain macroscopic biological phenomena with microscopic chemical principles. And so I chose a research path at the intersection of chemistry and biology.

I ended up being a lab lifer. When I joined Liz Hedstrom’s lab to conduct my undergrad research, I was in there the whole time. I worked there, I studied there, I watched TV there, I ate there, and even slept there. I just loved the lab environment, it became my new home. I loved making discoveries with my own hands and building slowly toward a larger goal.

I am one of those unusual professors who does as much lab work as possible. That thrill of discovery is just different when you do it yourself versus your students walking into your office and telling you what they found. The latter is also exciting, but doing it yourself is another level. It’s getting more and more difficult, but I still maintain a bench.

I give my lab members a fair degree of autonomy. I view it in part as a training exercise, because one day they need to be independent lab heads. They need to be able to generate ideas and hypotheses, and test them effectively.

I look for people that are really passionate about science and the kind of work that we do. If they’re not and they view research more as a 9-5 job, there’s nothing wrong with that, but then our lab is probably not the right fit. Students/postdocs that are driven, independent, want to answer questions, and love our research areas are excellent fits for the group.

It’s a hobby that just happens to be a job

We have four subgroups in the lab, four larger project areas. Most students usually sit on presentations from each of the four subgroups. It’s a great training tool because each lab member is exposed to such a diverse array of methods and so many different ways of thinking. When I started the lab, I made a rule that students had to attend every subgroup. Now I don’t even have to patrol it. Everybody just automatically shows up and is really eager to see what the other subgroup has been doing in the past several weeks. So that tells me that they appreciate it as well.

We work on microbial natural products, small molecules synthesised by bacteria and fungi that are released into the environment where they carry out a number of different functions. Our work spans the biology and chemistry of natural products and everything in between. Each project typically develops into several new avenues that we are then interested to follow up as well. It becomes a little bit difficult to maintain depth, while at the same time having this large breadth of projects, but that’s also the fun in it. You’re always learning new things. I have to put in a lot of extra hours to keep up, but I don’t really view it as work. I love doing it, it’s a hobby that just happens to be a job.

One year, I reviewed 20 papers for one specific leading journal. If you counted other journals, I was probably in the neighbourhood of 50 papers total that I had reviewed that year. And here I was trying to figure out where my time had gone!

You have to be really good at saying no in science today, which is an odd way of putting it. There are so many demands on your time. If you don’t, you give up time for what matters most, and that is science and research. Some requests are easier to turn down than others though. For example, service to the community and advancing careers of younger researchers is part of our duty. Given how many tenure letters were written for me to go from assistant to associate and associate to full, it’s only fair that I would do the same for others.

I’m all about sports. When I was a kid, I would come home from school, and then it was basically one sport after another until I went to bed. I always thought I’ll be a professional tennis player; I actually played in college. When I graduated, I had the best singles tennis record in Brandeis University history. I don’t have a whole lot of free time, but I still play as much sports as I can, especially tennis and football.