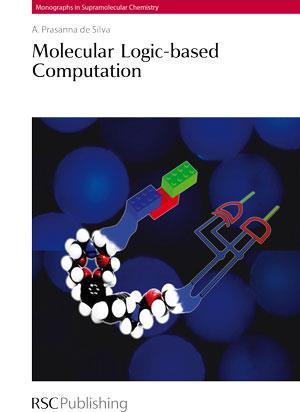 It is 20 years since A Prasanna de Silva published the first experimental molecular logic gate. Since then, the relatively young field of molecular logic as an approach to small-scale computing and its increasingly diversifying applications have attracted much interest. Now de Silva presents his book Molecular logic-based computation.

Despite many very good reviews about the field, this excellent, timely and very comprehensive book closes a gap. The pioneer status that the author enjoys in the field leaves no doubt about the authoritative character of the work.

Molecular logic has always been strongly driven by photophysical and photochemical phenomena, but has recently received new drive from bio-inspired contexts and materials chemists’ contributions. The author pays tribute to these new directions and developments and describes the state of the art in a systematically organised, yet integrative style.

The first part of the book provides the less familiar reader with a brief but very useful introduction to the concept of molecular logic. It also provides an understanding of the photophysical basis of the concept at a level that is sufficient to follow the design principles of the luminescent logic gates and circuits discussed later on. This sets the stage for the molecular logic work that follows in the main part of the book.

The author has done an excellent job in comprehensively covering molecular systems designed for logic functionality as well as systems that behave as logic devices without this design, as was emphasised in the original publication. Conveniently, the logic characteristics of the functions are used as the ordering principle. The final part of the book is dedicated to the different applications of molecular logic in sensing, probing, diagnostics and medical therapy.

The book will serve the expert, as well as interested scientists from other specialties related to any aspect of molecular logic. It is also a complementary text for graduate studies in supramolecular chemistry and will hopefully be a source of inspiration for progress in molecular computing.