On the cucumber tree: scenes from the life of an itinerant jobbing scientist 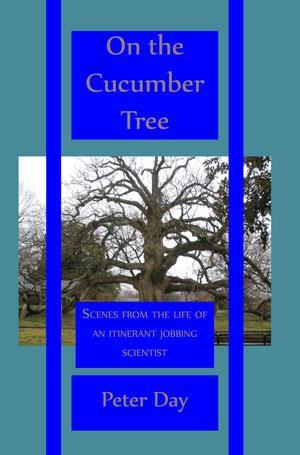 On the cucumber tree is an illustrated memoir by an Oxford inorganic chemist who directed institutions in Grenoble, France and London and worked with institutes in Europe and the US.

Day spent 20 years at St John’s College, Oxford, except for 1966–67 when he was at Bell Telephone Labs (BTL). His collaboration with Melvin Robin at BTL on mixed valence compounds led to the Robin-Day classification. Day’s appointment as demonstrator in Oxford in the 1960s, like those of later directorships, needed neither advertisement nor interview. He directed the Franco-German-British research reactor, Institut Laue-Langevin (ILL), Grenoble, for three years and ran the Royal Institution 1991–98.

The title apparently means ‘on the climb’. One might query the words itinerant and jobbing in the subtitle, but Day expounds on several aspects of hierarchies and relationships. As an undergraduate when the chemistry syllabus was ‘organic, inorganic, physical and practical’ he was shocked by some dismal chemistry lectures. Conscious that speculative science researchers in the 1960s and 70s were fortunate in funding, Day appreciated the advantages of small research groups. He supported the Nato science programme and its Advanced Study Institutes (ASI). If they did not enhance Nato military capability – I recall flying in a Warsaw Pact aircraft between two parts of an ASI – they certainly seeded scientific collaborations. As chief executive of a non-profit company incorporated in France, Day reflects on the influences of France’s governing elite and unions.

Despite its name, hinting at an assured income, the Royal Institution was beset by problems. Day saw them as physical – the imposing facade needed renewal, financial – a deficit and no funding stream, and organisational – archaic and anarchic. His greatest disappointment was the lack of a Millennium Fund grant to reconstruct the building and provide a home for the British Association. Lottery funding enabled his successor to achieve partial refurbishment.

That Day almost chose arts instead of science at school shows in this elegantly written view of the influences on science and scientists in the later 20th century.