Publishing and the advancement of science: from selfish genes to Galileo’s finger 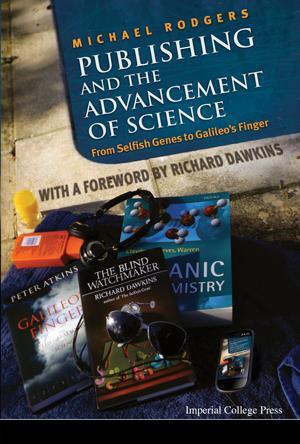 While the business of popular science books is booming, science publishing is perhaps an overlooked career choice. Michael Rodgers, author of Publishing and the advancement of science, certainly thinks so. Having stumbled into publishing from a budding academic career, Rodgers became an expert in his field. Here, he turns his hand to the other side, authoring a book that, as his epilogue suggests, he hopes will inspire at least one science graduate to consider a career in scientific publishing.

Rodgers’ insider account tells the story of several blockbuster books, from Richard Dawkins’ The selfish gene to textbooks that many readers will remember with fondness from their university days – including Peter Atkins’ Physical chemistry, a book that has brought clarity to confounded undergraduate chemists worldwide. Rodgers’ writing illuminates some of the complexity in bringing such hard-hitters to life and reveals his peculiar skill of picking the next bestseller before any words have graced the page.

These behind-the-scenes glances might inspire the curious to take their first foray into the field, but there is also plenty here for those without such aspirations. Rodgers gives glances into how popular science publishing and communication has developed over the past decades, going as far back as his friend and forebear, James Crowther, the world’s first scientific journalist, appointed in 1928 to write for the Manchester Guardian.

Rodgers breathes life into his reminiscences, which carry the reader along. He describes his thrill at reading the first chapters of The selfish gene and compellingly narrates the book’s preparation for publication, right down to the selecting of the first edition’s surrealist cover (painted by zoologist Desmond Morris). However, much of the text is touched with a nostalgic (and slightly self-congratulatory) tone that slows the pace and which I found made parts of the book a difficult trudge.

We leave Rodgers in his closing pages reflecting on his retirement. His account offers some interesting glimpses into a little-seen world, which might inspire budding writers to start their own bestseller. Or, better yet, it may encourage would-be publishers to continue the pursuit for great science books long after Rodgers’ retirement party has ended.

Purchase Publishing and the advancement of science: from selfish genes to Galileo’s finger from Amazon.co.uk