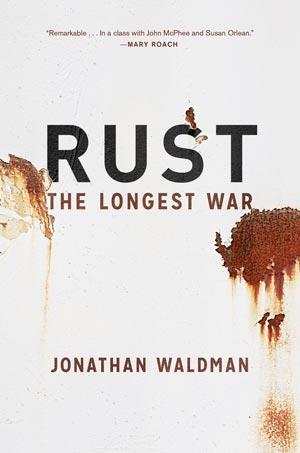 ‘Corrosion is not a sexy topic,’ affirms Dan Dunmire, director of the US Department of Defense’s office of corrosions policy and oversight. I can’t help but agree. But a remark from Scott McCarthy, the corporate relations director at Ball Corporation, a global packaging company, that nobody would want to read about rusty coke cans is simply wrong.

Dunmire and McCarthy are two figures amongst a myriad of fascinating characters that Jonathan Waldman introduces you to in Rust. Anecdotes, history, politics and science seamlessly merge together in this scintillating and refreshing read about a conflict few of us are aware of, even though we cross the battle lines every day.

Next time you crack open a can of coke or tip out a tin of beans take a moment to appreciate these indispensable yet seemingly simple containers. Their coatings are designed on a food-by-food basis to offset corrosion.

For rust is everywhere, and it’s actually more common to be concealing rust rather than preventing it. Honestly, it’s hard to criticise people’s complacency – the corrosion community is reclusive, secretive and suspicious. Waldman successfully infiltrated the clique to diligently research his topic however, and you can feel his hard work. But that’s all part of the story. Although this contextual approach means this is not a heavyweight science book, Waldman strikes the perfect balance.

Each chapter immerses you in a unique tail of defiance. The chapter on restoring the Statue of Liberty was one of the most entertaining, if alarming. Like cans, we take her presence for granted. Yet if a plaque commemorating her restoration rusts within a year, how are we meant to safeguard more important things like bridges and oil pipelines? With difficulty, it transpires. But ignore rust at your peril, for it’s no joke. In fact, Waldman spent two years asking corrosion engineers for rust jokes but not one surfaced. One thing corrosion is though is a money pit, while securing funds to prevent it in the first place is an altogether different battle.

Steaming through Waldman’s insightful, sharp and elegant prose was easy and a delight. I’ll be recommending this book to everyone.