Serving the Reich: the struggle for the soul of physics under Hitler 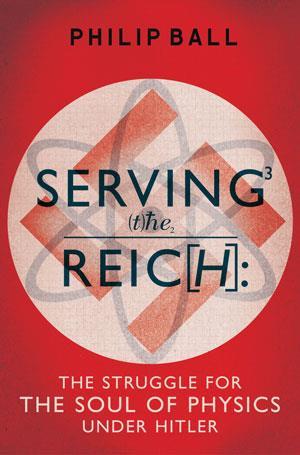 For me, the most memorable moment in the TV comedy series Extras came courtesy of Kate Winslet. Playing a fictionalised version of herself, she’s on set, the star of a film about the Holocaust, when an extra commends her for ‘using your profile to keep the message alive’.

Winslet replies, ‘I’ve noticed that if you do a film about the Holocaust – guaranteed Oscar!’ A few years later, life imitating art, Winslet won a best actor Oscar for her role in 2008 Holocaust film The reader.

Some might wryly suggest that in picking Nazi Germany as the backdrop for his latest book, Philip Ball is trying to break into the upper echelons of non-fiction literary accomplishment with that weightiest of weighty topics.

But we know better than that. Ball is a veteran science writer, and one untroubled by status – his writing appears everywhere from Chemistry World to the most high profile of newspapers and magazines. But he does appear to be troubled by the reputations of long-dead scientific luminaries.

Serving the Reich is about three of the biggest names in physics: Max Planck, Werner Heisenberg and Peter Debye. All three were hugely important figures in Nazi Germany. Planck: the elder statesman; Heisenberg: the precocious young prodigy; and Debye?

Much has been already been said about the moral questions faced and the compromises made by the other two. But the history of the Dutch physicist Debye – who rose to become head of the most important research facility in Nazi Germany, before leaving for the US in 1940 – has had less attention. That was until a book in 2006 written by a Dutch journalist suggested a darker past, one in which Debye cooperated with the regime. The book received criticism from historians but several well-known scientific institutions nevertheless moved to distance themselves from the Debye name.

Here, then, is an attempt to set the record straight about Debye, who is the focus for much of the book. The picture it creates is complex, and there are no simple answers, but Ball seems prepared to point the finger when he feels he needs to. If he has a general thesis, it’s that the three physicists reacted in broadly the same way as the majority of their peers, making occasional small acts of resistance, but, for the sake of their work, careers and positions in society, rarely risking direct confrontation. They were, Ball says, human; all too human.

What intrigued me most was how they saw science – its norms, its purpose – and how that informed their actions. The book is as much about the philosophy of science as the history, and Ball clearly has an expert grasp of both. The question of how scientists view their work is as important today as it was then. Stem cells, climate change, bacterial resistance: the output of scientists working in these areas has the potential to change the world for all of us. What is it these scientists believe they are doing? What is it they think they’re part of? Some parts of the community may squirm under such scrutiny, but we all have the right to ask.

Nazi Germany and the world wars of the early 20th century provided an extreme environment culturally, socially and politically, and that environment tested the population in unique ways. It has lessons about all areas of human activity: art, economics, religion. And science. The scientists of the time did not exist in a bubble – however much they may have wished to.

Did we need another book about it? Absolutely – now more than ever. And this, I think, is a good one.

Purchase Serving the Reich from Amazon.co.uk