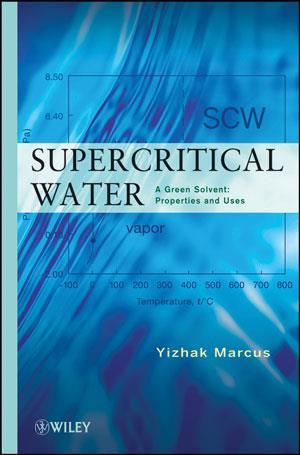 Supercritical water, scH2O, is a high temperature and pressure fluid with a legendary reputation for corrosion, second only to that of hydrogen fluoride. The truth is somewhat less alarming, but the properties of scH2O are nevertheless intriguing.

This is an interesting monograph that focuses on the properties and spectroscopy of scH2O with a brief review of its applications on a laboratory and industrial scale. Its strength is that it includes the work of several Russian scientists whose contributions to the field may not always be familiar to a wider audience. For example, it describes the outstanding spectroscopic work of the late Yuri Gorbaty who used remarkably ingenious cells to record transmission infrared spectra of water at 500°C and 150MPa.1

The author approaches from a physical chemistry point of view with plenty of equations and figures. A slight disappointment is that the discussion has been deliberately limited to water above its critical point (Tc = 374°C, pc = 22.1MPa), with almost no mention of near-critical water, which is potentially quite important as a solvent for cleaner organic reactions.

The book’s title promises both ‘properties and uses’. Sadly, the chapter on applications is a little superficial. The title also describes scH2O as a green solvent but, although we agree that scH2O can be green,2 we could find no discussion in the text of when and why it might be considered so.

The book is nicely produced but unfortunately there are typographical errors (for example, apparent confusion between ‘binodal’ and ‘bimodal’). The text cries out to be edited for English, which would make everything so much more readable.

We have not checked the references, but a cursory glance at the citations of our own papers revealed two mistakes. Perhaps it’s just bad luck if an author misspells the surname of his book’s reviewer? Even so, this book is a potentially valuable addition to the literature. It will not appeal to everyone but should be read by those working in the field.