Undeniable: evolution and the science of creation 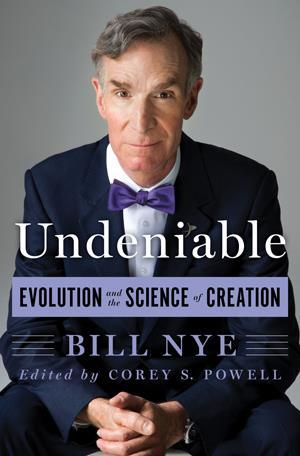 Bill Nye’s Undeniable is an account of Darwin’s theory of evolution with a good overview of the scientific research that make evolution, in Nye’s view, ‘undeniable’. It takes the reader from the origin of our planet to the origin of our species and even beyond, to the possibilities of alien life. The book is written for non-scientists in an easy-to-read style, flowing almost like a transcript of Nye’s oration, rather than penned as prose for a book. There are likable moments where Nye inserts snippets of information from his own past and his personal journey with science.

Unfortunately, Undeniable may alienate international readers from its very first chapter. This book is a crusade against creationism in US politics and education. Although I agree with Nye’s arguments, writing a whole book as a platform to debate with such a specialised group is unnecessary or at the least irrelevant for many readers. One would assume his creationist opponents will not be amongst the readers, and there is nothing scientifically controversial which demands acquiescence from an ‘evolution believer’. The book’s audience may just be those hoping to equip themselves with evidence for the debate.

Although some great scientists are referred to, value could have been added by some actual citations to other general science books. Most readers may not appreciate the further reading, but with this book based on the importance of scientific process, it feels a shame to leave out a fundamental aspect of scientific communication – that of providing sources. There also seem to be some glaring omissions, such as Richard Dawkin’s The selfish gene in the chapters devoted to just this topic.

If you have never read a popular science book on evolution, this will be a compelling and enjoyable read. The scientifically literate might well pick up some interesting facts or information on recent progress. This is very much an entry-point for newcomers to the concept of evolution (and its detractors), rather than for those with an understanding of the significance of this theory.

PurchaseUndeniable: evolution and the science of creation from Amazon.co.uk