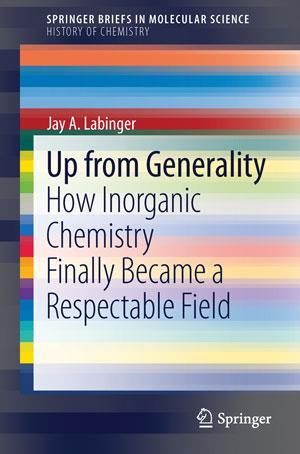 A case can be made for inorganic chemistry being the oldest branch of our subject, developing from studies on metals and metallic ‘salts’ from ancient times and progressing to the theories and observations of Antoine Lavoisier, John Dalton, Humphrey Davy and others in the 18th and early 19th centuries.

This book is really an extended essay on inorganic chemistry, concentrating on the period from the mid-20th century to the present and in particular the upsurge – the so-called ‘renaissance’ – proclaimed in the 1950s. Labinger’s account of this and of later developments in the subject is perceptive and interesting.

In the first two chapters, covering the subject in the 19th century and into the first half of the 20th century, the author’s views on early inorganic chemistry seem unduly minimalist. There is no mention of the great pioneers listed above, though Edward Frankland, Dmitri Mendeleev and Alfred Werner do appear.

For Labinger and, he suggests, for many of his countrymen, the subject really starts after Ronald Nyholm’s ‘prescient but premature’ announcement in 1956 of the renaissance of inorganic chemistry, born of advances in structure, bonding, mechanistics and organometallic studies.

The book is US-centric, and describes inorganic chemistry at Labinger’s workplace, the California Institute of Technology, in the mid-1950s. Here, the eccentric but now largely forgotten Don Yost kept a vast chemical archive (including, incongruously, used train tickets), together with material directed against his bête noir and uncomfortable colleague, Linus Pauling.

Labinger feels that inorganic chemistry is now a coherent discipline, unlikely to fragment, and with an assured future. His book is well written, well-referenced and gently provocative. However, as a soft-bound book of only 77 pages, with poorly-reproduced monochrome images, it is outrageously expensive.

Purchase Up from generality from Amazon.co.uk