As our everyday gadgets become more advanced, the battery technology used to power them lags further behind. But help is at hand, as Simon Hadlington discovers

As our everyday gadgets become more advanced, the battery technology used to power them lags further behind. But help is at hand, as Simon Hadlington discovers

Last summer a small number of owners of new laptop computers were astonished to see their machines spontaneously burst into flames. The fault was quickly traced to rogue battery packs, forcing the battery manufacturer, Sony, to recall some six million units worldwide. It has been estimated that this cost the company ?90-?130 million and its share price duly suffered.

If nothing else this episode illustrates that the humble battery, the Cinderella technology in the world of consumer electronics, is big business and is integral to the smooth functioning of many modern products. While the rapid pace of innovation in electronics and information technology has continued unabated, with gadgets such as MP3 players and hand-held computers now commonplace, battery technology has lagged. 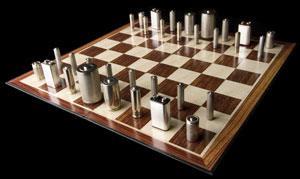 Rechargeable batteries are almost ready for the next move

At the University of St Andrews in the UK, Peter Bruce’s group explores new materials for the next generation of rechargeable batteries. ’Portable energy storage is more important now than it has ever been,’ Bruce says. ’There has been a phenomenal growth in portable electronic devices and they are all demanding in terms of a supply of electricity - and the only way of doing this practically in the foreseeable future is by a rechargeable battery.’

Batteries will also play a key part in the development of new, self-powered medical implants, in ’hybrid’ vehicles that run alternately on combustion engines and batteries, and in energy storage for renewable power sources such as wind and solar.

Each type of battery will require different characteristics in terms of storage capacity, the number of times the battery can be discharged and recharged, and the cost of the materials.

The concept of the rechargeable battery is elegantly simple. Two electrodes are separated by an electrolyte that is an ionic conductor and electronic insulator. Charging the battery involves applying an electrical potential to force cations - lithium, say - up an energy gradient into the anode, where the ions are intercalated within a crystalline lattice. When the two electrodes are connected via an external circuit this pent-up chemical energy is released: the positive ions drift across the electrolyte and fall into an energy well within the cathode; at the same time, electrons flow to the cathode via the external circuit, providing an electric current. 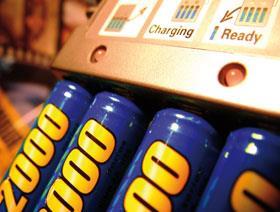 Within this system there are several ways to improve the battery, depending upon the priority required for the given application.

’Most research effort on rechargeable batteries is focused on lithium technology,’ says Bruce. ’Lithium batteries can store more energy than other systems because they can operate at a higher voltage. Most water-based battery systems [such as nickel-cadmium, where the electrolyte is in an aqueous solvent] are limited to around 1.5 to 2 volts, whereas a lithium battery can give 3 to 4 volts per cell.’

Rechargeable lithium ion batteries were introduced commercially by the Sony Corporation in the mid-1990s. A lithium cell that sits in a laptop computer typically consists of a graphite anode and an cathode whose ’active’ ingredient is a lithium-transition metal oxide, such as LiCoO2, with the two electrodes separated by an electrolyte of lithium hexafluorophosphate dissolved in an organic solvent.

So materials chemists are looking for new electrode materials that can store more lithium at a higher voltage in a way that is inexpensive, safe and not toxic. The system must also be capable of being cycled - charged and discharged - hundreds or thousands of times with no appreciable loss of efficiency.

Since the introduction of the lithium cell, most improvements to the technology have relied on engineering rather than chemistry. For example the positive electrode consists not only of the lithium transition metal oxide, but also of conducting additives and binders. Over the years new manufacturing processes have allowed the proportion of the inactive components of the electrodes to be lowered, giving way to a greater quantity of the lithium-containing compound. But this has effectively reached its limit and new approaches are needed. 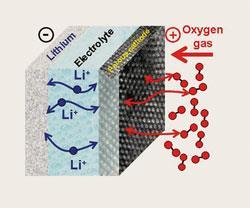 In a lithium air cell, lithium ions react directly with oxygen in the air

In current lithium batteries based on LiCoO2 cathodes, only ’half’ a lithium ion is available for shuttling between the electrodes. ’Much recent work worldwide has focused on how to get that extra half lithium into the system,’ says Bruce. However this will only double the charge stored and more radical approaches are required to go further. ’One approach that we have been taking is to remove the intercalation host altogether, and let the lithium react directly with oxygen in the air. Our idea is to get rid of the supporting lattice, which occupies weight and volume, and replace it with air in a porous electrode. The lithium entering the electrode reacts directly with gaseous oxygen in the air contained within the pores to form lithium oxide. In this system we have removed cobalt, which is heavy. What has been surprising is not that lithium reacts with oxygen, but that the reaction can be reversed.’

Early results have shown that such an oxygen electrode can store significantly more charge than conventional systems relying on intercalation chemistry. Storage is expressed as milliampere hours per gram, and LiCoO2 can typically store 140 mAhg-1, with a theoretical maximum of some 300 mAhg-1. Bruce says the oxygen system could in theory give a storage that is five or 10 times greater than this.

Bruce’s lab has also had success in increasing the performance of intercalation materials by combining chemistry and novel fabrication techniques. The St Andrews researchers have synthesised LiNi  Co  Mn  O2 using a new route that results in a macroporous material delivering a higher capacity at high rate than is currently possible.

Sony has already improved this aspect of the negative electrode by using an alloy of lithium and tin, which can store between 700 and 1000 mAhg-1. Bruce’s laboratory has experimented with anodes made from nanowires of titanium dioxide, which stores electrons at a higher voltage than many other electrode materials. This can be a useful characteristic in systems where low voltages result in adverse reactions with the electrolyte or where rapid charging and discharging is needed.

Along with storage capacity, a key characteristic of a rechargeable Li-ion battery is just how rechargeable it is: how many times it can be cycled without appreciable loss of capacity.

ngstr?m Advanced Battery Centre of Uppsala University in Sweden, Josh Thomas’s team is expert in examining in unprecedented detail the interfaces between the electrodes and electrolyte. Changes at these interfaces throughout the lifetime of the battery largely dictate the cell’s cyclability and are also fundamental to the safety of the system. 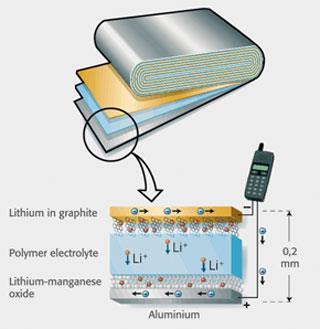 ’In a battery, two materials with different chemical potentials are separated by an electrolyte,’ says Thomas. ’A typical system operates by transferring lithium ions from a transition metal oxide host into graphite. During the lifetime of the battery, certain degradation products collect at the electrode surfaces. These can lead to unwanted reactions, in which the heat generated can in turn cause further degradation, resulting in a process called "thermal runaway". This can bring about potentially hazardous instabilities within the system.’

Paradoxically, the initial stage of the degradation of the electrolyte is critical in stabilising the electrodes, but excessive subsequent degradation is undesirable. At the surface of the electrodes, lithium ions react with the electrolyte to form a layer of typically lithium fluoride, lithium carbonate or organic lithium compounds. ’This forms an extra interface on the surface, which initially has a stabilising effect,’ says Thomas. ’If this layer, called a passivation layer, did not form, the graphite negative electrode would delaminate and eventually disintegrate. The important thing is that this layer must remain permeable to lithium ions during subsequent cycling of the battery. It’s a bit like a brick wall with some bricks missing - a supporting structure that still allows lithium through. However, the presence of the layer increases the resistance of the battery, which in turn generates heat - something that must be minimised.’

One way of mitigating thermal runaway is to experiment with additives in the electrolyte so that the initial passivation layer is more stable and less likely to grow upon subsequent cycling. Such additives can include large organic molecules that degrade to form a stable passivation layer; alternatively, complexing agents can be placed at the interface that chemically scavenge ions or molecules within the electrolyte to form a stable film.

’The whole issue of degradation is key to the efficiency and cyclability of the battery, as well as to its safety,’ says Thomas. ’It is important to minimise the loss of capacity during the lifetime of the battery by improving the efficiency of ion transport in and out of the electrodes. If lithium ions react with products within the electrolyte to cause this layer to grow, some lithium is effectively removed from the process. Ideally, you want the same amount of lithium to move in and out of the electrodes on the thousandth cycle as on the first cycle. If you lose only one per cent of the lithium on each cycle, you won’t have much capacity left after a hundred cycles.’

We are, it seems, so near and yet so far from a new era of rechargeable battery technology. While gadget technology moves at an alarming pace, the humble battery is still playing catch-up.

Simon Hadlington is a science writer based in York, UK. 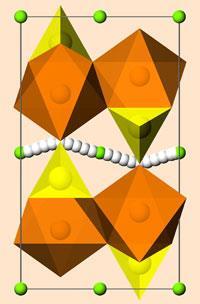 In any solid state battery, the way that ions move in and out of their intercalation host is crucial to the way that the entire system functions. To obtain this information experimentally is tricky. It is here that computer modelling can play an important role as a kind of virtual microscope on a nanostructured world.

At the University of Bath, UK, Saiful Islam is applying advanced computational techniques to throw light on how lithium ions move in and out of different electrode materials, including the role played by dopants, tiny quantities of impurities that alter the electronic characteristics of the system. ’If we want to develop lithium battery technology further, we will need new functional materials,’ says Islam. ’If we can get a better understanding of the structural and dopant chemistry of new materials on the atomic level, we should be able to rationalise some of their macroscopic behaviour.’

The Bath researchers construct their so-called atomistic simulation models by mapping the interatomic forces between the atoms of the crystalline material. For example, one material that is being investigated is LiFePO4.

’The first thing we have to do is accurately represent the forces between all the ions in the crystal - these forces include long-range electrostatic interactions and short-range potentials.’ says Islam. ’If we have done this correctly, our modelled lattice should reproduce the experimentally observed crystal structure.’

Once this has been confirmed, the researchers are in a position to model a range of important properties such as how lithium diffuses within the lattice. ’Essentially the lithium ion is traversing a potential energy landscape,’ says Islam. ’We are able to map the contours of the peaks and valleys of the potential energy within the system. The diffusing ion wants to follow the pathway of lowest energy.’

Such energy maps should help to provide routes to new battery materials.