Chemist in the cabinet

John Denham gave up life in the lab for a career in politics, and now runs the British government's department for science. Richard Van Noorden meets him

John Denham gave up life in the lab for a career in politics, and now runs the British government’s department for science. Richard Van Noorden meets him

One of the least-recognised faces in Gordon Brown’s cabinet is, surprisingly enough, a chemistry graduate. John Denham was installed in June 2007 as Secretary of State for the newly created Department for innovation, universities and skills (Dius). 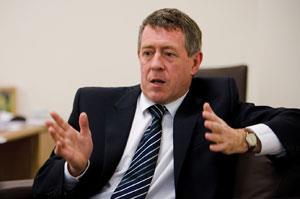 Though it’s not obvious from its title, Dius is the British government’s champion department for science - and Denham is its boss, one level above science minister Ian Pearson.

Denham moved into politics after studying chemistry at Southampton University in the 1970s. ’The plan was to stay on for a doctorate, working with Geoff Luckhurst on computer simulations of liquid crystal systems,’ he told Chemistry World. But that could not compete with the political vistas opened up after a sabbatical year as president of the university’s students’ union. After working at the British Council and development charities through the 1980s, Denham built a reputation as a principled politician, most famously resigning as Home Office minister in 2003 over the government’s plans to invade Iraq.

At Dius, Denham takes ultimate responsibility for maintaining the UK’s research base and translating raw science into economic benefit. But supporting science doesn’t come cheap, and the past year has been marked with complaints about inadequate funding. Most recently, the Science and Technologies Facilities Council announced that, following Dius’s new budget settlement, it faced an ?80 million shortfall over the next three years (see Chemistry World, February 2008, p2). Following the same settlement, the Engineering and Physical Sciences Research Council (EPSRC) has found it must cut the volume of science it funds up to 2011.

’The reality is that we have a growing budget in real terms, and that’s a pretty significant success at a time when public expenditure’s been tight,’ Denham stoutly maintains. On the idea that he might step in to remedy any perceived shortages at a particular research council, Denham points out that government interference is limited by the UK’s much-debated ’Haldane principle’ - that researchers, not politicians, should decide what to spend their funds on.

As for the possibility of future raids on UK research councils - along the lines of the ?68 million taken by the Department for Trade and Industry (DTI) in March 2007 to mitigate its own overspending (see Chemistry World  April 2007, p10) - Denham can only promise that ’the budget is ring-fenced, and to breach that is a very significant departure from what we promised the scientific community.’

Some researchers fear that politicians’ emphasis on translating technology will affect blue-skies science. ’Fundamental research is not threatened at all by the drive to increase economic impact,’ Denham said when he announced the science budget in December 2007. Exploiting science successfully, he told Chemistry World, just means being alert to opportunities for spin-outs and interdisciplinary work. ’The Higher Education Innovation Fund, for example, which was really relatively small [?238 million for 2006-08], has actually brought about a cultural change in a lot of universities. It was just enough to get people saying "perhaps we could do things differently without damaging our fundamental research".’

A further exhortation to applied science were the six multidisciplinary research programs introduced in Denham’s science budget, which set aside ?1.3 billion from research councils to study major challenges facing society - such as energy, environmental change, and nanoscience. ’I don’t regard them as a departure from basic research,’ Denham says.

Innovation is a key mantra for Dius - not least because it seems the only way for Britain to keep ahead of the enormous investment in science being made in Asia. ’It’s not just the spending that keeps Britain strong in science, it’s something about the autonomy that universities are able to enjoy, and - though everyone complains - the considerable autonomy that researchers have got to develop their own interests,’ Denham reflects. ’China is making a big investment in science. But they are very interested about the conditions we’ve created that make science flourish.’

Denham also wants to embed scientific evidence and advice in policy making - calling last month for ’every civil servant to have a scientist over their shoulder’ (see Chemistry World, February 2008, p2).

Dictating this bold attitude to other government departments will be a tough challenge though, particularly since departmental spending on R&D has declined in recent years - a point noted by former science minister David Sainsbury in his October 2007 review of science policy and research funding. ’It’s not for me to tell other departments how they should allocate their budgets . but as the department that champions science, we can at least contribute to the debate,’ Denham says. He believes that part of the problem lies with the Research Assessment Exercise, which doesn’t adequately reward scientists who have given up their research time to advise government.

Dius, unlike its defunct predecessor the DTI, doesn’t confine itself to research and innovation. It’s also charged with improving the country’s skills base and education quality, in both the arts and the sciences.

’We certainly need to enthuse students more. We’re nowhere near the volume of people coming through schools who want to study science at a higher level. But I’m not pessimistic about it - I think we’ve got a lot of things going right: ambassadors programmes, science clubs, and extra money going into science teaching,’ says Denham, noting the recent upturn in university applications to study chemistry. There is a growing awareness, he adds, that chemistry graduates are useful in other jobs as well. Perhaps more politicians are on the way?