Science is playing an increasingly important role in sub-Saharan Africa. A number of new initiatives and organisations are helping to promote chemistry in education and industry, as Helen Carmichael finds out

Science is playing an increasingly important role in sub-Saharan Africa. A number of new initiatives and organisations are helping to promote chemistry in education and industry, as Helen Carmichael finds out

There’s a growing recognition in sub-Saharan Africa that better chemistry could help deliver tomorrow’s infrastructure. In recent years a number of organisations and initiatives have been set up to boost chemistry’s role in African education. It may be some years before we see tangible results but the supporting structure is in place and there is much to build on.

Spreading chemistry’s word in sub-Saharan Africa is not an easy task. In some parts of the region, pupils are lucky to garner a basic science education. And where education succeeds, talented scientists often leave Africa altogether, taking their skills with them. 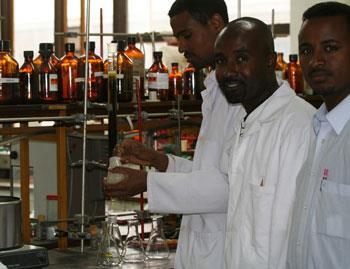 Where African countries have realised educational successes, skilled workers often migrate from Africa to industrialised countries in search of a job. ’In most developing countries the available chemical industries are very few in number. As a result, the limited industries cannot fully absorb the chemistry graduates,’ says Temechegn Engida, president of the Federation of African Societies of Chemistry (FASC). ’This has a great negative impact on the importance people in general and students in particular attach to chemistry and chemistry education.’ Areas such as South Africa buck this trend, however.

To achieve human development goals, the African Union (AU) set up the New Partnership for Africa’s Development (Nepad). John Mugabe, Nepad science and technology adviser, says that at present the continent’s science base is too weak to stimulate and sustain economic change and sustainable development.

Low public R&D expenditure, weak industry-academe links, low and falling enrolment in tertiary science and engineering education and outdated policies and institutions must all be addressed. According to Mugabe, Nepad is supporting a number of countries including Botswana, the Democratic Republic of Congo, Kenya, Nigeria, Rwanda and Uganda to overhaul their science and technology systems. UK prime minister Tony Blair’s Commission for Africa (2004-05) suggested that rich countries should subsidise African universities and create centres of excellence to strengthen the science base, although Mugabe suggests that ’much can be achieved by mobilising and transforming those that already exist’.

The United Nations educational, scientific and cultural organization (Unesco) is also working to promote science and technology education for all in Africa, especially for women and girls. On average about one woman in 100 achieves a tertiary education in Africa.

Rwanda has a novel approach to luring its best emigrant scientists back into the country - a personal phone call from the president offering prestigious research projects and high salaries. In Rwanda, the Kigali Institute of Science and Technology has played an important role in post-genocide reconstruction, with projects such as converting prison inmates’ toilet waste into cooking fuel.

Not all African nations have put science as high on the development agenda as Rwanda. But African chemists are not deterred, and are increasingly collaborating both within the region, and with support from international organisations and others overseas. One key goal is to highlight chemistry’s value to society and regional economies. 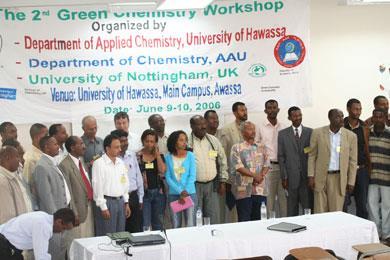 University of Hawassa, Ethiopia, hosted a green chemistry workshop in June this year

The FASC was launched in February 2006 to ’create a network of African chemists to encourage cooperation and help disseminate research results,’ according to its president, Temechegn. A specialist in chemistry education, Temechegn is also vice-president of the Chemical Societies of Ethiopia and a national programme officer at Unesco’s International Institute for Capacity Building in Africa (IICBA) in Addis Ababa, Ethiopia.

’Many African countries have been developing policies that guide the overall directions of research and development in science and technology, although the capacity of many countries to implement the envisaged policies has been affected by many factors,’ says Temechegn.

Recent initiatives directly targeting chemistry include a new strategic plan for Ethiopian chemical industries, Temechegn says, initiated by the Ministry of Trade and Industry. Positive South African science policy is exemplified by its Department of Science and Technology (DST) and National Research Foundation (NRF) research chairs programme which aims to produce 210 new and highly relevant research professorships by 2010. Other programmes of note are new centres of excellence and moves to ’intensify’ the proportion of black citizens and women participating in science.

According to Voluntary Service Overseas science teacher Simon Poliakoff, it’s not necessarily that the equipment is lacking in some African schools. He describes helping biology teachers at a Morsito, Ethiopia, school prepare for a laboratory practical: ’Opening the door to the lab store we were greeted with a strong smell of chemicals. There are many shelves piled high with glassware and chemicals. Most of it has never been used and it is all covered with a layer of many years’ dust’. He practised tests for different foodstuffs with staff. ’As the solution in the test tube slowly began to change to a purple colour indicating that protein was present, the teachers became excited as they saw for the first time practically something they have taught for many years just using white chalk. At that instant I knew that the process of making the science teaching practical had just begun.’

This purely theoretical approach to science teaching is common in Africa, even at university level, according to Unesco. ’How can any country train scientists, let alone promote the national research which is indispensable to development, without experimentation?’ asks Julia Hasler, who coordinates Unesco’s involvement in the Global Microscience Programme. The concept for the programme, which provides small-scale science kits, originated in the University of Witwatersrand in Johannesburg, South Africa, in 1993. The International Union for Pure and Applied Chemistry (Iupac), together with Unesco, launched the programme in 1996, and the microscience kits have now made hands-on experiments possible for primary, secondary and first-year tertiary students in 72 countries, many of them in Africa.

The AAU chemistry department recently started a close cooperation with the University of Nottingham, particularly in the area of sustainable chemistry (see box).

Since 2003, staff at the University of Nottingham, UK, have collaborated on green chemistry with Addis Ababa University (AAU), Ethiopia.

This partnership has led to a successful series of workshops to promote and establish green chemistry throughout Ethiopia, with audiences engaged from high school, universities and established industries. 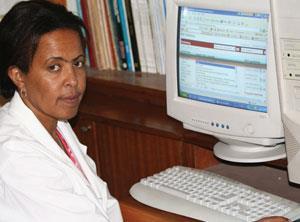 Pete Licence, from Nottingham university’s chemistry department, says that the workshop idea stemmed from a friendship with Nigist Asfaw, who came from AAU’s chemistry department to work in chemist Martyn Poliakoff’s lab in Nottingham. During her stay, Nigist worked on low energy extraction of natural products from plant species endemic to Ethiopia.

Nigist and Licence helped to organise a workshop, which attracted 120 delegates, with the backing of a number of organisations, including the RSC.

They wanted not only to create awareness among the invited groups but also to sensitise policy makers to environmental sustainability and green chemistry.

Over 90 per cent of effluents from Ethiopian industry are discharged into the environment without proper treatment.

Licence is now also a visiting professor at AAU where he lectures on greener and sustainable chemistry. The universities have a graduate student exchange programme underway. PhD student Hareg Tadesse is at Nottingham for three years and another student is expected soon, although UK students have yet to study in Addis Ababa.

In March the RSC launched its Archive for Africa programme, providing free access to its journals back catalogue from 1841 to 2004. According to Mike Hannant, publishing services manager at the RSC, 18 sub-Saharan countries have joined up so far. ’There is now great potential for researchers in these countries to access the content,’ says Hannant.

’Access to international journals in many African countries is still a problem, although the access to RSC journals has significantly improved the situation,’ says Temechegn. However, he notes that the RSC journals are not accessible in Botswana, a country where current literature is in short supply. According to the RSC, Botswana falls outside criteria for free access due to World Bank definitions of country incomes, as does South Africa. Botswana has been made a low-cost offer for archive access but negotiations are ongoing.

According to a recent survey of Africa-published journals by the International Network for the Availability of Scientific Publications (INASP), there are between 400 and 500 journals currently published in Africa. The majority originate in South Africa and Nigeria.

Africa has been slow to join the open access (OA) movement, and there is still confusion about what this entails among journal editors. But some full text versions are now available online as a few journal editors gain electronic publishing skills. A high proportion of journal staff are volunteers. INASP’s Daisy Ouya said that opinions about OA could be summarised as cautiously optimistic. ’Many editors said they faced the dilemma of desiring global visibility while not wishing to risk their journals’ survival. Whereas the benefits are clear, the funding and sustainability concerns were high.’

As Chemistry World  went to press, a congress of African scientists and policymakers met in Alexandria, Egypt, to discuss fundamental topics in science and technology for socio-economic development, ahead of a January 2007 summit of heads of states and governments. Taking place in Addis Ababa, this summit on science, technology and research for Africa’s development is billed as a milestone for African scientists, technologists, policy makers and other stakeholders to convince the leadership that science and technology is an effective weapon against abject poverty and underdevelopment. Let’s hope that more African leaders are swayed by science’s strong arguments and that we are on the verge of a new level of investment and opportunities.

Helen Carmichael is a freelance science writer based in Bridport, UK

According to Clare Wilkes, CIE’s manager for science qualifications, CIE/Cambridge Assessment has a long history of collaboration with education ministries in many sub-Saharan African countries, including Botswana, Namibia, Lesotho and Swaziland. ’Until recently CIE provided national exams for all of these countries,’ says Wilkes. Most of these nations are now setting up their own examination boards (known as ’localising’) with training and capacity building support from CIE. Namibia will be the first to complete the localisation process. ’Once independent from South Africa, Namibia approached Cambridge to help move from the inherited system geared to a small minority to an education system suitable for all,’ says Wilkes. The new curriculum is already successfully in place and the first independently run exams start in 2008.