This is a paid-for advertising feature from ACD/Labs 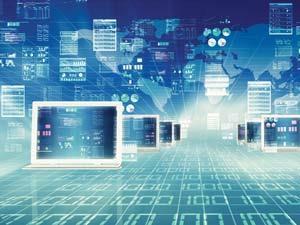 If analysis is at the heart of R&D, then data is its lifeblood. According to a 2015 survey by ACD/Labs, companies typically invest more than $1 million (£680,000) a year on producing analytical data, with eight out of ten scientists depending on data to make decisions. ‘It’s unfortunately seen as a necessary evil by those that are not generating or using it,’ explains ACD/Labs’ Sanji Bhal. ‘Organisations are generally not equipped to manage their analytical data effectively, but it is relied upon to make important, risky, and expensive decisions every day.’

Yet despite being essential to R&D, it can be hard to get data in one place. As the ACD/Labs survey found, nine out of ten companies rely on different brands of equipment for analysis, each with their own systems that aren’t compatible with those supplied by other vendors. ‘People are still struggling to move their data effortlessly,’ says Bhal. ‘And if analytical data are inaccessible, people need to repeat experiments.’

At best, this can be frustrating, at worst, it can cause problems. For example, when a question is raised by regulatory bodies such as the US Food and Drug Administration or European Medicines Agency – scientists may be forced to re-synthesise compounds to start their analysis from scratch at a time where every day costs the organisation money.

These problems are exacerbated by the fact that more than half of data analysis is no longer conducted in house. ‘In the past 10 years there’s been a massive increase in outsourcing in the pharma/biotech sector,’ Bhal states. ‘But often you can’t interrogate the result you get back. It’s dead data – an image with accompanying numbers and text.’ Even when a company receives raw data from the contractor, often it’s returned in a form that’s incompatible.

Another challenge when using a wide range of equipment and software is ensuring that staff have the expertise to use it, says Amin Mirza, head of the structural chemistry team at the Institute of Cancer Research, UK. Multiple systems tend to create ‘islands of heterogeneous platforms’, Mirza explains. ‘The upshot is that we had to invest extra resources in terms of training end users [how to use each system] … some are comprehensive, and can take years to learn.’ Constant updates and changes to existing systems can mean team members need to constantly refresh their knowledge of multiple platforms, trapping team members in training when they could be in the lab.

Perhaps this is why the majority of teams still rely on talking to each other; the 2015 survey found the three most popular methods of sharing data were paper documents (65%), conversations (55%) and images (55%). However, these tried and tested methods often don’t meet the requirements of a modern lab – and can mean data is lost forever. ‘We are using analytical information like a jigsaw,’ Steve Thomas, investigator at GSK, explains. ‘Getting the information in one place is vital – and that used to be in peoples’ heads. But when a colleague retired, that information was lost. We needed a repository of information that didn’t forget, didn’t go senile and didn’t go to a competitor.’

Fortunately for Thomas, GSK elected to move to a connected, vendor-neutral platform from ACD/Labs, ensuring he was able to access – and manipulate – data from any source. 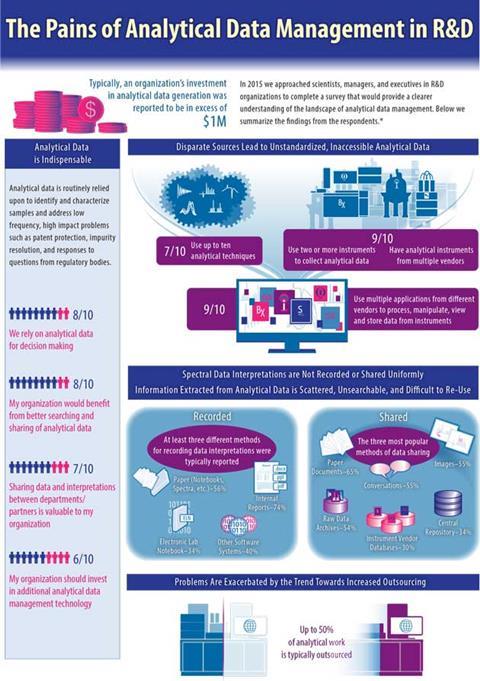 Even better, the system’s ability to keep records and never lose information meant Thomas’ team was able to retain a colleague’s knowledge where they needed it: at their fingertips. ‘It doesn’t care what instrument it’s from,’ Thomas says. ‘All the data is there, filling its place in the jigsaw … It’s like having your top team of colleagues at your elbow.’

Taking these benefits a step further, GSK has used data to create 400 biotransformational maps, Thomas explains, which allows everyone to share knowledge. ‘It takes the serendipity of bumping into a colleague in the corridor out of the equation. Now I can bump into everybody.’

As for Mirza, he reports that the demands of keeping his team up to date on the latest software have been eased since moving to ACD/Labs’ comprehensive platform. ‘Training is much simpler,’ he states. ‘You can train people to one baseline; that really helps.’

And, as the system is vendor-neutral, when a company outsources its analysis, the results can always be accessed and manipulated to find the answers hidden in the noise.

For Thomas, the benefits of data management are clear: ‘It helps you avoid mistakes and get through the data quicker.’