A new drug for treating prostate cancer, developed by rational design and currently making its way through clinical trials, could improve the prognosis, says John Mann

A new drug for treating prostate cancer, developed by rational design and currently making its way through clinical trials, could improve the prognosis, says John Mann

Every year around 34,000 men in the UK are diagnosed with prostate cancer and of these about 30 per cent will die within five years of diagnosis. The comparable figures for breast cancer for women are 45,000 diagnoses and 20 per cent deaths within five years. The contrast between these two sets of figures partly reflects the relative lack of effective drugs for treating prostate cancer once it has spread beyond the reach of the surgeon’s knife. However, rational drug design, in the form of the promising experimental drug abiraterone, may soon provide the answer to this problem. 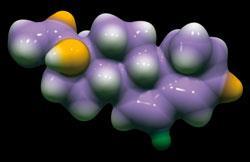 In 1896, the young Scottish surgeon George Beatson reported his view that ’the aetiology of cancer lies not in the parasitic view but in the ovarian and testicular stimulus.’ His evidence came from his practical experience with breast cancer patients, where surgical removal of their ovaries and fallopian tubes resulted in a regression of their tumours. He was unaware that the growth of both breast and prostate cancers were usually controlled by the steroid sex hormones, since these were not isolated and characterised until the early 1930s  Nonetheless, radical surgery involving ovariectomy soon became the norm for the treatment of breast cancer.

The evolution of drugs to treat breast cancer has been well documented, and highly effective control and even eradication of the disease can usually be achieved through the use of the oestrogen-receptor binding agents like tamoxifen, and the aromatase inhibitors like formestane, letrozole and anastrozole. The former agents enter the cancer cells and attach themselves to oestrogen receptor proteins in the cytoplasm, blocking access to their natural binding agents - the oestrogens - and so preventing formation of the receptor-hormone complex that would otherwise interact with the cells’ DNA to trigger a burst of cell replication. As their name suggests, the aromatase inhibitors do just that, blocking the action of the enzyme that forms the oestrogens. All of these drugs are relatively simple and cheap to prepare, so the cost of therapy is kept within reasonable bounds - whereas newer drugs can be much more costly. The new targeted drug Herceptin is a monoclonal antibody that binds to the human epidermal growth factor receptor 2 (HER2) on mammary cancer cells, switching off signals to the nucleus telling the cell to grow and divide. However, the HER2 gene is only overexpressed in around 20 per cent of breast cancers, so the drug is only of use in a limited number of cases.

For men the situation is not so rosy, since drug treatment of prostate cancer is less successful. The prostate gland, the site of seminal fluid production, is normally walnut-sized - but for most males, after the age of about 50 its gradual enlargement leads to progressive problems with urination and, for some, the appearance of prostate tumours that may lead to full-blown cancer and a premature death. 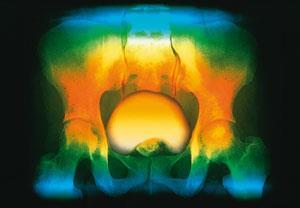 X-rays reveal a prostate tumour, below the large kidney-shaped bladder

As with cancers of the breast, most prostate cancers are hormone-dependent. The Polish endocrinologist Wugmeister was the first to show (in 1937) that a reduction in the levels of male hormones (androgens) could be beneficial in the treatment of prostatic hyperplasia (growth of the prostate so that it presses on the urethra and causes problems with urination). He believed that administering the newly discovered female hormones (oestrogens) to his patients would inhibit the release of the peptide luteinising hormone (LH) from the pituitary (so-called feedback inhibition), with resultant inhibition of testosterone production by the testes since LH acts here to initiate synthesis of the hormone. And he was right. His patients suffering from hyperplasia experienced major improvements in their symptoms when he gave them large doses of oestrone.

Four years later, the US medical doctors Charles Huggins and Clarence Hodges took the next logical step and administered oestrogens (including the synthetic agent stilboestrol) to their prostate cancer patients, and usually coupled this with castration to make absolutely sure that no testosterone was produced. This brutal regime became the standard treatment for the next 40 years, and while it usually caused a regression in the cancers at first, they almost inevitably reappeared because androgens can also be produced by the adrenal glands. What was needed was a more effective means of shutting off androgen production - or a drug like tamoxifen, the mainstay of breast cancer treatment, to deny access of androgen to the cancer cells by binding to the androgen receptors proteins.

The first need was met by the synthetic gonadatrophin-releasing hormone mimics such as leuprolide and goserelin, which act on the pituitary to stimulate the release of LH. This in turn upregulates the production of oestrogens and androgens, but this initial surge of hormones then acts on the pituitary to inhibit LH production. The end result is a reduction of testosterone levels to that of a castrated patient. These drugs are now administered as sub-cutaneous slow-release implants. The anti-androgens such as cyproterone acetate, flutamide and bicalutamide (Casodex) act in a similar way to tamoxifen in that they bind to hormone (androgen) receptors in the cancer cells and thus deny access to testosterone. 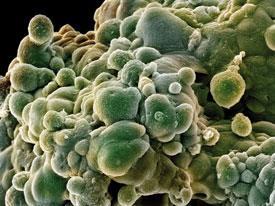 While these newer drugs have undoubtedly helped to improve the quality of life of prostate cancer patients by shrinking the tumours and easing the pain associated with metastatic deposits in the bones, they are not curative. The cancer cells eventually become resistant to the effects of the drugs and this was originally considered to be due to them becoming androgen independent. This is now known not to be the case and is instead due to the emergence of cancer cells that are exquisitely sensitive to the effects of minute amounts of testosterone still being produced (mainly) in the adrenals. The need for ever more imaginative ways of turning off androgen production was required, and the new drug abiraterone acetate appears to fit the bill.

Enter the team at the Institute of Cancer Research (ICR) in Sutton, Surrey, UK, led by Michael Jarman. They had been working for some time on novel inhibitors of the oestrogen-forming enzyme aromatase, and one of these - pyridoglutethimide - was shown to be a selective inhibitor of the enzyme. A collaboration ensued with Stephen Neidle and his group, also at the ICR, who used molecular modelling studies to rationalise this activity. It was suggested that the pyridyl group interacted with the iron of the haemin at the enzyme active site and prevented it delivering a hydroxyl radical to the C-19 methyl group. For a while my own group at the University of Reading, UK, was involved in this research, and we prepared several hundred grams of pyridoglutethimide and also resolved the compound into its two enantiomers. The compound eventually got as far as Phase I clinical evaluation before interest lapsed owing to the development of more potent aromatase inhibitors.

-hydroxylase-C17(20)-lyase from human testis. This enzyme is key to the conversion of cholesterol to androgens, so was assumed to be an ideal target for inhibition. A number of inhibitors of the enzyme were known at the time, and molecular modelling studies of one group of inhibitors, which were not steroids but did contain pyridyl esters, suggested that an extended conformation that allowed the pyridine nitrogen lone pair to interact with haemin could provide a credible target structure. Gerry Potter in the Jarman group had the bright idea to incorporate a pyridyl moiety into a steroid such that the nitrogen lone pair could interact with the haemin of the hydroxylase-lyase, just as it had done with aromatase. And they got lucky with their very first compound! Using a simple three-stage synthesis, Potter converted the readily available dehydroepiandrosterone-acetate into a novel pyridyl analogue of pregnenolone, which is the preferred substrate for the lyase from male testis. This analogue (which was later christened abiraterone) had phenomenal activity, having an IC50 of 2.9 nanomolar, while having very little inhibitory activity against aromatase (IC50 >20 micromolar), and did not affect the production of the essential corticosteroids by the adrenals. This was critical since this latter class of steroids is essential for maintaining fluid balance and many essential metabolic processes. Such a fantastic degree of selectivity was unexpected but highly desirable. 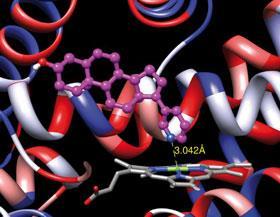 Minimised structure of abiraterone docked into the active site model of the enzyme 17?-hydroxylase-17(20)-lyase. The pyridine ring is observed to be close to the lower face of the haem group

Unfortunately, at this time research on prostate cancer was something of a ’Cinderella’ area, so funding for the pre-clinical evaluation was hard to obtain. However, the British Technology Group (BTG) had provided substantial funding for the work carried out by the Jarman group that had led to the discovery of abiraterone, so the drug was licensed to them. BTG initially out-licensed the drug to the German pharmaceutical company Boehringer Ingelheim, and initial Phase I clinical trials with abiraterone (as its acetate pro-drug) were carried out. Although these trials did show that the compound lowered testosterone levels to sub-castrate levels, there was a fear that the effects on corticosteroid levels and fluid balance would compromise use of the drug - though in the event this has not proved to be a problem. Boehringer Ingelheim eventually pulled out of the project, and BTG subsequently licensed the drug to US company Cougar Biotechnology in 2004 for subsequent clinical trials. 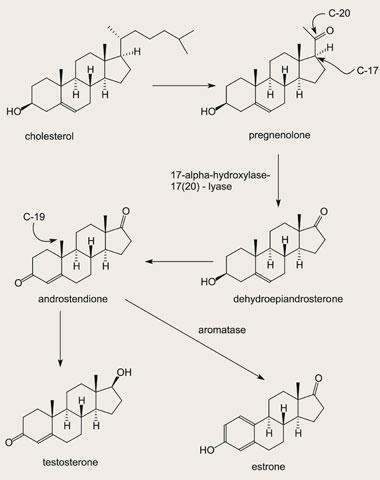 The steroid hormones are biosynthesised from cholesterol

The details of steroid hormone biosynthesis and an understanding of their complex interactions within the body only became clear in the 1960s, and the mechanisms of the various enzyme-mediated oxidations were not established until the 1980s. In outline, cholesterol produced in the liver is oxidatively degraded by a series of cytochrome P450 enzymes to produce pregnenolone and thence androstendione, and this is then the progenitor of both the androgens (mainly testosterone) and the oestrogens. To access the oestrogen family of hormones requires the services of yet another P450 enzyme called aromatase.

After the usual lengthy Phase I and Phase II clinical trials, in June 2009 the very positive results of multi-centre studies in the US, and in the UK at the ICR in conjunction with the Royal Marsden NHS Foundation Trust, were reported. The chief executive of Cougar, Alan Auerbach, announced that ’there is strong evidence of anti-tumour activity in patients with chemotherapy-na?ve disease as well as in patients with refractory prostate cancer. These patients represent significant unmet medicinal needs in prostate cancer.’ Following these exciting results, the giant US pharmaceutical company Johnson & Johnson agreed to buy Cougar for just under $1 billion (?600 million), gaining access to the drug as it progresses through Phase III evaluation. Of course there is still a way to go before abiraterone will be generally available for patients with prostate cancer, but if it successfully passes these final clinical trials it will the first new drug for a long while. Perhaps most interesting is that it was the product of some inspired guesswork based upon prior biological data for aromatase inhibitors, its mode of activity as a 17