The 19 nuclear power stations which provide a fifth of the UK’s electricity are growing old. By 2023, all but one will have closed down. The country will need to replace that lost electricity, but without emitting more carbon dioxide in the process. And the replaced electricity should be secure; preferably supplied within the UK.

No wonder the UK government wants to build more nuclear power stations, as explained in its energy white paper published in May this year. Ministers insist that no final decision on nuclear power will be taken until the end of 2007 while they wait for a controversial public consultation on the issue, due to finish in October. But environmental groups say the decision has already been taken to push ahead with a nuclear programme. In September, they made a formal protest by withdrawing from the public consultation, which they say is being rushed through too quickly.

It’s certainly true that government officials aren’t twiddling their thumbs while they wait for the public’s answer: four possible designs for the UK’s next fleet of nuclear plants are already being examined by the Health and Safety Executive, together with the Environment Agency (see boxes). If all goes smoothly, these will be reduced to three in 2008; it will take another four years before a design and site is selected, then a further five before a plant can operate. 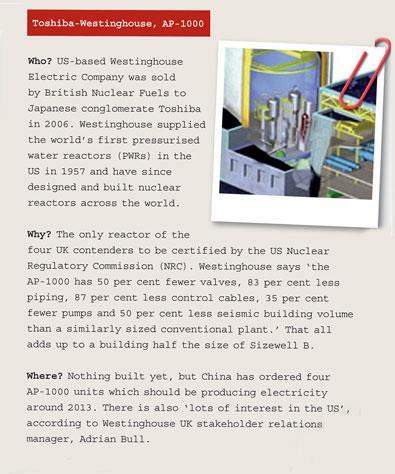 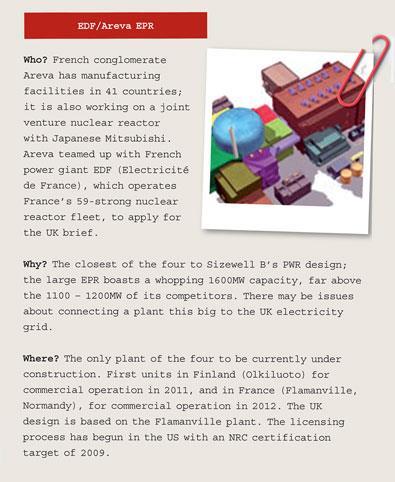 The UK has historically taken a pioneering approach to nuclear design (the world’s first commercial-scale nuclear power station opened in Sellafield, Cumbria, in 1956). No longer: the four designs now on offer were all developed overseas. They will be built and tested first in Japan, China, Finland, Canada, the US and France. ’It’s a good thing that the UK is not leading the way now,’ says Adrian Bull, US energy firm Westinghouse’s UK stakeholder relations manager. ’Every reactor built so far in this country has been one-of-a-kind, or parallel first-of-a-kinds, designed from scratch. This left us with a series of one-offs. But industry has learned that it’s easier to build later versions of an identical product, than the first.’

From a scientific point of view, the four designs on the table aren’t so much revolutionary as evolutionary. Christened generation III or III+, they are easier to operate, smaller, safer, and more efficient than their predecessors. Modern reactors are also designed with waste management and decommissioning in mind. Over their lifetime, they will generate only 10 per cent of the waste the UK’s nuclear sector has produced so far, the industry says. ’And when we built the first reactors, nobody gave a thought to how to pull them apart. We’re already thinking about decommissioning: designing space for the crane which will pull the reactor apart 60 years down the line,’ says Bull.

But their basic principles don’t differ much from the second generation pressurised water reactor (PWR), the popular economic choice adopted in 234 out of the world’s 439 existing nuclear power plants. Here, water flows around uranium oxide fuel rods (holding the fissile U-235 nuclei) encased in zirconium-alloy cladding. This primary circuit of water is heated to about 325?C by the nuclear fission reaction, so it must be pressurised to remain liquid. It transfers heat to a second, unpressurised, water flow, which turns into steam to drive a turbine. The water also acts as an efficient moderator, slowing down fast neutrons from nuclear fission so that they can react with further
U-235 nuclei.

The UK already has one PWR, Sizewell B on the Sussex coast, which will run until 2035. If familiarity with this technology is key, then of the four new contenders, the PWR models of Areva’s EPR or Westinghouse’s AP-1000 have the edge, says Paul Howarth of Manchester University’s Dalton Nuclear Institute. ’The EPR is most similar to the conventional PWR; the AP-1000 is more innovative,’ he says.

The innovation Howarth refers to is ’passive’ safety, pioneered by Westinghouse and now one of the defining features of generation III designs. This means relying on forces like gravity or convection to ensure the safety of the plant, rather than on mechanical pumps or electrical shutdown systems. In the AP-1000, for example, an emergency tank of cooling water sits above the reactor held up by powered valves; if the power shuts off, gravity ensures that water will flood the reactor.

Similar safety features are found in the two designs differing from the traditional PWR - GE-Hitachi’s economically simplified boiling water reactor (ESBWR) and AECL’s Advanced Candu Reactor (ACR-1000). The BWR, as its name suggests, differs from the PWR in that water flowing round the fuel boils directly to form steam, driving a turbine, before being condensed and pumped back round the fuel again. The Candu reactor is like a PWR, but uses heavy (deuterated) water as a more effective, if more expensive, moderator: it doesn’t waste neutrons by absorbing them, but is very good at slowing them down for further fission reactions.

It’s impossible to identify the best design as yet, since choosing the winner comes down to far more than sheer technology. Some key points for officials and utilities include safety, environmental impact, familiarity with technology, chances of job creation, company experience, mutually beneficial agreements, and ease of connection with the local grid, for example. 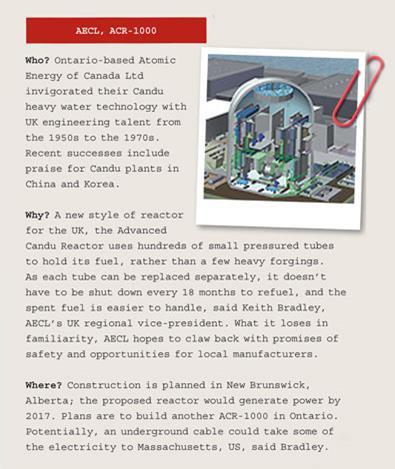 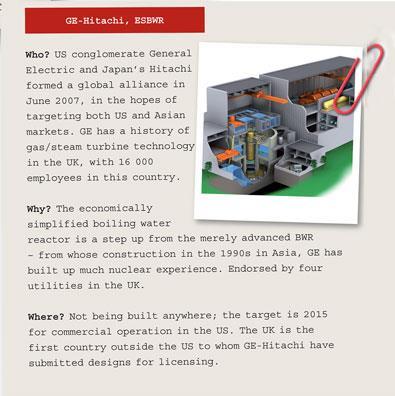 Once the evolutionary generation IIIs have run their course, some exciting new technology is planned for generation IV - a class of reactors still at the concept stage. The 10 countries that make up the Generation IV international forum have agreed to concentrate research on six promising systems, some of which they hope will be fully developed by about 2030.

These require some exotic-sounding materials, including coolants ranging from helium gas or supercritical water to liquid metals such as lead, bismuth, or sodium. One radical idea, the molten salt reactor, involves dissolving the uranium fuel in sodium fluoride salt coolant to improve efficiency.

This next generation of reactors should also be able to recycle much more of their spent fuel. Many generation III reactors are already able to run on reprocessed mixed oxides of uranium and plutonium (MOX) fuel, though the UK government isn’t keen to take advantage of this yet. Current UK policy is not to reprocess the plutonium waste from today’s reactors, stored at Sellafield, on the grounds that it would be uneconomic.

However, generation IV reactors will recycle not just unused U-235, Pu-239 and U-238, but also actinides as well as other radioactive fission products. Fast reactors even breed their own fuel, by optimising the process that occurs in every nuclear reactor, where non-fissile U-238 nuclei transform into fissile plutonium isotopes after absorbing neutrons.

Running out of uranium is a threat that generation IV - though not generation III - reactors may face. So far, says the International Atomic Energy Authority, reserves are ample - enough to fuel three times the world’s current nuclear capacity for 60 years - and at least 10 times these known reserves could be profitably mined.

Should uranium run short, though, thorium may take its stead. Far more abundant than uranium, the main isotope Th-232 is not itself fissile but absorbs neutrons to become the fissile U-233. Designs being tested by US company Thorium Power at Moscow’s Kurchatov Institute cover a uranium core in a thorium blanket.

These systems should be adaptable to today’s PWRs, and AECL are investigating thorium for its Candu reactors. India, which has about six times more thorium than uranium, has also concentrated on thorium in its own nuclear power program.

Which of these many future designs will make it to large scale plants can’t be guessed at yet. If the UK does decide to embark on a nuclear renaissance, there’ll be plenty more decisions to make.