Identifying the lost soldiers of Fromelles

More than 90 years on, recently found bodies of 250 soldiers who died during the Battle of Fromelles in the first world war need identifying. Richard Corfield investigates

More than 90 years on, recently found bodies of 250 soldiers who died during the Battle of Fromelles in the first world war need identifying. Richard Corfield investigates

At 6pm on 19 July 1916, around 6000 soldiers from the Australian 5th division and 3400 soldiers from the British 61st division went ’over the top’ into no man’s land near the small town of Fromelles in northern France. The action was intended as a diversion to the Battle of the Somme which was taking place about 50 miles to the south. By the end of the fighting the following day more than 1900 Australian soldiers and 500 British soldiers had died.

After the first world war, a cemetery and memorial - known as VC Corner - was erected near the site to remember the Australian soldiers who had fallen. The names of the soldiers buried there are listed on a commemorative wall - making this one of the few Commonwealth war memorials with no individual headstones. 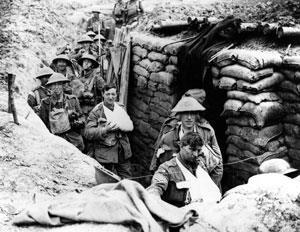 The site then remained largely unchanged for almost 80 years until Lambis Englezos, an Australian art teacher and amateur historian, visited the area in the early 1990s. Having studied the battle before he left Australia, Englezos could see that the number of men commemorated on the wall did not tally with the figure known to have died in the battle. There could be only one conclusion - some of the men were still unaccounted for.

It took several years’ work, but Englezos’ breakthrough came when he saw an aerial photograph dated 29 July 1916, held in the archives at the Imperial War Museum in London, UK. Comparison with aerial photographs taken just before the Battle of Fromelles showed that eight large pits had been dug in the days immediately following the battle next to an area of woodland - named Pheasant Wood - just behind German lines. 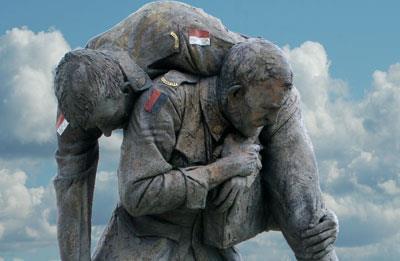 ’Cobbers’ statue at the Australian Memorial Park in Fromelles

Englezos alerted the Australian authorities, who then requested further information from the German Embassy in Australia. Archives held in Munich showed that approximately two days after the battle, German soldiers were ordered to dig pits to bury the bodies of the British and Australian solders that still littered the battlefield.

Armed with this new evidence, the Australian government commissioned a pilot investigation. And in 2008, the Glasgow University Archaeological Research Division (Guard) confirmed that there were human remains in the graves, and that there was corroborative artefactual evidence that these belonged to some of the missing soldiers.

The Australian and UK governments then requested a formal excavation of the bodies in the pits, accompanied by archaeological, anthropological and DNA profiling to assist in the identification of the dead men. The Commonwealth War Graves Commission (CWGC), a UK-based body who construct and maintain war cemeteries and memorials, was appointed to oversee the project.

It was also decided that the bodies would be reburied in a custom-built cemetery near where they fell - in keeping with CWGC policy. The new cemetery is currently under construction about 0.5km from the site of the mass graves where the soldiers’ bodies were found.

The excavation process was carried out by a team from the UK educational charity Oxford Archaeology, led by a biological anthropology specialist called Louise Loe.

Loe’s team started in May 2009, and by the time they finished in October they had retrieved the remains of 250 soldiers. Of the eight pits Englezos had identified in the 1916 aerial photographs, five were found to be full of bodies and a sixth was partly filled. Many artefacts such as buttons, buckles and badges were also found. 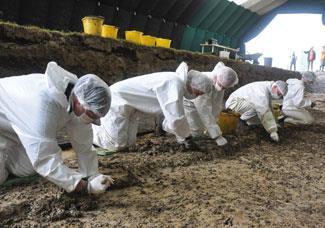 Excavations of the bodies from the pits at Fromelles

From a technical point of view the work was challenging because it combined elements of both forensic and traditional archaeology, explains Loe. ’The magnitude of the impact our results could have on waiting families who may have a relative who was buried there, is very different to the impact our discoveries about ancient human remains usually have,’ she says. ’In this sense, it is a humanitarian project, whereas you could argue that more traditional archaeology projects are educational.’

At every stage of the excavation the emphasis was put on preserving the dignity of the dead, Loe says. While the possessions were physically separated from the remains they belonged to during the excavation process for practical reasons, a tagging system meant that they can be reburied together.

Peter Francis, a spokesperson for the CWGC, reiterated the importance of the humanitarian aspect of the project. The overriding emphasis of the excavation and hopeful identification at Fromelles was to ensure that they got the same treatment and respect as their comrades who had been found and laid to rest in the immediate aftermath of the Great War, he says.

Using anthropological analysis, Loe’s team were able to estimate how old the men were when they died. But to formally identify them, the DNA of the soldiers needs to be matched to that of their modern day ancestors. And this work is currently being carried out by LGC Forensics based in Teddington, UK, under the supervision of independent DNA consultant Peter Jones. 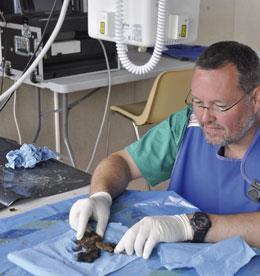 There are various established ways for matching DNA, but the approach taken by the LGC team is to look at two sets of genetic markers, one on the Y chromosome and the other on mitochondrial DNA, that have very little possibility of crossover and a low rate of mutation through the generations.

One of the complications is that because many of the soldiers died so young, they would not have left behind any descendants. Looking at both the Y (male) chromosome and mitochondrial DNA (which is passed down only through the female line), allowed the scientists to match the dead to more distant family such as the descendants of siblings or even cousins and great-cousins.

For this reason a large part of Jones’ job has been developing family trees, to identify the most likely living candidates to provide a DNA sample against which to match the DNA from the soldiers of Fromelles.

The task is harder still when you remember that only 250 sets of remains have been recovered, and 1500-1600 soldiers were missing after the battle. This means that many of the DNA samples provided by the living relatives are not relevant. Another complication is that only about half of the families of the missing have come forward to provide DNA samples. As the soldiers start to be identified and named by the LGC team in the coming weeks and months it is hoped that more people will come forward for profiling.

The search for DNA has focused on the soldiers’ teeth rather than their bones, explains James Walker, the scientist in charge of the LGC Forensics laboratory team performing the analyses. While his team extensively tested bones initially, better results were achieved from teeth because the layer of enamel covering teeth provides some protection against the soil-borne nucleases which break down DNA into progressively smaller fragments.

So far results have been encouraging. In the majority of cases they have recovered DNA fragments in excess of the 300 base pairs ideally required for identification from both Y chromosome and mitochondrial DNA. This is particularly gratifying because nuclear (ie Y chromosome) DNA is much less abundant and more easily degraded than mitochondrial DNA. The main DNA analysis of the soldiers has now been completed, Jones says, and the profiling is almost complete.

The bodies are to be reburied before the identification is complete, and once an unequivocal identification has been made the headstone of the soldier will have his name, rank and regiment appended to it in keeping with the protocols of the CWGC.

While the identification process is proceeding well, the approach used for the DNA analysis has proven to be a point of controversy within the scientific community. Alan Cooper, director of the Australian centre for ancient DNA at the University of Adelaide, believes that what he calls the ’forensic approach’ taken by the LGC team is mistaken. His central argument is that he believes that this was a job for a university-based ancient DNA lab like his, and that universities were effectively precluded from tendering for the process by the inbuilt requirement imposed by the project design that the graves be treated ’like a crime scene’.

Walker, however, says that it is entirely proper that the site should be treated in that manner, ’At the end of the day these bodies have been underground, and to preserve the integrity of the samples it is quite relevant to treat it like a crime scene. As soon as you have individuals trampling about at [these] sites DNA can get shed and this extraneous DNA can be transferred onto items and bodies there.’

Indeed the 300 base pair approach mandated by Jones seems to be working well, suggesting that there was no need for the more sophisticated, experimental and time-consuming techniques advocated by Cooper. Part of the requirement imposed by the Australian and British governments was that the analyses should be completed as quickly as possible to expedite giving the soldiers a timely burial. 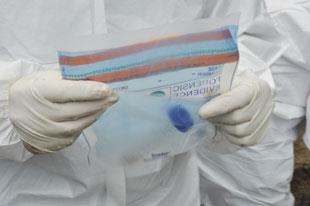 A forensic approach is being taken to the DNA analysis

And there is another important factor that was made clear by Jones. ’We are not talking about one or two bodies here - if we had been, then a university lab might have been appropriate. We are talking about 250 sets of remains and it is vital that the strictest levels of accountability be met. That makes it appropriate for it to be handled by a forensic DNA lab. The bar [of the tendering process] was set quite high and I make no apology for that.’

Walker agrees, ’The importance of having a forensic organisation doing the work is to do with continuity of samples. We have the ability to set up protocols to ensure that whatever samples are taken from those remains are transferred to our laboratory and processed with a secure system for tracking the samples and knowing what happened to them. Universities are very good at developing techniques and doing research but they are not set up for doing testing which will be scrutinised to show that the sample being processed has definitely come from the source material.’

In the meantime the pits at Pheasant Wood have been backfilled, reploughed and seeded with grass. By the time of the commemorative service planned for 19 July 2010 -? 94 years to the day after the Battle of Fromelles began - a wild-flower filled meadow will stand where once hundreds of Australian and British soldiers lay. And the lost soldiers of Fromelles will finally be at peace.

Richard Corfield is a freelance science writer based in Oxford, UK