There is a new driving force for the growth of the chemical industry in the north-east of England.

There is a new driving force for the growth of the chemical industry in the north-east of England. 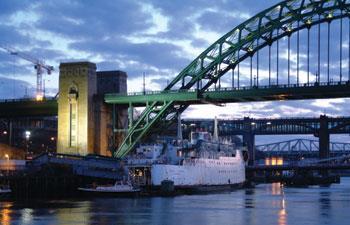 When the industrial giant Imperial Chemical Industries (ICI) put down its substantial roots in the north-east of England in the 1940s, it was lured by the region’s transport links, skilled workforce and chemical heritage. Today, the same attributes are valued by key players that have followed ICI’s example, including GlaxoSmithKline (GSK), Merck Sharp & Dohme (MSD), Pfizer, BP and BASF. But now an additional factor is drawing chemical giants to the region: the presence of the North East Process Industry Cluster (Nepic).

’Nepic was born in April 2005 to represent the whole of the region,’ says Ian Mains, the organisation’s development manager. That includes not only chemical companies, but also consultancies, engineering, financial, legal, logistics and other businesses that fundamentally support the chain. ’It was established with a true supply chain philosophy,’ he says. 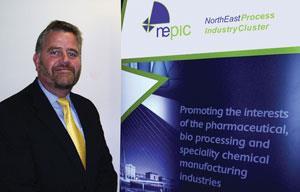 Following ICI’s decision to sell off its commodity chemical businesses in the 1990s, the region suffered from a lack of a coherent support structure. Recognising the problem, regional development agency One NorthEast called in consultants, who recommended the merger of the Teesside Chemical Initiative (TCI) and the Pharmaceuticals & Specialities (P&S) Cluster, two groups that were already operating in the region. The result was Nepic.

Given the importance of the process industry to the region, such centralised support was desperately needed. Some 400 chemical, pharmaceutical, biotechnology and speciality companies are clustered around Newcastle-upon-Tyne and Wilton, a considerable number for a geographic area of just over 2000 square miles. The north-east process industry represents more than 25 per cent of the region’s total economy. The sector directly employs 34,000 people, and an estimated 280,000 jobs are indirectly dependent on it.

There are currently nearly 300 companies in the cluster, Mains says, but the aim is to increase that number to 400 in the near future. While these companies operate in a wide range of markets, they face many of the same strategic issues. Nepic’s role is to streamline the points of contact for all the industry initiatives for its members, and to put process industry at the heart of the local development strategy. ’We act as the glue that pulls it all together,’ says Mains.

Nepic’s activities are funded by government agencies and membership fees from the companies that make up the cluster. All activities fall under the remit of one of six strategic thrust teams: innovation; skills and education; marketing and communications; trade and investment; manufacturing and productivity; and closing the wealth gap between the north-east and the rest of the UK. These teams are populated by top executives from member companies. Their aim is to stimulate economic activity for the region, coordinate activities of strategic importance to the region, and promote the capabilities of the industry. 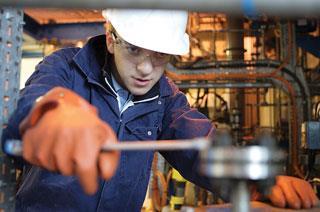 Nepic’s education team aims to bring apprenticeships back into fashion

According to Stan Higgins, chief executive of Nepic, tapping into the expertise of these senior industrialists plays a major role in the success of these initiatives. ’The key to our success is the level of engagement of the top people from these companies working in our strategic thrust teams,’ he says. Importantly, as chief executives of global companies, they have the power to implement strategic decisions that really make a difference to the cluster. As an example, ’the manufacturing and productivity team has already identified ?400 million of productivity improvement opportunities,’ Higgins says.

Nepic’s member companies have joined up to achieve one aim in particular: to increase the region’s gross domestic product (GDP). The north-east is ?9 billion short of the UK regional GDP average - only Cornwall comes lower in the GDP creation league - and the strategy is to bring the region up to the national average. ’Our goal is to increase the region’s GDP by ?2 billion by 2015,’ says Mains. It’s an ambitious target, set as a challenge to Nepic by One NorthEast, but the member companies are confident that it can be done. In fact, the plan is to exceed expectations, says Stan Higgins. ’In five to six years, we believe that we will increase the region’s GDP by ?5 billion.’ Nepic has drafted a growth strategy for the process industries in the north-east, which identifies up to ?9 billion of investments earmarked for the region. ’This will generate 20,000 jobs in the region over the next five to six years,’ Higgins predicts.

He explains that the trade and investment team works tirelessly to attract further investment in the north-east’s industry, and link members to new trade and marketing opportunities. For example, during the Informex meeting for chemical manufacturing industries held in San Francisco, US, earlier this year, Nepic showcased the region’s capabilities. ’We already have signed contracts worth ?300,000 as a result of identifying opportunities for member companies at this meeting,’ says Higgins.

But he is concerned that a looming skills shortage could threaten the future that is being so carefully constructed for the region. ’Companies are struggling to find graduates,’ Higgins says. ’A key challenge for Nepic is to enable companies to fill the skills gap.’ He points to several contributing factors. Children in the UK are turned off by science and engineering, while government policies in recent years to promote university attendance have eroded the vocational pathway to scientific professions. ’It’s a serious problem,’ Mains agrees. ’Apprenticeships are going out of fashion.’

A new school of thought

Nepic’s skills and education team is addressing this key issue with the Children Challenging Industry and Primary Science Enhancement programmes, in which children from local schools visit chemical plants in the cluster to experience science firsthand. ’[These programmes] aim to improve the perception of science amongst children and teachers,’ Mains says. He explains that member companies want school leavers to consider entering industry straight from school. To this end, Nepic is distributing DVDs to secondary school children that highlight careers in the process industry sector and promote the vocational routes to these careers. ’These have proved to be very popular,’ Higgins observes. 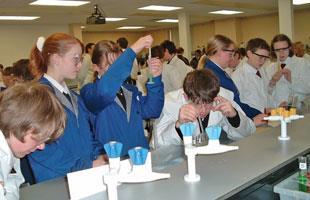 Further addressing the skills shortage, Nepic is campaigning for a Process Industry National Skills Academy (Pinsa), which will provide first-class skills training at all levels for the region’s industries, with a focus on employer-endorsed vocational learning. ’We hope to become the sixth industry sector to have its own skills academy,’ Higgins says. The business plan for the new Academy will be put to the Learning and Skills Council and the UK Department for Education and Skills for ministerial approval in May 2007. Many members have already pledged a considerable amount of their training budgets to establish Pinsa. Higgins is cautiously optimistic. As a result of Nepic’s efforts to create a collective voice for the process industry, he says, ’the government is now fully behind the industry in the north-east.’

The labour force for the sector is fuelled by the region’s five universities, which also provide Nepic’s innovation team with a rich source of ideas. Mark Lewis, technical manager for Nepic, explains that innovation is not just about new inventions, but also about improving existing technologies. For example, by developing methods to increase the speed at which companies can change over from one process to another during manufacturing, ’Nepic has already improved the output performance of local companies by up to 30 per cent,’ he says.

The north-east is also leading the way in the field of renewable energy, he explains. ’The region has moved rapidly to encourage investment from biofuel plants,’ says Lewis. ’The science and technology base in the region makes it the logical place for these facilities.’ Recent years have seen the rapid growth of biofuels activity in the region; the Biofuels Corporation has built the UK’s largest biodiesel plant on Teesside, while Ensus recently secured funding for a ?250 million bioethanol facility at Wilton. Resource efficiency is another key driver for members, says Lewis: ’one man’s waste is another’s raw material.’ In a similar vein, Nepic aims to improve industrial processes from an environmental perspective. ’We want to make sure that we don’t have a bigger environmental footprint than we need to,’ he says.

Nepic’s growth strategy will generate 20,000 new jobs in the region

Informing stakeholders and potential new business partners of Nepic’s activities is the remit of the marketing and communications team. ’We have really picked up on the publicity angle,’ says Higgins. The website now receives over 100,000 hits a month, he says, and a number of publications keep members informed of news across the region’s industry. According to Mains, approximately 3000 copies of each issue of the bimonthly newsletter are distributed to member companies, the Department of Trade & Industry, MPs and MEPs. ’And of course the Prime Minister gets a copy,’ he says. Nepic plays a key role in lobbying for the industry, as demonstrated by the activities surrounding Pinsa, and Mains points out that it also works closely with local MPs and MEPs on legislation.

Members are clearly passionate about promoting the north-east as a location for the process industry. Their enthusiasm and activities act as a catalyst for attracting new companies and investment to the region. According to Higgins, ’the key thing about Nepic is that it has really raised the profile of the industry in the UK.’