Can a bit of simple chemistry command the clouds? Richard Van Noorden reports

Can a bit of simple chemistry command the clouds? Richard Van Noorden reports 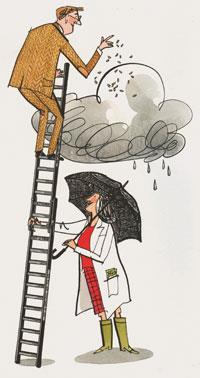 When crops are struck by drought and reservoirs lie empty, why not force the sky to pour down some of its water? For millennia, we could only hope, pray, and dance to the heavens in hope of refreshment. But since the concept of sprinkling small particles into clouds to encourage rainfall was invented in the 1940s, making rain has entered the realms of commercial technology.

Dozens of countries now have cloud seeding programmes, alongside other areas of weather modification such as fog-clearing or storm diversion. Apart from increasing groundwater stocks, cloud-seeding is used to suppress hail damage and to empty clouds of water so that rainfall doesn’t fall in the wrong place - a trick that China recently claimed to have used to protect the Olympics opening ceremony.

Depending on the type of cloud researchers hope to seed, particles of silver iodide or hygroscopic salts can be fired into the sky using ground rockets, or dispersed from aircraft. Silver iodide (glaciogenic) particles are dumped into clouds full of supercooled water, where they act as nuclei around which water will freeze to form ice; silver iodide and ice’s lattice structures being similar. The hope is that these heavy ice particles then fall as snow or rain. Dry ice, also, can help to freeze water - though it must be dropped from above a cloud.

For warmer, lower clouds, hygroscopic salts such as calcium chloride encourage larger liquid droplets to form - again with the aim of altering a cloud’s makeup so that it bursts.

’There’s a high level of proof that we can modify cloud structures under the right conditions,’ says Duncan Axisa, president of the US Weather Modification Association. The knottier problem to grapple with, though, is showing that this gets more water where you want it. ’Evidence for significant and beneficial changes in precipitation on the ground as a result of seeding is controversial and in many cases cannot be established with confidence,’ states the World Meteorological Organization (WMO). An influential 2003 report for the National Academy of Sciences in the US came to a similar conclusion.

Yet the China Meteorological Association, for example, claims that its country created 250 billion tonnes of rain between 1999 and 2006, using around 7000 anti-aircraft guns, 5000 rocket launchers, and more than 32 000 trained personnel. ’I, like others, am sceptical about the Chinese claims. I doubt they are even equipped to be able to substantiate them,’ says Axisa.

The WMO says countries spend more time on cloud-seeding operations than on testing out the fundamental science. Rigorous research is hard to do - though it’s vastly aided by modern innovations such as polarimetric radar that can build up more accurate pictures of cloud structure and precipitation. A major difficulty is that it is hard to know how clouds would have behaved if they hadn’t been seeded.

A $9 million (?4.8 million) five-year experiment in Wyoming, US, began in 2006 - attempting to seed clouds in winter, to build up the snowpack for use in summer. Counters on the ground have already detected ice nuclei that came from seeding generators, says Bruce Boe, director of meteorology at the company Weather Modification, in North Dakota, US, who have been hired to run the project. 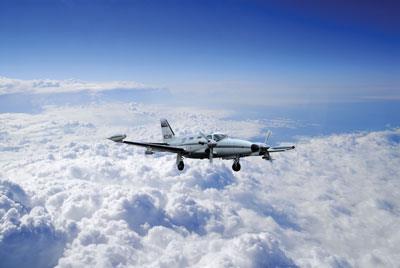 Glaciogenic particles dumped into clouds act as nuclei around which water freezes, and hopefully falls as rain or snow

Reassuringly, studies so far suggest that the silver iodide currently dumped into clouds doesn’t seem to be causing environmental problems - the silver added to Wyoming snowpacks reaches 10 parts per trillion at most - where the average natural background is four parts per trillion.

Knock-on effects on the rest of the water cycle - or downwind from seeded clouds - aren’t causing much concern, perhaps because they aren’t yet well-studied. Another factor to bear in mind, as Boe points out, is that unintentional cloud-seeding on a massive scale has been going on since industrial times - from pollutants and aerosols. The effects of these on all kinds of weather - let alone rainfall - are still poorly understood.

The wrong sort of clouds

Slowly but surely, researchers are learning more about which clouds can and can’t be seeded, and at which temperatures and humidities. The glaciogenic seeding of clouds formed by air flowing over mountains (so-called orographic clouds) offers the best prospect for increasing precipitation. And clouds have to be caught young - with lots of supercooled water but few already-formed ice nuclei. ’We can give you an idea of where it might be possible to have more rain - but it would be foolhardy right now to make definite predictions for an area or talk about "controlling" the rain,’ concludes Boe. ’You still have to deal with what nature gives you.’