In the quest for better therapeutic drugs, scientists continue to look at natural products for inspiration. The imino sugars show particular promise, as Robert Nash explains.

In the quest for better therapeutic drugs, scientists continue to look at natural products for inspiration. The imino sugars show particular promise, as Robert Nash explains.

Nature’s remedies are increasingly popular among the modern-day consumer. For example, Echinacea products are often used to treat common colds or coughs. However, when subjected to a more rigorous scientific analysis, the findings about the plant’s usefulness are mixed, with clinical trials of Echinacea-based products sometimes showing good activity and sometimes not. Undoubtedly, this discrepancy stems from the fact that the active component hasn’t been reported yet and so cannot be measured in the products. Even though considerable effort has been put into analysing Echinacea by many academic labs and companies, the active component remained elusive.

Help in this kind of plant-remedy mystery is at hand, according to UK company MNL Pharmaceuticals Limited, which is expert in analysing and isolating the water soluble components of plants and has now found the active immune modulator - a chemical which can promote or inhibit immune responses to treat a disease - in Echinacea. Using their technology and expertise, effective immune modulator pharmaceuticals are being developed from Echinacea and other plants, ranging from bluebells to potatoes.

The first generation imino sugars have shown their therapeutic potential for a wide range of diseases such as cancers, HIV, herpes, inflammation, allograft tissue rejection, bone marrow protection in chemotherapy and treatment of inherited lysosomal storage disorders which were previously fatal in childhood. Since then, a second generation of imino sugar drugs has been able to overcome the lack of specificity that the first generation had, and which caused some unnecessary and unpleasant side effects such as inhibiting gastrointestinal glycosidases leading to diarrhoea. Exciting new applications are also being explored that make use of immune modulation activity, with potential therapeutic uses being: improved vaccine efficacy (and reduced side effects); chronic viral infections; broad cancer use; and alleviating allergy/asthma.

The natural imino sugars first appeared when an ’anti-biotic’ was isolated; the glucose analogue nojirimycin, from a Streptomyces filtrate in 1966. After this discovery, 1-deoxynojirimycin (DNJ) was found in mulberry leaves in 1970. Systematically these alkaloids have been described in the literature as derivatives of their parent heterocyclic compounds or sugars, eg 1-deoxynojirimycin (2 S-hydroxymethyl-3 R,4 R,5 S-trihydroxy-piperidine or 1,5-dideoxy-1,5-imino- D-glucitol).

DNJ is a more potent inhibitor of α-glucosidases than nojirimycin and is also more stable. Subsequently, DNJ was derivatised and approved for use in diabetes treatments, eg miglitol ( N-hydroxyethyl-DNJ), and very recently as N-butyl-DNJ for treating Gaucher disease, a glycosphingolipid lysosomal storage disease. The discovery of the indolizidine alkaloids swainsonine and castanospermine (1979-1980) started to arouse a real interest in imino sugars as potential drugs because they were more potent glycosidases inhibitors (mannosidases and α-glucosidases respectively) and because they show in vitro anti-viral activity and in vivo anti-cancer activity. Both these compounds and DNJ were able to inhibit specific glycoprotein trimming reactions of asparagine-linked oligosaccharides and since their discovery the potential therapeutic applications for these first natural products and their derivatives have been extensively researched. Proven activity against HIV has already been shown for N-butyl-DNJ and 6- O-butyryl-castanospermine and activity for both has been seen in many other disease models. 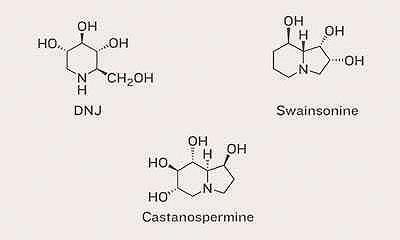 Swainsonine has been primarily studied for anti-metastatic activity and other anti-cancer uses including protecting bone marrow in combination therapy with cytotoxic drugs. The main limitation for DNJ and castanospermine derivatives in treating viral infections has been the unacceptable gastrointestinal disturbance through glucosidase inhibition that was experienced at the required high doses. Swainsonine has had similar problems because it is a potent inhibitor of both the presumed target enzyme for therapeutic effects (Golgi Mannosidase II) and non-target mannosidases ( eg lysosomal mannosidase). Remarkably none of these compounds appear to cause severe problems by alterating the glycoprotein function of ’normal’ cells throughout the body. Swainsonine exerts at least some of its therapeutic effects through modulating the immune system, including activating natural killer T cells. DNJ and castanospermine interestingly appear to reduce the immune response of the Th1 T cell (by reducing interferon gamma production), at least in vitro, which would be expected to reduce anti-viral applications and potentially lead to suppressing protective responses to viruses and some cancers.

A synthetic chemistry programme at Oxford University, UK, headed by George Fleet has shown that apparently removing all glycosidase inhibition does not remove the immune modulation. Oral availability, tissue distribution and retention are still good without the two lead compounds (one a glycosidase inhibitor and the other not) being significantly metabolised. MNL is gathering activity data using in vivo models for vaccine adjuvant, anti-viral, anti-cancer and anti-asthma/allergy applications and and plans the early partnership of some of these. The vaccine adjuvant application puts the imino sugars in competition with oligonucleotides but with the advantage of oral availability and much lower molecular weights. Interestingly, the lead compounds appear more active in vivo than in vitro, probably because of long tissue retention, but also because the important and complex carbohydrate interactions in in vivo situations are impossible to generate in vitro.

Robert Nash is visiting professor at the department of pharmaceutical sciences at the University of Strathclyde, UK, and Research Director of MNL Pharmaceuticals Limited.